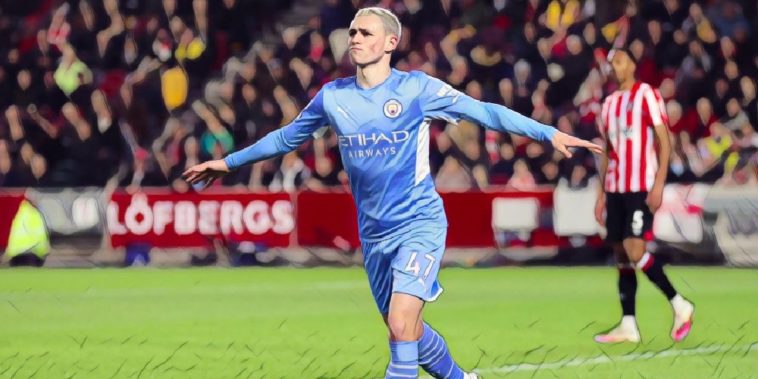 Manchester City head into 2022 with a comfortable eight-point advantage at the top of the Premier League following a 1-0 win over Brentford in West London.

Brentford carved out a few very decent openings in the opening 15 minutes, forcing Ederson into a couple of saves while Joao Cancelo cleared a deflected effort off the line.

Pep Guardiola recalled Jack Grealish and Phil Foden to the starting XI, the pair having been dropped for two games after enjoying a night out following the 7-0 win over Leeds. Seconds after the clearance off the line, City raced up the other end to ruthlessly take the lead, Kevin de Bruyne’s inch-perfect delivery from his trademark inside right position picking out the run of Foden who expertly finished first time to give the league leaders the lead.

Foden had the ball in the back of the net again just after the interval, the England international heading home Gabriel Jesus’ cross, only to see a flag rightly raised for offside.

While they dominated possession and created by far the more chances, Man City didn’t look at their excellent best, with Pep Guardiola looking anxious on the touchline with the scores still finely poised.

With three minutes to go, City thought they had netted the goal that would give them the desired breathing space, though Aymeric Laporte’s excellent header was also ruled out for offside.

However, they would manage to see out the remaining minutes of the game and Guardiola was pleased with his side’s display against an ‘organised’ Brentford side, describing them as ‘the best team in the Premier League’ at what they do.

A beautiful delivery from the Belgian and @ManCity open the scoring at Brentford! #PLonPrime #BREMCI pic.twitter.com/4KqVR2RJyJ

“For the way they played it was the best performance,” he told BBC Sport. “We cannot play better when they play in this way. They were high pressing and it made it difficult for us to build up. After when they defend deep it is incredibly difficult as they are so organised. You cannot go inside as there are no spaces. When a team defend this way it is so difficult. You see how the other teams come here and they suffer. I know it. How many chances they create from corners, from throw-ins. We didn’t concede once or a shot on target in the second half.

“People expect that we will score four goals after 23 minutes. That is not the reality, that is the exception. The reality is this type of game.

“In some games you have to play one way, in others you play a different way. If you play quicker than usual they can make the transition with Ivan Toney and the other guys and you suffer. They create the counter-attacks and free-kicks and throw-ins and at this they are the best team in the Premier League. Statistically, this is the best team. We compete and we adjust something at half-time.”

Liverpool’s defeat to Leicester on Tuesday coupled with Brighton’s late equaliser against Chelsea earlier on Wednesday evening saw City open up an eight-point gap to their title rivals, who face each other at Stamford Bridge on January 2nd. However, Guardiola wasn’t taking the advantage for granted.

“There are 54 points to play for,” he insisted. “It is not expected to have this distance for eight and nine, but Liverpool play one game less. But it is 54 points.

“In December no one is champion. We are going to lose games. I see in my mind, Arsenal, Chelsea, Southampton coming.

“We have a game in London against Arsenal, maybe one of the top teams right now. The best Arsenal in the last four or five years. I cannot say more than congratulations to the team but we must focus.”