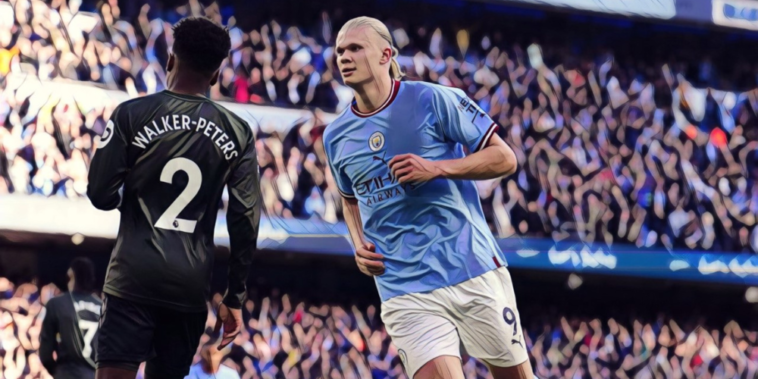 Pep Guardiola has hailed Erling Haaland as ‘one of the best’ he has coached following the forward’s phenomenal start at Manchester City.

Haaland has been in sensational form since signing for City from Borussia Dortmund during the summer with the 22-year-old having scored 20 goals in all competitions this season.

It has taken the Norwegian just 13 games to reach that total, one which has already included three Premier League hat-tricks. Haaland’s arrival has provided City with a potent option at centre-forward and Guardiola was asked whether the forward’s arrival had changed his side.

“If it happens [change] then it works so far,” Guardiola told his pre-match press conference ahead of City’s Champions League clash with Copenhagen.

“He understands quickly and he is a nice guy. He is able to do this for the team, but we need to work together and that has happened. He is one of the best. I have many very, very good strikers and Erling is one of them. I speak a lot about him, but sometimes I should not have to because the numbers, they do this.”

Nathan Ake was also present to address the media and joined Guardiola in his praise of Haaland. The Dutch defender admits his teammate has ‘all the attributes’ and poses a difficult challenge in each training session.

“He has all the attributes. Sometimes you come up against strikers who have some great attributes, but he has them all. He has left-foot, right-foot, he is strong and he has pace. It makes him very difficult. Everyone is in a very good place and he is getting a lot of press and importance, but he continues to work in training and demands from himself and it shows what kind of team we have.

“It is a good challenge (training against Haaland). Training is a little bit different to the games, of course, but it is a good contest. He is difficult to mark and he can do so many things. For us as defenders, training is about knowing where he wants to get the ball and where we can play to him. He has got so many attributes.”