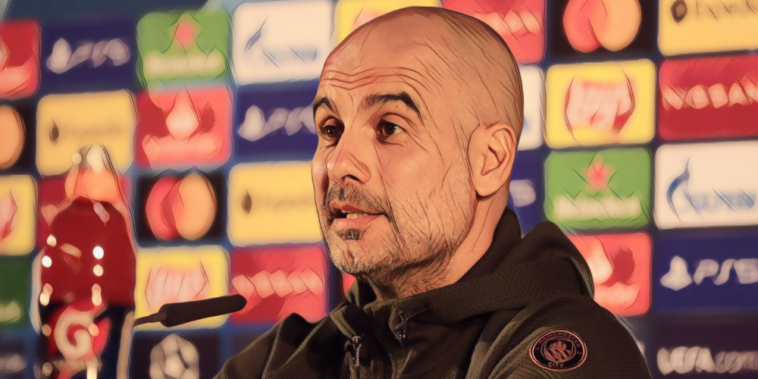 Pep Guardiola has discussed his ‘drive’ to win the Champions League as Manchester City prepare to begin their group stage campaign against RB Leipzig.

Guardiola has twice won the competition during his time with Barcelona, but success with Man City in Europe has so far eluded the Spaniard with last season’s final defeat to Chelsea proving an agonising near miss.

City will once again start the tournament amongst the favourites, but face a difficult-looking group containing Leipzig, fellow favourites PSG, and Club Brugge.

Guardiola has opened up on his desire to make an impact in this season’s Champions League and says City will once again do all they can to win a maiden European crown this season.

“We’ve made a step forward, improved on previous seasons.

“We deserved to win against Porto and lost the final. People say we’re a failure, which is incredible with what we achieved last season.

“We played so well but then lost the final. We’ll try to win – like every team in this competition. I’m not going to tell you which team will win.

“We have to prepare well, continue the rhythm from [wins over] Norwich, Arsenal and Leicester City.”

Guardiola also discussed the strengths of Leipzig ahead of their visit to the Etihad tomorrow, with the Bundesliga side now under the management of Jesse Marsch following Julian Nagelsmann’s move to Bayern Munich.

Leipzig reached the semi-finals of the Champions League two seasons ago and Guardiola is anticipating a difficult challenge.

“Leipzig are always very good,” said Guardiola. “They have strong a philosophy.

“They have young players, who are dynamic, physical and strong. One step at a time.