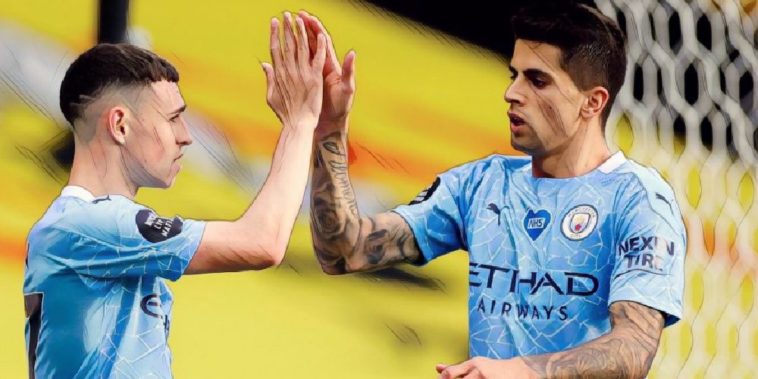 Pep Guardiola admits he has been ‘delighted’ with the recent progress of Joao Cancelo following a difficult debut season for the Manchester City full-back.

The Portuguese international became the most expensive full-back in history when signing for Man City from Juventus last summer but has struggled to adapt to the demands of English football, making just 12 league starts and failing to establish himself as a first-team fixture at the Etihad.

The 26-year-old impressed after being given a starting opportunity in the 4-0 win at Watford on Tuesday and Guardiola has taken note of Cancelo’s progress in training since the Premier League‘s restart, suggesting there is much more to come from the full-back after a period of adaptation.

“The most incredible thing from Joao is now he is a completely different individual from when he arrived. We need time to understand each other, him to me and the team and me to him too,” Guardiola said at his post-match press conference.

João Cancelo’s first half vs. Watford by numbers:

“What I want is his behaviour that he is doing after the restart.

“Unfortunately for us, when we came back to restart he was the best player in the training session and was incredible, and unfortunately he had a little problem on the dangerous part of his leg and he was stopped for a while, but all I want with Joao is this happiness in the training session, and a relationship with his team mates because we know the quality that he has.

“With his happiness in the training sessions, he is going to help us a lot in the next seasons. He understands us better than the beginning and we understand him better.

“Sometimes you need time and now he is happy. He is an incredible communicator; we are delighted in the last few months what he is doing with us.”