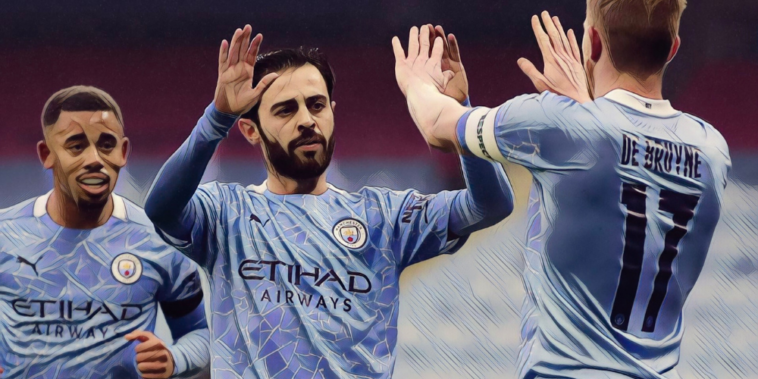 Pep Guardiola has lavished praise on ‘intelligent’ Bernardo Silva and admits he has been delighted by the Manchester City midfielder’s return to form.

Silva starred during Man City‘s 3-0 win over Birmingham in the FA Cup’s third round last weekend, scoring twice against the Championship side including an exquisite opener at the Etihad.

It was a welcome return to form for the Portugal international whose standards have slipped since an excellent 2018/19 campaign which saw him named as City’s Player of the Season, falling out-of-favour and starting just seven league fixtures for the club during the current campaign.

Guardiola admits he was ‘delighted’ with Silva’s latest display in the win over Birmingham, however, and suggested the ‘intelligent’ playmaker will have a big role to play for the club over the second half of the season.

“Bernardo is so intelligent, he can play everywhere,” Guardiola said at his pre-match press conference.

Wait for that weighted pass from Mahrez for the second goal 🤤 pic.twitter.com/9K5sYJMBOL

“He understands the game perfectly, he knows exactly what he has to do and where to play so there are no doubts.

“He’s back and I’m incredibly delighted for the two goals he scored and we need him.”

City return to Premier League action tomorrow evening when they face Brighton at the Etihad, with Guardiola’s side currently four points adrift of league leaders Liverpool ahead of the clash.

The Spaniard confirmed that Raheem Sterling has no injury despite being left out of the squad last weekend, though Sergio Aguero will miss the clash with the forward isolating after coming into contract with someone who has tested positive for Covid-19.