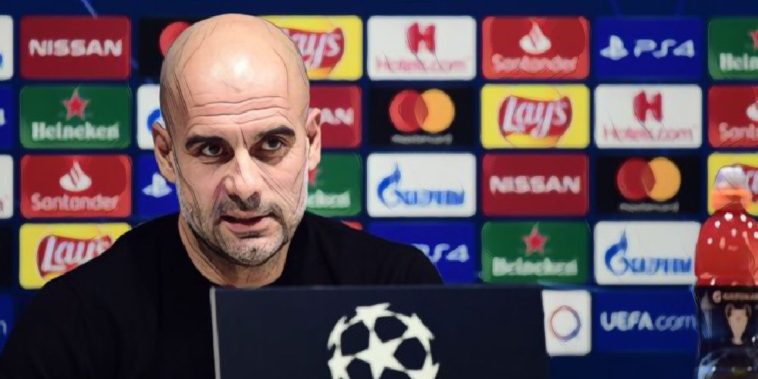 Pep Guardiola has shouldered responsibility for Manchester City’s Champions League exit last season and insists he is looking to ‘solve the little gaps’ as the club prepare to begin this season’s European campaign.

Guardiola has endured a wretched recent record in European club football’s biggest competition where he has failed to progress beyond the quarter-finals since arriving at the Etihad four years ago, Man City surprisingly crashing out to Lyon in the last eight of last season’s tournament.

The Spaniard is currently preparing his side for their group stage opener against Porto tomorrow night and has reflected on the dismal display against the French side, his side punished following an error-prone performance in a game Guardiola has described as ‘a tough moment’.

Guardiola admits he feels ‘responsible’ for their exit and is determined to improve this time around, as City look to finally end their wait for a maiden Champions League crown.

“It was a tough moment,” Guardiola said at his pre-match press conference. “I felt so responsible for this, how the club fought and the players and still now I feel so responsible.

“We have to accept the reality that we were not good enough. We didn’t play bad, we played good moments and had our chances but we made mistakes that you cannot do in this competition and go through.

“The reality watching in the past expectations of every club and manager has to dream with high expectations but the reality we didn’t perform at the level needed to get through in this competition. We have to accept it with humility and when we accept this it is the best way to improve, to go through, and accept the new challenge this season to try again knowing that we have to improve.

“This competition is so demanding. I feel so bad for the players but this is a new chance and we will start at zero again.”

Guardiola feels that his side are ‘close’ to success in the tournament despite their failings in recent seasons, a habit of conceding goals in clusters proving their undoing in eliminations to Monaco, Liverpool, Tottenham and Lyon.

He believes that only small mistakes have hindered his side’s chances of success in Europe thus far, suggesting he is confident City can take ‘the next step’ and make an impact in the latter stages this season.

🗣️ Guardiola: "Sergio is training well and we are happy." 😃

“For clubs used to being in the latter stages is easier but I know the success of this club and the next step is to make a step forward in the Champions League.

“Now is a new opportunity and I believe more in the wish and desire that we had. In this competition, you have do to things a little differently to how we have done but when you review the games – even Liverpool when we lost 3-0 or Tottenham or Lyon – I always felt we were not far away.

“None of them were that better than us but we have to solve the little gaps and when you don’t solve it it is because you don’t deserve it. It is the best way to improve.”