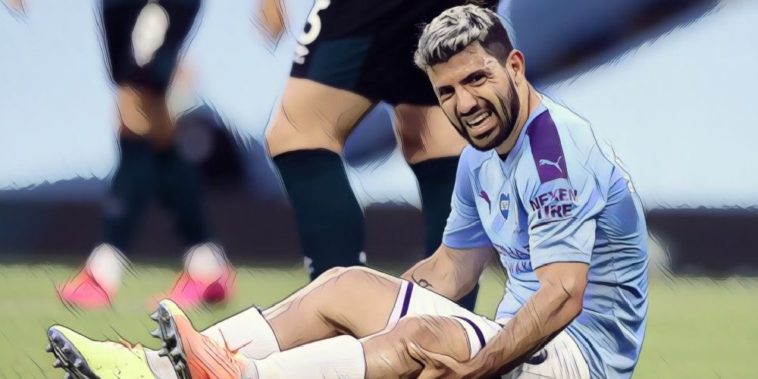 Pep Guardiola admits Sergio Aguero’s knee injury is a big blow to Manchester City’s hopes of winning the Champions League for the first time this season.

The Argentina international limped off during the Man City‘s 5-0 thrashing of Burnley on Monday night and now looks set to face an extended spell on the sidelines.

Aguero flew to Barcelona to see a specialist for the procedure and says everything ‘went well’, though his participation in the latter stages of the Champions League remains in doubt following the surgery.

Todo salió bien y pronto comenzaré con la recuperación. Muchas gracias al Dr. Cugat y a su equipo y a todos por tanto apoyo//Everything went well, and I'll soon begin recovery. A big thanks to Dr Cugat and his team – and to all of you for your support 🤟🏽 pic.twitter.com/Frm07cN3WF

City currently lead Real Madrid 2-1 on aggregate following the first-leg of their last-16 tie in Spain, and Guardiola admits the potential loss of the club’s all-time record goalscorer is a huge blow to his side’s hopes.

“Of course the impact is big,” the Catalan said in his pre-match press conference ahead of tonight’s game against Chelsea. “To win the Champions League you have to arrive in the best moment, in the best condition as possible, but at the same time the situation is what it is. Sometimes when this happens teams make a step forward with other players to solve situations, so that is what we have to do.”

UEFA have announced revised plans for the latter stages of Europe’s leading competition with the tournament set to be played over a short period in Lisbon in August.

All of the Quarter-finals, semi-finals and the final are set to be played over one leg in the Portuguese capital, with fixtures to be played between August 12-23 at Benfica’s Estadio da Luz and Sporting Lisbon’s Estadio Jose Alvalade.

City must, however, overcome 13-time winners Madrid with the second leg of that tie scheduled for either August 7/8, though Guardiola is unsure on whether he’ll be able to call on the services of Aguero.

“Hopefully he can help us against Real Madrid – and if we’re good enough to go through, maybe [too] for the next rounds.”

Aguero’s absence leaves Gabriel Jesus as the club’s only recognised senior forward, however, Guardiola insists his squad have various options to replace the prolific Argentine in the coming weeks.

“We don’t have any doubts about Gabriel,” he said. “The only doubt is that not one single player can play every three days. Raheem can play in this position, even Gündogan and Bernardo. Not like a [proper] striker but we can use them.”