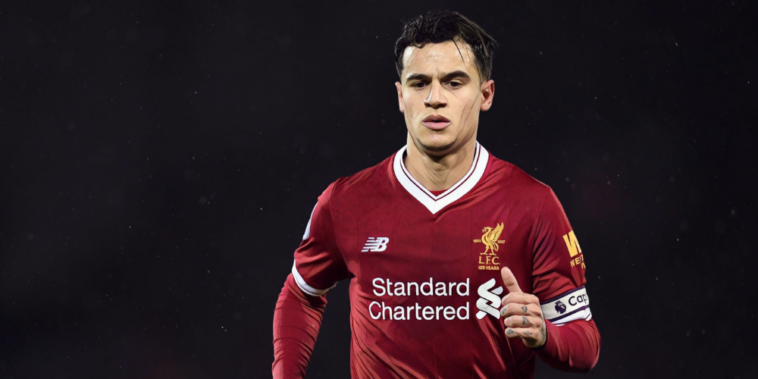 As thousands of fans push themselves through turnstiles and pack into Premier League venues, it’s with a sense of anticipation and in the hope that the next ninety minutes delivers something unforgettable.

For those of a Liverpool persuasion, the nimble feet and repertoire of tricks from Philippe Coutinho so often proved worth the admission fee alone.

In an era in which English football has become ever more cosmopolitan, Coutinho represented the best of a brilliant football nation.

Brazil has a long and storied history of producing elite talents, footballers who take to the pitch and express themselves without constrains, always willing to try something out of the ordinary to gain an advantage.

Coutinho’s arrival into the Premier League came in the closing stages of the 2013 January transfer window, with Brendan Rodgers gambling on the young midfielder as he sought to inject some flair into a mediocre Liverpool side.

Rodgers had been in charge for six months and with Liverpool languishing in seventh sanctioned deals to sign Coutinho from Inter Milan and Chelsea’s Daniel Sturridge.

Coutinho had been earmarked as one of Brazil’s brightest talents following his emergence at Vasco da Gama, but the inevitable move to Europe had failed to work out as hoped as he struggled to make an impression at the San Siro.

There were bright moments, including a fine performance in a 4-3 win over Tottenham in the Champions League. He was loaned to Espanyol and thrived in Spain, but his return to Inter once again saw him fail to dislodge senior stars and the Nerazzurri opted to cash in when an £8.5m offer arrived from Anfield.

It was a decision the Serie A side would come to regret.

Despite his slight stature he soon made an impression at Liverpool, with his sublime first touch and eye for a pass seeing Coutinho form an instant understanding with Luis Suarez and fellow winter window signing Sturridge.

Operating from the left, the sight of Coutinho cutting inside and inter-linking with the front two became a familiar one as he grew in confidence in England.

The 2013/14 season saw him shifted inwards as part of a midfield diamond, as Liverpool came close to ending their long wait for a Premier League title.

With Steven Gerrard reinvented in a regista role and Coutinho and Raheem Sterling buzzing behind the twin threat of Sturridge and Suarez, Liverpool scored 101 goals on their way to a runners-up finish.

Coutinho had shown flashes of his brilliance, including a winner in a pulsating clash with City at Anfield, but he was soon to take on a more prominent role.

Liverpool’s title-chasing team had been rapidly dismantled in the year that followed the club’s near miss. Luis Suarez departed for Barcelona in 2014, whilst the following summer saw the fading force of Steven Gerrard leave for Los Angeles and Raheem Sterling move on to Manchester City.

Coutinho was now the leading light and it was a spotlight he began to revel in.

He ended the 2014/15 season on the shortlist for the PFA Player of the Year award despite a return of just five goals, with his very finest this outrageous effort against Southampton.

Some footballers possess a signature strike and for Coutinho it’s this, a shift inside from the left channel and hit that seems hell-bent on finding its way into the stantion as soon as it leaves his magical boot.

Bonus marks for the added aesthetic of the ball cannoning in off the crossbar, here.

The failure to repeat the club’s title challenge and a poor start to the following campaign saw Rodgers replaced at Anfield, with the Reds naming former Borussia Dortmund coach Jurgen Klopp as his replacement.

The infancy of Klopp’s reign saw Coutinho’s role questioned and debate as to whether the fleet-footed and free-spirited Brazilian would be able to adjust to his new manager’s demands.

Klopp’s side were entertaining and expansive, whilst retaining the vulnerability that simultaneously creates excitement and denies challenges for major honours.

Coutinho continued to shine, however, adding a sprinkling of Samba to Klopp’s heavy-metal football.

He was instrumental in the Reds’ run to the Europa League final, scoring a brilliant individual effort as Manchester United were eliminated in the first-ever European meeting between the two North-West rivals.

A signature drop of the shoulder left Guillermo Varela in his wake, before an audacious scooped finish from an acute angle bamboozled David de Gea and secured Liverpool’s passage to the next stage.

He scored 12 goals in all competitions that season with his highlight reel becoming ever more spectacular, earning a second successive club Player of the Season award before enjoying the best individual season of his career in 2016/17.

Whether used as a central number ten or drifting inside from the left he found a way to influence proceedings, with his velvet first touch and remarkable ability to chop and change direction leaving a trail of defenders in his wake.

So often he would accelerate from a standing start down the left before – in the knowledge more athletic defenders were chasing him down – shifting the ball inwards with the outside of his boot, using the unbalanced momentum of the chasing challenger to free himself infield for a shooting chance.

He added a derby day special to his increasing collection of fantastic finishes in April 2017, scoring the second with a stunning solo goal in a 3-1 win over Everton. It was Coutinho-esque in its entirety, the demanding of possession and a twisting and turning drive towards goal before a bending finish into the far corner.

Liverpool ended the season fourth and secured a return to the Champions League, but faced a fight to keep their leading light as Barcelona made their interest public.

Despite the midfielder’s desire for a move to Catalonia and a strong approach from Barcelona, the transfer window passed with Coutinho remaining on Merseyside.

He had become the fulcrum of the side, the centre-piece of an improving outfit that now boasted various avenues to goal.

Mohamed Salah had arrived from Roma during the summer, whilst Sadio Mane and Roberto Firmino helped form a forward contingent soon christened the ‘Fab Four’.

Even in a season that saw Salah shatter the Premeir League’s goal record, the first six months of the campaign saw Coutinho retain his title as Liverpool’s leading light.

He scored a fabulous free-kick in a chaotic 3-2 win at Leicester in September, a goal that encapsulated his penchant for producing something out of nothing.

The following month saw him add another trademark stunner from distance at Newcastle, with the Magpies making the mistake of affording the Brazilian far too much room as he cut inside.

Standing off Coutinho had become a recipe for disaster.

The goals were the highlight of performances that became ever more impressive, with Coutinho appearing as if he had pillows on his feet when the ball arrived in his possession and a rocket launcher when it left.

As the winter window approached, Liverpool were forced to once again bat away questions regarding Coutinho’s future. The threat of Barcelona’s interest had only temporarily been removed, with the Catalans again lurking as January approached.

Klopp did all he could to persuade Coutinho to remain a part of his improving side, handing the Brazilian the captan’s armband as he fired home a first career hat-trick during a 7-0 thrashing of Spartak Moscow in the Champions League.

He later warned Coutinho about the pitfalls of leaving Liverpool for Spanish football’s superpowers, but in the end the temptation of Barcelona proved too much and in January a £142m deal was agreed – representing a record sale for Liverpool.

“Stay here, and they will build a statue in your honour. Go somewhere else, to Barcelona, to Bayern Munich, to Real Madrid, and you will be just another player. Here you can be something more.”

Coutinho began brightly in Barcelona, but his fortunes soon deteriorated as he fell out of favour. Medals have come in the form of two La Liga titles, whilst he also won a Bundesliga treble, DFB-Pokal and Champions League treble during a loan spell at Bayern Munich in 2019/20.

On each occasion, however, he has found himself on the outside looking in.

Liverpool have moved on in his absence and have claimed Premier League and European honours on their own, whilst his recent return to English football at Aston Villa means there will be a reunion in the near future.

Steven Gerrard, a teammate during Coutinho’s early emergence, will be tasked with coaxing the best from the Brazilian and the Villa fans will hoping there is more spellbinding magic to be exhibited in front of the Holte End.