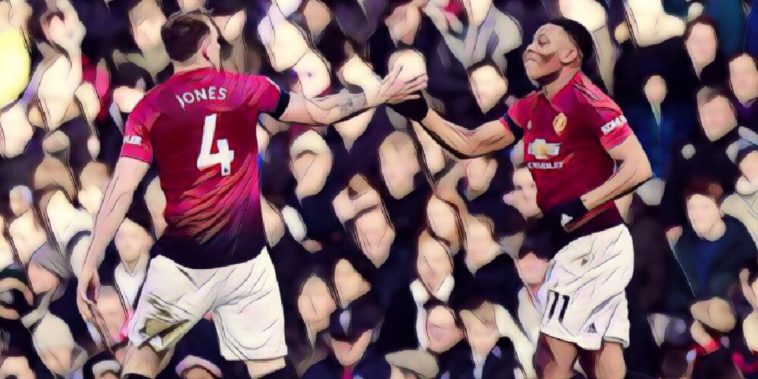 Manchester United cruised to a fifth consecutive away Premier League win at Craven Cottage, brushing Fulham aside via another Paul Pogba masterclass.

The 3-0 win was also a fourth consecutive away clean sheet for Ole Gunnar Solksjaer, and Manchester United look better defensively with every passing game.

The away crowd was in fine form today, as it continuously belted out thunderous renditions of “Ole’s at the wheel” and “Tony Marshall came from France”.

With one eye on the midweek clash against PSG, Solksjaer rested crucial players like Rashford, Lingard, Young and Lindelof. After a lively start by Fulham where Luciano Vietto missed a golden opportunity inside the first minute, United settled into a comfortable rhythm.

Martial played Pogba in for the opener, with the Frenchman burying the ball past Sergio Rico with a ferocious left-footed strike. Martial himself doubled the lead 9 minutes later with a composed finish at the end of a brilliant run from inside his own half.

The game was put to bed with Pogba’s second of the match from the penalty spot, after Le Marchand brought Mata down inside the area.

Here are 5 talking points from the match:

Back 4 doesn’t work for Fulham

Claudio Ranieri has recently experimented with a back four in the second halves of the matches against Palace and Brighton, and he went with a 4-4-2 from the start today.

While Callum Chambers and and Jean Michael Seri enjoyed a decent first half in midfield, Denis Odoi had an absolute nightmare at right back, as did Le Marchand.

Odoi has played as a full back in the Championship before, but he was culpable for both of United’s first half goals. The Belgian was initially caught out by Martial’s ball for the first goal, and failed to rein in the 23-year-old as he embarked on a solo run for the second.

The Cottagers looked visibly better in the second half after Schurrle was taken off for Cyrus Christie, and Ranieri is unlikely to persist with this system.

Chris Smalling started his first match today since the reverse fixture at Old Trafford on December 8th, having limped off in the second half of that game with an injury.

He started off a bit shaky after allowing Mitrovic to head the ball across goal early on, before recovering to put in a composed performance alongside Phil Jones, who signed a new four year contract earlier this week.

This will give Solksjaer a welcome selection headache, with four fully fit and in-form centre backs to choose from. Lindelof and Bailly are likely to start against PSG thanks to their ball-playing abilities, but Smalling and Jones are both great options to have on the bench.

It also raises question marks over Marcos Rojo’s future. The Argentine has been suffering from injuries throughout this season, having made only two league appearances. He’s unlikely to start at centre back or left back once he returns, and it looks increasingly likely that he’ll leave Old Trafford in the summer.

Paul Pogba’s brace today means that he now has eight goals in his last eight Premier League matches taking his total tally for the season to 11.

This is his career-best record of league goals in a single season so far. In fact, the 25-year-old has never breached double figures for goals scored, not even during his time at Juventus when he won four Serie A titles.

The France international is currently the form midfielder in the English top-flight. Considering that he wasn’t even in the starting XI in Mourinho’s final few matches in charge, that is a remarkable turnaround in a short period of time.

The sheer impact he has on games is incredible, and he’s arguably in the form of his life. PSG will wary, and rightfully so.

All not well at the Cottage, as home crowd turn on Ranieri

Optimism was high amongst Fulham fans when the lovable Claudio Ranieri took over from Slavisa Jokanovic in November, with the Craven Cottage Faithful hoping that the experienced Italian coach would be the perfect man to steer their talented squad clear of the relegation zone.

However, that initial goodwill seems to have run its course with the home support openly hostile towards Ranieri today, even serenading the former Leicester boss with chants of ‘you don’t know what you’re doing,’ when he decided to replace attacker Andre Schurrle with defender Cyrus Christie and revert to a 3-5-2.

Part of the problem is Ranieri’s decision to consistently leave crowd favourites Ryan Sessegnon and Ryan Christie out of his starting XI, but even more alarming was his sides complete lack of fight or desire during the second period, with the game played at an almost testimonial pace at times.

During his sides recent 4-2 comeback win over Brighton, Fulham showed tremendous passion and drive to claw victory from the jaws of defeat, but with Ranieri’s side showing no such spirit today, and with the crowd having turned on their manager things are looking decidedly bleak for the West London outfit.

On today’s evidence it’s hard to see Fulham making up the seven points required to climb out of the relegation zone, and Craven Cottage will more than likely be playing host to Championship football next season.

For Manchester United, Top Four is now an expectation

What seemed like an unattainable milestone under Mourinho has become a reality under Solksjaer.

The three points against Fulham has now propelled the Red Devils past Chelsea into fourth place. The Blues themselves face City at the Eithad tomorrow, a match which seems stacked in Pep Guardiola’s favour considering the current form of both sides.

While United still have to face Liverpool, Arsenal, City and Chelsea in the Premier League, the sheer momentum they have built up over the last few weeks should be enough to secure Champions League qualification.

Speaking of the Champions League, they might not get a better chance to defeat PSG. They can’t seem to put a foot wrong at the moment, and the French champions will have crucial players in Neymar and Marco Verratti ruled out with injuries when they visit Old Trafford on Tuesday night.