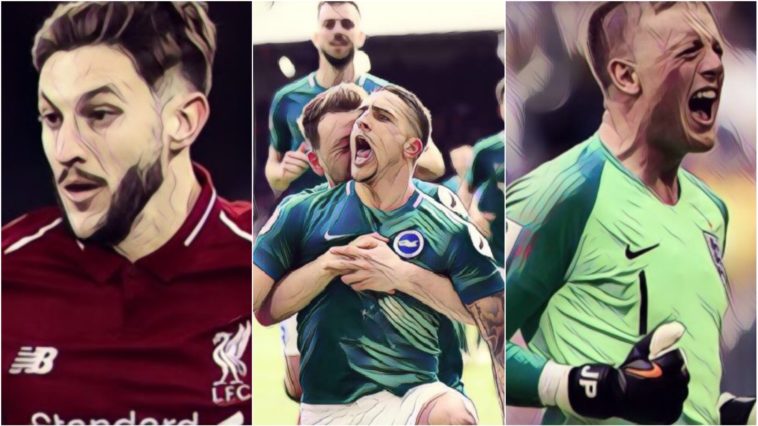 Featuring an assault on Jack Grealish, a reignited spark in Liverpool’s midfield, a wonder goal from Brighton, a delightfully crap performance from Everton’s goalkeeper, and a dance lesson from a Southampton supporter.

Jack Grealish getting decked from behind by a pitch invader was one of the more unsavoury scenes we’ll see this season, and with any luck the appropriate punishments will be meted out.

One thing I think we can all have a chuckle at from the Aston Villa vs Birmingham City game is the fact that Grealish himself scored the winner, jumping into the away end as ecstacy took over and everyone went bloody mental. Then, as a few eagle-eyed observers noticed, this happened:

One of the stewards just got arrested for pushing Grealish😂😂 pic.twitter.com/bBouLsod40

One steward, in an attempt to get the mass of Villa players back on to the pitch, pushes Grealish (and may have even kicked or nudged him with his knee, although the video is inconclusive) over the barrier. Moments later that same steward is escorted away by the police.

It was an amusing and unprecedented sight, one which did not result in the man in question being arrested, according to the West Midlands Police.

Did you know that Adam Lallana is 30 years old? I bet that passed you by, a bit like the past few years of his career. And so, when it was revealed that Jurgen Klopp had placed the injury-plagued midfielder in the starting line-up there was widespread disbelief and bewilderment at his inclusion. “Has he gone mad?!” was the collective reaction of supporters.

The selection was entirely justified, however, with the Englishman putting in a tireless shift to help the Reds put three vital points on the board in the Premier League title race. Sure, he may not have scored or assisted on the day, but he was as influential as any other player over the weekend.

You wouldn't describe it as a world class performanc, but Lallana was very influential today. Silenced a few doubters. pic.twitter.com/2jdFmmSVdK

On two occasions his pressing lead to goals, giving the Liverpool midfield the kind of energy and impetus that it has been sorely missing since the start of the new year. There were more spectacular performances this past week, but few worked as hard as Lallana. And it could have a big impact on the run-in.

It was another good week for goals, but none of them were quite as satisfying as Anthony Knockaert‘s strike in the A23 derby, possibly the worst name for a rivalry since El Trafico.

The French winger’s beautifully curled long-range effort went in off the post, giving Brighton the winner against Crystal Palace at Selhurst Park.

Just his second goal of the season, Knockaert’s strike was his last touch of the game before being subbed off, satisfied with his contribution to an important win for the Seagulls, which brings them level with Palace on points.

I love everything about this: Paul Pogba’s inch-perfect 30-yard pass lands right on Romelu Lukaku’s shoelaces, whose first touch is just gorgeous.

People talking about Lukaku playing in Timberlands and man is out there bringing balls down like this. Stop it. pic.twitter.com/A0OKwURP6W

Did anyone have as bad a day at the office as Jordan Pickford? England’s number one could consider himself extremely lucky in the first half, dropping an easy catch before avoiding a red card for a rugby tackle that led to a penalty, which he saved before Richarlison scored down the other end. Crisis: averted.

The worst missed call of the season.

Pickford fumbles the ball and spear tackles Rondon giving away the penalty. Should’ve got a red right?

And by yellow card….. I mean no card.

The ref didn’t even give him a card 😧 pic.twitter.com/m3Cx5WYADR

In the second half though, Pickford made a hames of an incoming ball, but the chance went a begging for Newcastle United and the Everton goalkeeper stuck his tongue out afterwards to wind up the home crowd. That would come back to haunt him.

After conceding a Salomon Rondon goal in the 65th minute, Pickford parried a long-range shot from Miguel Almiron straight to the feet of the waiting Ayoze Perez, who scored the equaliser as a result. It only got worse, as Perez completed the comeback three minutes later with the winner.

The third goal should have been flagged for offside, but Newcastle would have felt hard done by with the earlier decision by Lee Mason to not send the Toffees’ goalie off. In the end they’re probably happier with how it worked out and took gleeful delight in the Sunderland native’s calamities.

Manchester United goalkeeper David De Gea may have copped a lot of flak for conceding Arsenal’s first goal on Sunday, but as it turns out Granit Xhaka is a dab hand at long-range efforts.

6 – Six of Granit Xhaka's seven Premier League goals for Arsenal have come from outside the box, including both against Man Utd. Swerve. #ARSMUN

As ever, plenty of candidates for the biggest donkey in football this week; you could pick any one of referee Lee Mason, Jordan Pickford, or the pitch-invading Birmingham fan, among others. But we’ll go with ol’ reliable, Paul Merson.

Earlier this week Merse said that Callum Hudson-Odoi should not leave a “top club” like Chelsea for a pub team like Bayern Munich, because, and I quote, “you’re going to get into the team sooner or later.” Well then, sign me up for game after game on the bench so I can someday pull on a blue shirt for more than ten minutes at a time, he must be thinking.

“I wouldn’t leave, Chelsea is a top club and he’s playing with top players.” 🔵

“Bayern are an ageing team, they are not the club they were 5-6 years ago.” 🇩🇪

Merson also suggests that Hudson-Odoi can win things at sixth-placed Chelsea, something he couldn’t possibly do at the reigning Bundesliga champions for the past six years. But yes, Callum, stay at Stamford Bridge because anything outside of the Premier League doesn’t really exist to Merse.

See Also: What next for Gareth Bale? Three possibilities for the Welsh winger