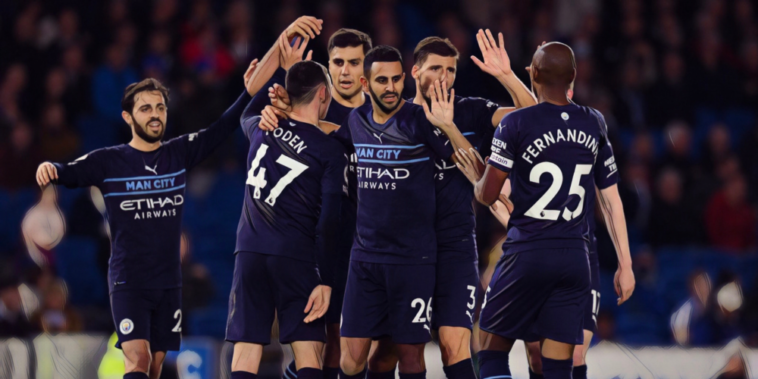 Phil Foden starred once again as Manchester City claimed a convincing 4-1 win over Brighton, following a blistering first-half display at the Amex.

The champions had gone into the game full of confidence after thrashing Club Brugge in the Champions League in midweek and they started brightly again on Saturday evening, almost taking the lead inside ten minutes through the returning Gabriel Jesus, only for Lewis Dunk to pull off a miraculous goal-line clearance to deny the Brazilian.

That intervention mattered little, in truth, as City took the lead just moments later through Ilkay Gundogan, the German international prodding into an open net after Bernardo Silva had capitalised on Robert Sanchez’s blunder.

That lead was then extended just before the half-hour mark as man of the moment Foden continued his fine recent form, with the Englishman rounding off a blistering counter attack after Silva had threaded through Jack Grealish with an exquisite pass.

It got even worse for the hosts just minutes later as Foden once again got on the scoresheet, albeit somewhat fortuitously, with the ball deflecting off the 21-year-old and deceiving Sanchez in the Brighton goal, following Jesus’ initial strike.

There had only been one place separating the two sides in the table heading into the game, yet there was simply a gulf in class in the first half, although Graham Potter’s side responded well after the break, with Leandro Trossard seeing his fizzing effort squirm wide off of Ederson.

That pressure from the hosts eventually told as they pulled a goal back from the penalty spot through Alexis Mac Allister with just over ten minutes to play, after the Argentine’s fellow substitute Enock Mwepu had been clumsily brought down by the opposition stopper.

That proved to be a mere consolation, however, as the visitors wrapped up the win in the final minute of stoppage time, with Foden turning provider to slide in substitute Riyad Mahrez, who duly lashed home on his lethal left foot.

Following that deserved victory – which sees City move up to second and just two points behind leaders Chelsea – star man Foden admitted his side were happy to get the result after what was a difficult second-half.

“In the end we got the result.

“I had to tell him [Gabriel Jesus] that it nicked off me [for Foden’s second goal], he hadn’t realised. A goal is a goal. Sometimes if you’re in the right place you get that bit of luck.

“We’re not a team who usually sit back but they put us on the back foot in the second half. We got the result. That’s the main thing.”

The trip to the South coast saw the youngster lining up in a false nine role, having previously starred both on the wing and in midfield for club and country of late, with the 21-year-old admitting he doesn’t know his best position.

“I don’t know where my best position is. I’m enjoying wherever I play, learning new positions.

“We’re on a good run of form. We’re working so hard in training to get things right.”

Man City are next in action away at West Ham United in the Carabao Cup on Wednesday evening, before they host Crystal Palace in the Premier League on Saturday.