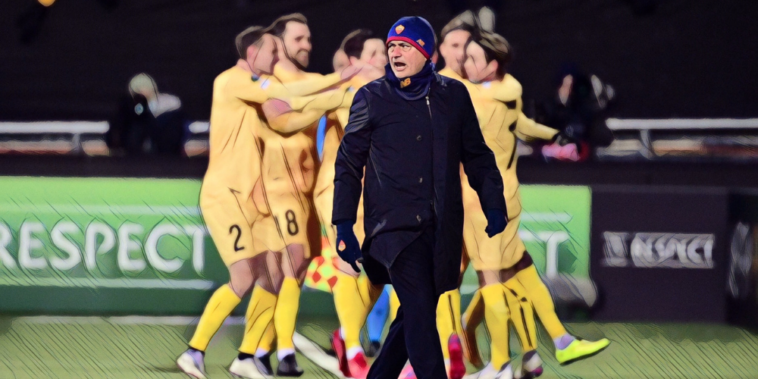 Roma were thrashed by Norwegian side FK Bodø/Glimt in a nightmare performance from Mourinho’s men, with the Portuguese coach suffering the worst defeat of his managerial career to date.

It was an evening the ‘Special One’ will be seeking to soon forget as he looks to bring success to Roma this season, and following his side’s humiliation we’ve decided to look at some of the worst defeats suffered by Mourinho-managed teams.

Mourinho’s arrival at Chelsea proved the catalyst behind the club’s emergence as England’s dominant force, leading the west Londoners to successive Premier League titles in each of his first two seasons in charge.

Chelsea were unrivalled across those first two seasons of Mourinho’s reign, though suffered a shocking setback at Middlesbrough on their way to the second of those league title successes.

Mourinho had lost just two of his previous 63 fixtures in the Premier League, but saw his side overwhelmed on a humbling afternoon at the Riverside.

Fabio Rochemback capitalised on some slack defending to open the scoring after just 78 seconds for ‘Boro, with the struggling North East side doubling their lead before half-time through Stewart Downing.

Yakubu then scored a fine third after outmuscling John Terry, sealing a memorable Middlesbrough win and inflicted Mourinho’s joint-biggest defeat of his managerial career at that time.

Robert Lewandowski’s iconic performance all but ended Mourinho’s time in charge at Real Madrid, as the Borussia Dortmund forward produced a finishing masterclass in this unforgettable Champions League semi-final tie.

Lewandowski scored all four goals as the Bundesliga side thrashed Mourinho’s Real Madrid at the Westfalenstadion, becoming the first player in history to score a Champions League hat-trick against the Spanish giants.

The Poland international opened the scoring from Mario Gotze’s cross, before poking a second past Diego Lopez after Cristiano Ronaldo had levelled for the visitors.

Lewandowski’s hat-trick goal was the best of the lot, showing fine footwork inside the box before lashing home an unstoppable finish, and he completed his four-goal haul from the penalty spot in a ruthless display of finishing.

The result increased the pressure on Mourinho as he sought to win a European Cup and appease a demanding board, but Dortmund progressed despite losing the second leg as Real and Mourinho parted ways at the end of the campaign.

Mourinho endured a humiliating return to his former side as Chelsea thrashed Manchester United in 2016, the west Londoners inflicting a biggest ever Premier League defeat on their former manager.

Pedro opened the scoring after just 30 seconds to open the floodgates at Stamford Bridge, as Chelsea dismantled the Red Devils in a dominant performance in the capital.

Gary Cahill smashed in a second after 21 minutes to double the Blues’ lead, before second-half goals from Eden Hazard and N’Golo Kante completed a miserable first return for Mourinho since his second sacking at Chelsea in December 2015.

The home crowd revelled in a comprehensive victory for their side, aiming jibes in the direction of Mourinho with chants of “you’re not special anymore”.

Mourinho’s first ever El Clasico ended in humiliation as Real Madrid were thrashed by their greatest rivals, losing 5-0 in the Camp Nou in a result that will live long in the memory.

Real had entered the clash top of the division after making an unbeaten start to the season under their new manager, Mourinho having galvanised the side following his arrival from reigning European champions Inter Milan.

However, the task facing Mourinho in toppling Pep Guardiola’s Barcelona side was made abundantly apparent following a chastening evening in Catalonia, as the home side ran riot to score five times without reply.

Lionel Messi produced a scintillating showing as early goals from Xavi and Pedro put Barcelona in control of the contest, before David Villa’s second-half brace put the result beyond all doubt.

Jeffren added a fifth in stoppage-time, with Sergio Ramos’ late sending off compounding a nightmare performance from the capital club.

Roma’s disastrous defeat to FK Bodø/Glimt was the first time a Mourinho side has ever conceded six goals in a fixture, with the Italian side embarrassed by modest opposition during their Europa Conference League campaign.

FK Bodø/Glimt won the Norwegian Eliteserien for the first time in their history last season, but were still expected to pose little problem for a Roma side amongst the biggest clubs in the newly-formed Conference League.

Goals from Erik Botheim and Patrick Berg put the home side into a shock two-goal lead, though Carles Perez’s strike reduced the deficit before half-time as a weakened Roma looked to mount a comeback.

Hopes of overturning the result were ended following a calamitous second-half showing, however, as the Norwegians scored four times to inflict the heaviest defeat of Mourinho’s 1,008-game managerial career.