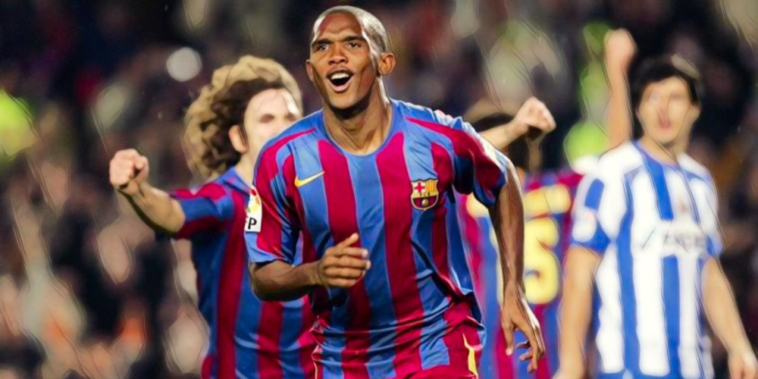 Barcelona and Inter Milan meet in the Champions League this evening in a fixture between two of European football’s most prestigious clubs.

The two clubs are looking to return to past heights this season and their match-up at the Camp Nou could prove decisive in who secures their place in the knockout rounds.

Throughout the years there have been some huge names who have represented both clubs and ahead of their latest meeting we’ve picked out five of the best.

Before a certain Uruguayan with the same name wrote his own chapter into the history books at Barcelona, there was Luis Suarez – the first man to win the Ballon d’Or in the colours of the Catalan club.

Suarez was a star of the side under the great Helenio Herrera, where he won back-to-back La Liga titles. The first of those came as part of a domestic double, before the club’s 1960 title was won alongside the Inter-Cities Fairs Cup.

Suarez’s performances during that campaign saw him win the Ballon d’Or, where he was voted ahead of Ferenc Puskas for the award. He remains the only Spanish-born footballer to have won the accolade.

After six seasons with Barcelona he followed Herrera to Inter Milan, becoming the first £100,000 footballer after a world-record move to the San Siro. He became the first Spaniard to star in Serie A and was a crucial part of Inter’s iconic side of the era, one which won three Serie A titles, two consecutive European Cups and two Intercontinental Cups.

Ronaldo’s emergence remains one of the most exciting tales in modern football history, a footballer who illuminated European football from the instant he arrived.

Before the age of 21 he had twice broken the world transfer record, with both Barcelona and Inter Milan prepared to break the bank for the brilliant Brazilian.

Ronaldo signed for Barcelona in 1996 after a prolific period at PSV Eindhoven and maintained that form during a scintillating spell in Spanish football. He scored 47 goals in just 49 appearances during the 1996/97 season, form which inspired Barcelona to a UEFA Cup Winners’ Cup, Copa del Rey and Spanish Super Cup treble.

Ronaldo was exhilarating in Barcelona colours, with his stunning season including an iconic hat-trick against Valencia and a sensational solo goal after running from inside his own half against SD Compostela.

He ended 1996 as the youngest ever winner of the FIFA World Player of the Year award, but spent just one season at Barcelona as Inter Milan activated his release clause. Ronaldo became just the second player – after Diego Maradona – to break the world transfer record twice and his first season at Inter was arguably the peak of his career.

Up against the world’s finest footballers at that time with Serie A saturated with the game’s best talent, he embarrassed the elite with frightening ease. He scored 34 goals during his debut season and collected a second FIFA World Player of the Year gong, the Ballon d’Or, the Serie A Footballer of the Year award and a UEFA Cup winners’ medal in the process.

Serious knee injuries decimated his latter period at Inter, where Ronaldo scored 59 goals in 99 appearances before a move to Real Madrid. Though never quite the same post-knee troubles, he won a second Ballon d’Or after inspiring Brazil to World Cup success in 2002.

Luis Figo’s departure from Barcelona remains one of the most iconic transfers in football history. Figo was the star turn of the Barcelona side during the late nineties, having signed from Sporting Lisbon before developing into one of world football’s finest at the Camp Nou.

A wonderfully gifted technician, Figo won a Copa del Rey and UEFA Cup Winners’ Cup double in 1996/97, before back-to-back league titles across the following two campaigns. At his best, he was among the best creative talents on the planet and was recognised as such with the Ballon d’Or in 2000 and FIFA World Player of the Year in 2001.

Figo made 249 appearances for Barcelona, before a move that stunned football as he crossed the El Clasico divide to sign for Real Madrid in a world-record deal. The first transfer of the club’s Galactico era, he spent five seasons at the Bernabeu before a move to Inter Milan.

Figo was in the final stages of his career during his time with the Nerazzurri, but became a huge favourite at the San Siro. He made 140 appearances for Inter Milan and won four consecutive league titles during a dominant period for the club.

Zlatan Ibrahimovic’s career has been spent at some of the most prestigious clubs in the game, including spells at both Inter Milan and Barcelona.

Ibrahimovic signed for Inter from Juventus following a mass exodus in the wake of the Calciopoli scandal and produced some of his best football at the San Siro.

The Sweden international finished as the club’s leading scorer during his debut campaign as Inter won the Scudetto with a then-record points total, before a 22-goal campaign saw Ibrahimovic win a second successive title and the Serie A Footballer of the Year award the following season.

⚽️ One of the most feared strikers of his generation…

The forward scored 66 goals in 117 appearances for Inter, before a mega-money move to Barcelona. The deal was worth a reported £59m – plus Samuel Eto’o in exchange – but proved an ill-fated venture to Spanish football.

Ibrahimovic scored 21 goals and won a host of accolades including La Liga and the Club World Cup during his debut season, but personality clashes with Pep Guardiola and Lionel Messi’s move into a central role brought a premature end to his time at the Camp Nou.

In typical Zlatan style, he has since made several digs in Guardiola’s direction post-Barcelona and accused the Spaniard of mismanaging his talents.

“When you buy me, you are buying a Ferrari,” he famously quipped. “If you drive a Ferrari, you put premium petrol in the tank, you hit the motorway and you step on the gas. Guardiola filled up with diesel and took a spin in the countryside. He should have bought a Fiat.”

Samuel Eto’o was the makeweight in Ibrahimovic’s aforementioned move to Barcelona, with Inter Milan coming out firmly on top in a remarkable trade.

Eto’o had been a leading figure at Barcelona having scored 130 goals in 199 appearances in all competitions for the club. A protagonist of the silverware successes under Frank Rijkaard and Pep Guardiola, he scored in the Champions League final wins over Arsenal (2006) and Manchester United (2009).

The Cameroonian was allowed to leave for Inter as part of the Ibrahimovic deal and shone under Jose Mourinho in Milan. His debut campaign saw the Nerazzurri become the first Italian team to win a continental treble, as Eto’o became the fourth player to win consecutive Champions League crowns with different clubs and the first to do so as part of trebles.

He spent three seasons with Inter and scored 53 goals in 102 appearances.