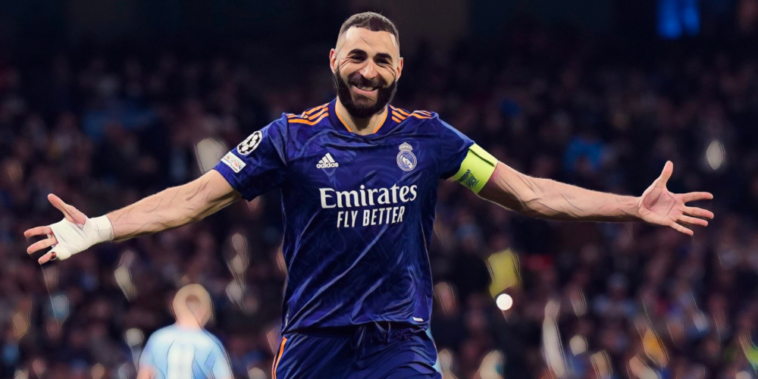 It’s advantage England in the Champions League semi-finals after first leg wins for Manchester City and Liverpool increased the chances of a third all-Premier League final in four seasons.

City edged a thriller with Real Madrid in a chaotic clash at the Etihad, though the spirited Spaniards ensured the tie remains in the balance ahead of the return.

Liverpool earned a more comfortable cushion against Villarreal, but the Reds were made to work for their 2-0 advantage as the stubborn visitors demonstrated the defensive discipline that led to their upset of Bayern Munich in the previous round.

If ever there was an advert for the Champions League’s latter stages, this was it.

Manchester City and Real Madrid produced an all-time classic in a pulsating clash at the Etihad, one which saw the momentum of the game continue to swing across the course of an unforgettable 90 minutes.

Pep Guardiola’s side were no doubt the better side and began in blistering fashion, racing into a two-goal lead inside the opening 11 minutes through Kevin De Bruyne and Gabriel Jesus.

At that stage it appeared the semi-final could be hopelessly one-sided as City overwhelmed their illustrious visitors, but Real Madrid showed fight to come back into the contest.

Each time City threatened to create an unassailable advantage the Spanish side roared back, with the referee’s full-time whistle seeing the game end at 4-3.

Real Madrid might just be the happier of the two teams with that result and if the second leg is even half as good, it will be unmissable viewing at the Bernabeu.

Liverpool’s 2-0 win over Villarreal was an efficient job done at Anfield, securing a healthy advantage ahead of the return in Spain next week.

As Thiago Alcantara orchestrated proceedings and Sadio Mane continued to flourish in his new central role, it was the performance of Luis Diaz that again caught the eye as the winter window addition enhances his reputation on Merseyside.

The 25-year-old appears to have ousted Diogo Jota from the club’s first-choice front three and was electric viewing against Villarreal, offering Liverpool’s most dangerous threat during the opening exchanges.

Diaz has that quintessential South American brilliance with a combination of flair, tenacity and technique and was unfortunate not to score after creating several opportunities.

It’s far from a secret now, but Liverpool have unearthed another gem in the captivating Colombian.

Just where would Real Madrid be without Karim Benzema? Almost certainly staring down the barrel of a Champions League exit.

Benzema’s goals have fired Real Madrid into the semi-finals and have ensured the Spaniards remain in the contest against Manchester City, scoring twice at the Etihad to make it 14 goals in the Champions League this season.

It’s the fifth most prolific season in the competition’s history and his goals were a demonstration of a footballer at the peak of his powers, first guiding a volleyed finish into the bottom corner after City had opened up an early 2-0 lead.

His second was a moment of outrageous audacity as Benzema – who had missed two penalties in the space of just seven minutes against Osasuna last week – produced a perfect Panenka from the spot to score Real Madrid’s third goal of the evening.

Benzema has scored 41 goals in just 41 appearances this season and his ice-cold composure against City leaves Real Madrid in with a chance of turning the tie around.

Manchester City will take a one-goal advantage to Spain next week, though there is little doubt the Premier League champions will be disappointed with that narrow lead.

Guardiola alluded to that disappointment post-match, but praised his team’s performance at the Etihad.

“At the end maybe the chances we create we have to convert. I want to convince my players that we won the game and heads up. We were one up but even two or three or four you have to perform. They have the ability to score three goals in 10 minutes. It is a good test for ourselves.”

City had more possession and more clear-cut opportunities than Real Madrid, with Phil Foden and Riyad Mahrez each coming agonisingly close to extending their advantage further.

Those missed chances – coupled with some slack defending – leave the clash evenly poised but City’s first leg performance should instil confidence that Guardiola’s team remain the side to beat in this season’s competition.

Naby Keita’s improved form and the match-winning balance of Fabinho and Thiago Alcantara has seen Jordan Henderson’s undisputed status questioned in recent weeks, but the Liverpool captain provided a reminder of his importance in the win over Villarreal.

Henderson was left out of the side for both the FA Cup semi-final win over Manchester City and the weekend Merseyside Derby success against Everton, but returned to the starting XI and produced a captain’s performance at Anfield.

Special nights them…Big Job to do next week! pic.twitter.com/VYdVW7hCPm

The trademark tenacity and energy were on show from the England midfielder, whilst it was Henderson who contributed to the breakthrough as his cross was deflected in off Pervis Estupinan.

Henderson’s role has somewhat reduced in recent weeks given the competition and quality in Liverpool’s midfield this season but when the big games come around he remains one of Klopp’s most trusted performers.