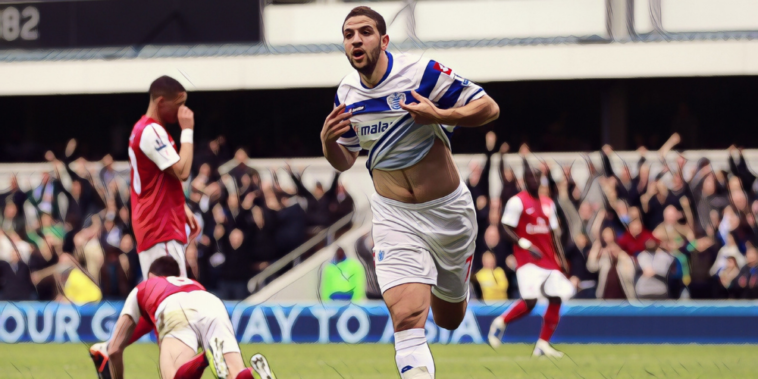 The ‘streets won’t forget’ has become a popular phrase amongst football fans, one coined to refer to talents whose flame flickered all too briefly.

Their short spell as great entertainers of the Premier League was perhaps not enough to leave a truly lasting legacy for decades to come, but for those who witnessed their talents first hand each left memories that evoke true nostalgia.

From mercurial mavericks to ballers who blew hot and cold, we’ve decided to look back at five footballers who enjoyed short but sweet spells in the English top-flight.

Sam Allardyce may have earned his reputation for direct and unattractive football, but he does deserve credit for assembling a cult Bolton side in the early 2000s.

Big Sam’s mix of ageing continental  stars and home-grown grafters saw Bolton reach Europe and ruffle feathers at the top end of the division, with arguably the most memorable marquee arrival that of Jay-Jay Okocha.

It was a shock move and an odd combination, but the free-spirited Nigerian showboater and a manager who took pride in upsetting the established order by any means necessary became an unlikely success story.

"So good they named him twice!" 🇳🇬

Okocha was a revelation during a brief period in Bolton, bamboozling defences with an array of party-pieces not seen before or since his short spell in English football.

From fantastic free-kicks to making Ray Parlour look utterly foolish in a clash with Arsenal, Okocha danced to his own beat and brought a joyous fun-factor to Allardyce’s outfit.

There are few montages of Adel Taarabt’s time in the Premier League that are not accompanied with a ‘the streets won’t forget’ caption, the Moroccan magician one of the division’s most notorious cases of fleeting genius.

Having failed to earn trust at Tottenham, a move to Queens Park Rangers unlocked the best from Taarabt as the west Londoners indulged the maverick magic of the midfielder.

He inspired QPR to promotion with a stunning 2010/11 season in the Championship, before bringing the best of his nonchalant wizardry to the top tier, embarrassing elite defenders with nut-megs, feints and an ability to glide through opposition traffic.

Just take ten minutes and rewatch some of Taarabt’s best moments in a QPR shirt, a footballer whose filthy footwork mocked opposition midfielders and left even some of the best red-faced.

It takes a full package to become a truly top, top player, but in terms of pure natural talent and skill alone, few have matched the tantalising talent of Taarabt.

Finding himself slap-bang in the centre of a Venn diagram depicting Premier League one-season wonders and those remembered fondly on the streets is Michu, the former Swansea striker who went goal-crazy during an unforgettable first season in South Wales.

Michu arrived as a relative unknown from Rayo Vallecano after a prolific season in La Liga, before finding that form once again in English football.

His lethal left foot saw him plunder 18 league goals for Swansea, adding a further four in cup competition as the Welsh side won a first major trophy with the 2013 League Cup.

Throw in a trademark celebration and it’s the perfect potion for a Premier League icon, one who a certain Erling Haaland has credited with being amongst his early inspirations.

To earn eternal acclaim in the streets, a candidate must have given fans glimpses of genius without ever truly fulfilling their vast potential.

Ben Arfa’s career was packed full of questions regarding his attitude and application, but when it all came together for the gifted Frenchman it was quite often exhilarating viewing.

That turn, that run, that finish 🔥

The winger’s finest football came in the colours of Newcastle United, a club that has had its fair share of gifted Gallic stars, from the wonderfully talented David Ginola to the frustrating flashes of Laurent Robert.

Ben Arfa was another who brought fun and flair to St James’ Park, a footballer who could change the game in an instant with a piece of electric individualism.

Stunning solo goals against Blackburn and Bolton were just some of the memorable moments of Ben Arfa’s balletic brilliance.

Dimitri Payet could quite conceivably have been one of the Premier League’s finest footballers and for a short time in the colours of West Ham, he was just that.

Payet was quite literally unplayable during a sensational 2015/16 season for the Hammers, arriving from Marseille and lighting up London with his creative genius.

He scored sensational goals from distance and dribbled his way through opposition defences, adding a series of flicks, tricks and sublime skills to the goals he scored and created.

There was both entertainment and efficiency from the France international, who was shortlisted for the Player of the Season accolade before it all turned sour in East London.

Unsettled during his second season, he departed in the January in acrimonious circumstances after forcing through a return to Marseille and has never again quite recaptured the mesmeric best of his time in Claret and Blue.