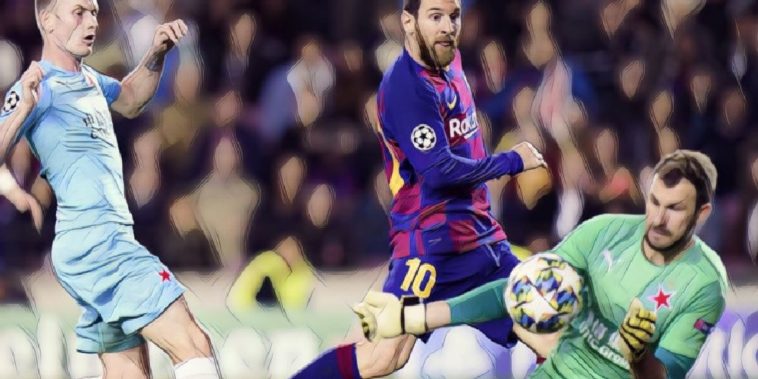 The latest round of Champions League action saw mixed fortunes for the four English sides, with none of the Premier League’s representative clubs yet to secure their passage to the knock-out stages in what has been a fascinating group stage so far.

Across Europe there were big wins for Real Madrid and Valencia, whilst Borussia Dortmund showed great spirit to secure a comeback win and a vital three points in the ‘Group of Death’ – Group F.

Despite spending some €45m on the talented teenager last summer, Real Madrid’s acquisition of Rodrygo went somewhat under the radar following their significant investment on the likes of Eden Hazard and Luka Jovic.

The 18-year-old has already scored twice in four La Liga appearances for the club, but the player labelled as ‘the new Neymar’ announced himself to world football with a Champions League hat-trick on Wednesday night.

He would later provide an assist for Karim Benzema before completing a ‘perfect’ hat-trick in stoppage-time, poking home a right-footed finish to become the second-youngest hat-trick scorer in the competition’s history after former Real legend Raul.

The Czech Republic minnows must have cursed their luck when the draw for the group stage was made in August, being pitted alongside three former winners of the tournament in Barcelona, Inter Milan and Borussia Dortmund in what many viewed as the ‘Group of Death’.

A spirited 1-1 draw with Inter in the San Siro on Matchday one proved Slavia could compete, though they produced one of their best-ever European performances to secure a goalless draw at Barcelona in midweek.

Heading to one of the most formidable stadiums in European football, Slavia battled valiantly in Catalonia on Tuesday night, with goalkeeper Ondrej Kolar amongst their stand-out performers.

The shot-stopper dealt with everything thrown his way by the likes of Lionel Messi and Antoine Griezmann, helping to secure a memorable point for his side.

It’s been a difficult week for the popular Tottenham forward, who was left visibly distressed following his involvement in the horrific ankle injury suffered by Everton‘s Andre Gomes at Goodison Park last weekend.

The South Korea international was deemed mentally ready to play by Spurs boss Mauricio Pochettino on Wednesday night, and delivered a fine performance which moved the club a huge step closer towards the knock-out stages.

Son would inadvertently assist the opener for summer signing Giovani Lo Celso at Red Star Belgrade, before taking the game away from the Serbian outfit with a second-half brace.

The 27-year-old lashed home from Dele Alli’s pass before tapping in a Danny Rose cross, Christian Eriksen sealing an impressive 4-0 victory for Tottenham in Belgrade.

Son would make an apology to Gomes down the camera following his opening goal, the forward still clearly impacted by the distressing scenes last weekend.

A classy touch from a classy player.

The Borussia Dortmund loanee is enjoying himself in the Champions League this season, with the flying full-back taking his tally to four goals in four games after scoring his second brace of the group stage in Dortmund’s fightback win over Inter Milan.

The Morocco international got himself forward in typical style during a thrilling encounter, as Dortmund came back from two goals down at half-time to secure a precious home win.

Hakimi ghosted into the box to tap home Dortmund’s first, before hitting a fine winner following Jadon Sancho’s pass after Julian Brandt had got the Bundesliga side level.

Hakimi only turned 21 earlier this week and already looks like an elite attacking threat from full-back, and parent club Real Madrid are sure to be monitoring his progress closely has he continues to flourish on Europe’s biggest stage.

Having become somewhat of a scapegoat last season for the club’s poor performances, Jorginho has been transformed under the management of Frank Lampard this season and has emerged as arguably Chelsea’s key player.

The Italy international has been at the heart of the club’s best displays this season and was a calm head in a frantic encounter with Ajax on Tuesday night, coolly slotting home two penalties as Chelsea fought back from three goals down to secure a draw in a breathless encounter at Stamford Bridge.

The 4-4 draw leaves Group H wide open, with Chelsea and Ajax now joined on seven points by Valencia in a three-way fight to secure qualification.