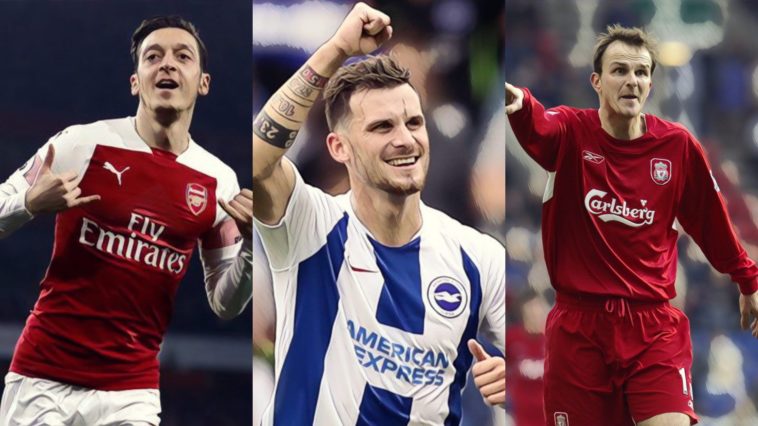 In the Premier League’s 29-year history German players have not necessarily been the most prominent imports, but many have made their mark on the English top-flight.

From Jurgen Klinsmann and Robert Huth to Michael Ballack and Jens Lehmann, Germany has provided many talented and famous footballers to these shores who beloved figures for their respective fanbases.

The European country continues to make an impact on the division, particularly with two high profile Germans in charge of Big Six clubs, but on the pitch too, where we recently saw a new entrant into the top five German assist makers of the Premier League era.

A mainstay in the Brighton side since the club earned promotion four years ago, Pascal Groß is the team’s top assist provider over that period.

The midfielder provided the final pass for Leandro Trossard’s winner against Tottenham Hotspur recently, his 18th assist in the Premier League. That took him above Thomas Hitzlsperger’s 17 in the list of German assist makers since 1992.

Despite starting out as a goalkeeper, Christian Ziege went on to become a highly-rated full-back in the mid-nineties for Bayern Munich before joining AC Milan in 1997.

Having played for such giants in his career it was only natural that he follow the footsteps of Fabrizio Ravanelli by leaving Serie A for Middlesbrough. In his one and only season there he returned a creditable six goals and six assists, which was enough to convince Liverpool to buy him.

Once again, Ziege only remained for one campaign, but he did play a part in the Reds’ treble-winning campaign, coming off the bench in extra-time of the 2001 League Cup final. He was left out of the matchday squads for the FA Cup and Uefa Cup finals, however.

The German subsequently joined Tottenham, where he made nine assists over three seasons. He left Spurs in 2004 to join Borussia Mönchengladbach for the final season of his career.

In 1998 Dietmar Hamann left Bayern Munich as a two-time Bundesliga champion and winner of the Uefa Cup to join Newcastle United, but he arrived just as the Magpies were hitting a slump.

After a 13th-placed finish in his only season in the North East, Hamann joined Liverpool, where he spent eight brilliant years at Anfield. The German was more of a hard-working midfielder than a creative outlet, but he did make 20 assists in 191 league appearances for the Reds.

Hamann would win a host of trophies for Liverpool, including the Uefa Champions League in 2005, before playing out his final few seasons in the Premier League at Manchester City.

One of the most exciting German footballers to ever grace the Premier League, Leroy Sané won two Premier League titles and was crowned the PFA Young Player of the Year during his four-year stint at Manchester City.

There is a credible argument to be made for him being the best German player to ever grace the English top-flight. It’s just a shame he was injured for the final year of his time at City before returning to the Bundesliga.

Any argument about the Premier League’s greatest German footballer, though, is almost certainly lost before it’s begun to Mesut Özil. The former Real Madrid supremo doesn’t only have the most assists of any German in the league’s history, but he has also scored the most goals with 33 strikes.

The playmaker recently left Arsenal to join Fenerbahce after seven years with the North London outfit, and while he became a divisive figure in his final few years there, he was a mesmeric talent who provided moments of wonderment for the Gunners faithful.

Özil came so close to equalling the Premier League assist record in 2015/16, but fell one short with 19 for the campaign. He leaves Arsenal having played a role in four FA Cup wins, although he was left out of the matchday squad for the 2020 final.

Read: Edinson Cavani, the luckiest signing of the season, has been an ideal fit for Man United