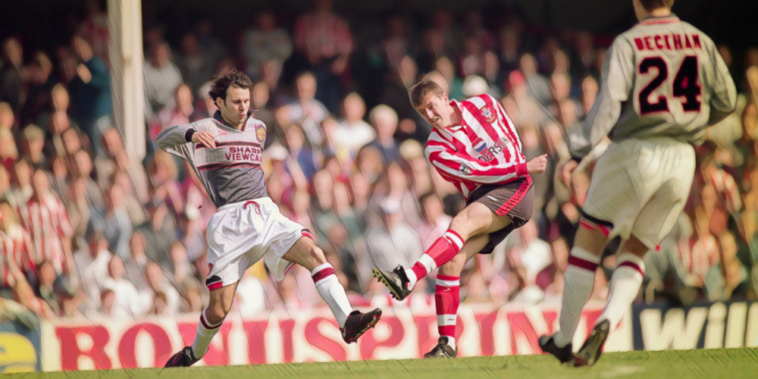 Today marks the 26-year anniversary of one of the Premier League’s greatest ever excuses, as Manchester United manager Sir Alex Ferguson blamed his side’s grey kit for a poor performance at Southampton.

United were largely an unstoppable force during the nineties as the Red Devils dominated the first two decades of the Premier League era, though found themselves on the wrong side of a thumping by the Saints in April 1996.

Ferguson memorably made his team change shirts at half-time after complaining of poor vision between his players, but the change of kit made little difference as United fell to a disappointing defeat.

On the anniversary of the grey shirt fiasco at Southampton, we look back at some of the Premier League’s most notorious excuses of all time.

Manchester United had won two of the first three editions of the rebranded Premier League in the early nineties and were heading rapidly towards a third crown in four seasons in 1995/96.

Sir Alex Ferguson’s side travelled to face Southampton at The Dell during the run-in, a fixture that would live long in the memory given the excuses offered up by the visiting manager.

United were in fine form after winning 11 of their previous 12 games to overhaul Newcastle’s huge lead at the top, but found themselves 3-0 down to the Saints as goals from Ken Monkou, Neil Shipperley and Matt Le Tissier put the hosts in control at the break.

Unable to accept the drop in standards from his side, Ferguson took his fury out on the club’s grey kit, insisting the colour made it difficult for his players to pick each other out when blended into the crowd.

United had lost previous clashes at Aston Villa, Arsenal and Liverpool in the grey colours and their dismal first-half showing proved the final straw, returning for the second half in blue and white kit.

Ryan Giggs’ goal ensured the Red Devils ‘won the second half’ after the final score finished 3-1, with the controversial grey kit later consigned to the bin and a place in Premier League folklore.

Video games became huge business in the eighties and nineties, with even the Premier League’s finest footballers hooked on the popular pastime.

Liverpool goalkeeper David James offered up the interesting excuse of his extra-curricular activities impacting his form, revealing an addiction to video games such as Tekken and Tomb Raider were affecting his concentration levels.

The goalkeeper was handed the unwanted moniker of ‘Calamity James’ during his time on Merseyside, with supporters critical of his performances after a series of goalkeeping gaffes.

After shipping three goals in a defeat to Newcastle in 1997, James blamed his latest poor performance on spending too much time in front of the screen with an animated Lara Croft.

Sir Alex Ferguson again with another fantastic excuse, though this time offered up to the court of law and not just the football media.

The former Manchester United gaffer was caught driving illegally down the hard shoulder in 1999, his reasoning being a rumbling in his lower half.

Fergie blamed his actions were because of a case of diarrhoea, the Scot insisting a bout of the runs was behind his driving decision as he desperately sought to avoid being caught short.

There’s been a fair share of quite bonkers Premier League owners, but former Fulham man Mohamed Al-Fayed was as crazy as they come.

Most sides tend to pay tribute to past heroes with statues outside of their stadium, but in 2009 Al-Fayed decided there was a more deserving man to honour than Fulham’s former favourites.

Al-Fayed bizarrely erected a statue of Michael Jackson following the King of Pop’s death, memorably telling fans they could ‘go to hell’ if they didn’t like his tribute to the moonwalking megastar.

Such was the regard that Al-Fayed held the statue, he later blamed its removal for Fulham’s relegation after selling the west Londoners to Jacksonville Jaguars owner Shahid Khan.

Crystal Palace’s Wayne Hennessy found himself in hot water in 2019, the goalkeeper pictured making an offensive gesture which resembled a Nazi salute. What made the situation all the more alarming was that the picture came to light after being posted on Instagram by Hennessy’s Palace teammate, Max Meyer, who happens to be German.

Hennessy, of course, pleaded ignorance and conveniently said he had no idea what a Nazi salute even was, suggesting the snap was an ill-timed moment as he ‘waved and shouted at the person taking the picture to get on with it’.

Speaking on Twitter, he said of the incident:  “I waved and shouted at the person taking the picture to get on with it and at the same time put my hand over my mouth to make the sound carry.

“It’s been brought to my attention that frozen in a moment by the camera this looks like I am making a completely inappropriate type of salute. I can assure everyone I would never ever do that.”

Crystal Palace keeper Wayne Hennessey has denied making a Nazi salute during a meal with his team-mates.https://t.co/1j94I6MkCM pic.twitter.com/qlDJaX5ylV

Hennessey escaped without punishment by the Football Association after the charges were oddly found not proven.