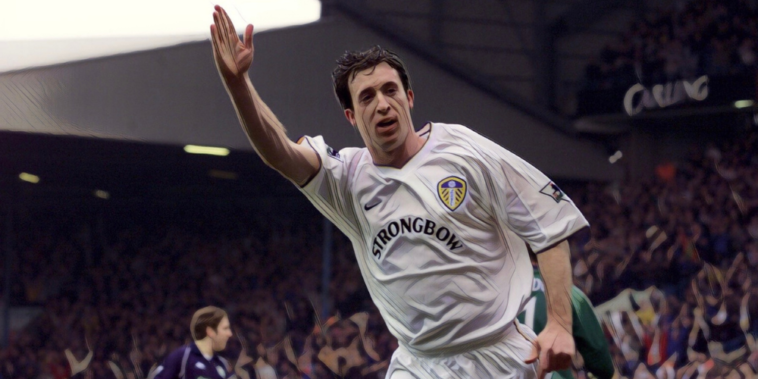 Manchester City host Leeds in the Premier League this weekend, the league leaders looking to edge closer to the title against a side who have won plenty of admirers since their return to the top flight.

The two sides have enjoyed vastly contrasting fortunes over the past decade with the former establishing themselves as England’s dominant force, whilst Leeds’ promotion last season saw the club return to the Premier League after a 16-year absence.

The first meeting between the two teams proved an enthralling encounter as Pep Guardiola went head-to-head with mentor Marcelo Bielsa, and supporters will be hoping for another exciting clash at the Etihad on Saturday lunchtime.

Ahead of the clash, we look at five of the best players to play for both Manchester City and Leeds.

Darren Huckerby’s impressive performances at Coventry saw big-spending Leeds splash £6m on his services in 1999, the exciting forward joining a side looking to compete with England’s elite.

Leeds were enjoying a fine period across the turn of the millennium after making an impression both at home and abroad, with Huckerby struggling to secure regular minutes in a squad containing talents such as Harry Kewell, Mark Viduka and Alan Smith.

Huckerby made 40 league appearances across two seasons but scored just twice, admitting he felt like a ‘bit-part’ player at Elland Road despite the excitement that greeted his arrival at the club.

He signed for Manchester City mid-way through the 2000/01 season but was unable to prevent relegation from the Premier League, before playing an influential role as the club bounced back at the first attempt under Kevin Keegan.

Huckerby became a huge fans’ favourite and scored 26 goals in all competitions during that promotion-winning season, his explosive pace and dribbling ability exciting fans as he formed a fine partnership with Shaun Goater in attack.

He departed the following season for Nottingham Forest however, having seen his playing time reduced following the arrivals of Nicolas Anelka and Jon Macken.

Mills was another player who featured for Leeds during a successful period in the early 2000s, signing from Charlton in a £4.1m deal and forming part of the side which reached the Champions League semi-finals in 2000/01.

Mills spent four seasons at Elland Road and made 141 appearances in all competitions, his performances seeing him become a regular with England, featuring as the Three Lions’ first-choice right-back during the 2002 World Cup in Japan and South Korea.

The financial collapse that contributed towards Leeds’ fall from grace saw the defender moved on, spending the 2003/04 season on loan with Middlesborough before joining Manchester City following Leeds’ relegation from the Premier League.

He featured regularly during his first season before falling out of favour following the arrival of Stuart Pearce as manager, later spending time on loan with Hull, Charlton and Derby before announcing his retirement in 2008.

Robbie Fowler’s repertoire of finishing made him one of the Premier League’s finest forwards during the nineties, bursting onto the scene with Liverpool as one of the division’s most exciting teenage talents.

Fowler scored 171 goals in 330 appearances during his first spell with the Reds, but competition for places from Michael Owen and Emile Heskey saw him sign for Leeds in an £11m deal in 2001.

He spent two seasons with the club and scored 14 times in 33 appearances, forming part of an exciting attacking compliment alongside Mark Viduka, Robbie Keane and Harry Kewell.

Leeds’ financial difficulties saw him depart in a cut-price deal to Manchester City however, arriving at Maine Road for a fee of £7m, but he struggled for form and fitness for much of his time with the club.

He scored 28 goals in 92 appearances before making a romantic return to Liverpool on a free transfer in 2006.

James Milner rose to prominence after becoming the youngest goalscorer in Premier League history at Leeds, making his mark as a fresh-faced 16-year-old after coming through the club’s academy ranks.

He spent time on loan with Swindon before becoming a regular, making 32 appearances in all competitions as the club were relegated from the Premier League in 2003/04.

Leeds’ drop into the second tier saw their highly-rated academy graduate move on to Newcastle, before winning the PFA Young Player of the Year accolade whilst at Aston Villa.

Milner’s impressive performances at Villa Park earned him a £26m move to Manchester City, where he formed part of the club’s emerging side following the takeover from Sheik Mansour.

Milner won two Premier League titles amongst four major honours at the Etihad, making 203 appearances in all competitions before leaving for Liverpool on a free transfer.

He has since added further winners’ medals in the Champions League and Premier League on Merseyside, whilst he ranks fifth for all-time appearances in the Premier League.

Another product of the academy system at Leeds, Delph emerged as a first-team prospect following Leeds’ drop into the third tier of English football, featuring regularly in the side to earn admiring glances from the Premier League.

The midfielder broke into the team during the 2008/09 season and was signed by Aston Villa at the end of the campaign, securing the teenager in a deal worth £6m.

Delph spent six seasons with Villa and broke into the England side during his time with the club, being named club captain before a controversial exit to Manchester City.

Delph initially confirmed he would be remaining with Villa despite interest from the Etihad, only to reverse his decision and sign for City after they activated an £8m release clause in his contract.

It proved a move that paid dividends for the midfielder as he won back-to-back league titles under Pep Guardiola, proving a valuable member of the squad with his ability to play both in midfield and at full-back.

He made 89 appearances for City across all competitions before signing for Everton in 2019.