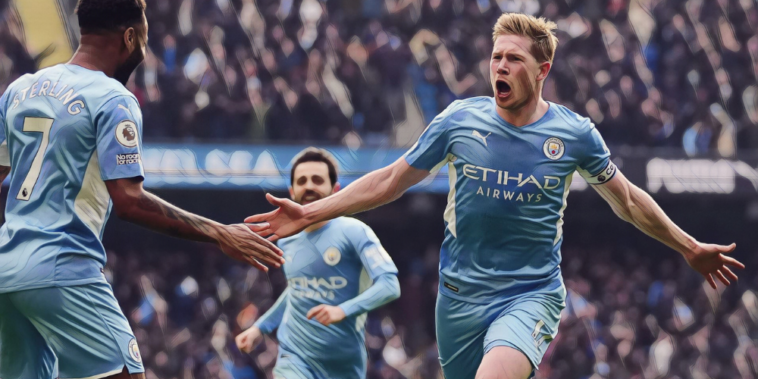 Raheem Sterling is on the verge of completing a move to Chelsea, with the winger set to sign a long-term deal at Stamford Bridge.

Sterling expressed a desire to leave Manchester City this summer in search of greater prominence and the Premier League champions have accepted his request and an offer from a direct rival.

Following billionaire investment, the clubs have become two of the most dominant in English football in recent seasons. However, there have been several players who have adorned the blue shirts of both clubs.

We’ve decided to look back at some of those stars, here are five of the best players to play for Manchester City and Chelsea in the Premier League era.

A huge fans’ favourite at Manchester City, Wright-Phillips emerged from the club’s academy ranks and established himself as one of the most exciting young wingers in the Premier League.

Following his breakthrough as a teenager, he was named as the club’s Young Player of the Year four consecutive campaigns, performances which attracted the attention of a recently-rich Chelsea side who signed him in a £21m deal in 2005.

Despite winning the Premier League and FA Cup, the move to Chelsea saw his career stall as he failed to establish himself as a regular first-choice. He was a notable omission from the matchday squad for the 2008 Champions League final.

Once a Blue, always a Blue 💙

After three seasons in west London he returned to Manchester City in a cut-price deal, scoring twice on his second debut.

He featured regularly across the next two campaigns before falling out of favour, departing for Queens Park Rangers in 2011 having made 275 appearances over two spells with the club.

The greatest player in Chelsea’s history? Certainly a contender.

Chelsea secured the signing of Frank Lampard from London rivals West Ham in 2001, with the midfielder becoming one of the best players in Premier League history after crossing the capital.

He moved to MLS side New York City following his departure from the Premier League, only to return on loan at sister club Manchester City, a move which was criticised by sections of the Chelsea support.

His sole season in Manchester delivered eight goals in 38 appearances, his first famously coming against former club Chelsea at the Etihad.

The nomadic forward enjoyed spells at six different English clubs throughout his career, taking in spells at both Manchester City and Chelsea.

Anelka signed for Manchester City after a brief loan spell at Liverpool, with The Citizens benefitting from the Reds’ reluctance to sign the forward on a permanent basis.

Anelka scored 45 goals in 103 appearances across two-and-a-half seasons at the club, form which helped the club reestablish themselves as a top-flight side after promotion to the Premier League.

Having left for Fenerbahce he signed for Chelsea in 2008, via a spell at Bolton, where he formed a strong partnership with Didier Drogba at Stamford Bridge and won a host of silverware.

The Frenchman would go on to win the Golden Boot and the #PL title with the club pic.twitter.com/8yRHYTKytM

During perhaps the most settled period of his career in west London, he scored 59 goals in all competitions.

Sturridge came through the academy ranks at Manchester City, but made just 21 league appearances for the club before opting to join Chelsea following the expiry of his contract.

Despite City beginning to heavily invest under their new regime, Sturridge decided the move to London would be the best for his development and he spent three-and-a-half years at Stamford Bridge.

In that time the forward won a host of accolades including the Premier League, two FA Cups and the Champions League, though he would be unable to dislodge the likes of Fernando Torres and Didier Drogba to become an automatic first-choice.

The England international scored 24 goals in 96 appearances for Chelsea, before joining Liverpool in a £12m deal in January 2013.

Chelsea’s decision to allow Kevin De Bruyne to leave the club must still rankle with the club’s hierarchy.

Having plucked the talented young midfielder from Belgian football, the club saw De Bruyne develop on loan in Germany before bringing him back into their squad ahead of the 2013/14 season.

Despite beginning the campaign in the side under Jose Mourinho, De Bruyne soon fell out-of-favour with the Chelsea boss and after just three league appearances was once again sent on loan.

He moved on permanently to sign for Wolfsburg, where he established himself as one of the Bundesliga’s finest players before returning to the Premier League in a then-club record deal at Manchester City.

His return to England has seen him go from strength to strength, flourishing into one of the finest midfield talents in world football in Pep Guardiola’s all-conquering side.

Part of the City team that earned a league record 100 points in 2017/18, he helped the club to English football’s first ever domestic treble the following season.

No player has ever reached 50 Premier League assists quicker than the brilliant Belgian, who equalled the single season record after creating 20 goals during the 2019/20 campaign. Winner of the club’s Player of the Season accolade on a joint-record four occasions, he also won back-to-back PFA Player of the Year awards in 2020 and 2021.

Watching on as De Bruyne has become a Premier League great, Chelsea must still regret their decision to allow his exit.