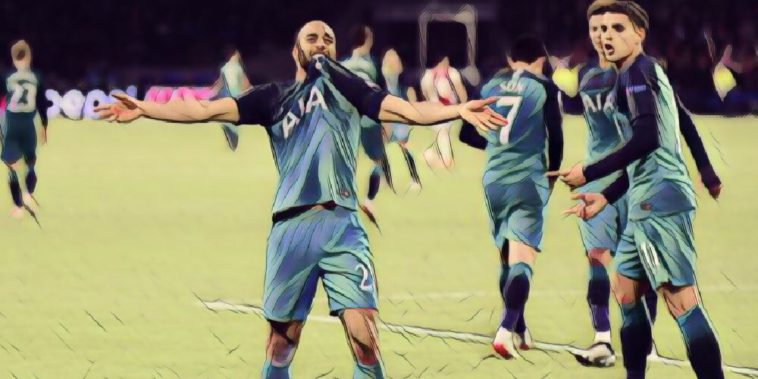 Tottenham head to RB Leipzig in the Champions League this evening looking to overturn a 1-0 first leg deficit, the north London side facing a difficult task as they bid to advance to the quarter-finals.

Injury-hit and out-of-form, Jose Mourinho’s side will need to produce a big performance away to the Bundesliga title challengers, though the club can take heart from some memorable Champions League displays in recent years.

Tottenham‘s first venture into the Champions League saw the club drawn against holders Inter Milan at the group stage, the two sides contesting a pair of memorable battles that will be forever remembered for the sensational performances of Gareth Bale.

Harry Redknapp’s 10-man side had suffered a chastening first half in the first fixture at the San Siro, goalkeeper Heurelho Gomes sent off after just eight minutes as Inter raced into a four-goal lead at the interval.

The second half would belong to Bale, however, who hit a stunning hat-trick in a breakthrough performance on Europe’s biggest stage to raise confidence amongst the Spurs players ahead of the return fixture despite defeat.

Heading to White Hart Lane, it would be Inter who would suffer a nightmare evening, Bale once again the architect as goals from Rafael Van der Vaart, Peter Crouch and substitute Roman Pavlyuchenko secured a famous victory.

Bale was the star of the show, running Inter full-back Maicon ragged once more with a display of devastating pace and end product, the result moving Spurs a step closer to qualification for the last 16.

After securing their place in the Champions League knock-out stages during that maiden campaign, Spurs were handed another trip to Milan to face Inter’s city rivals AC, the seven-time European champions.

Whilst Milan were not quite the force of old they still possessed a formidable line-up including the likes of Zlatan Ibrahimovic, Alessandro Nesta and Thiago Silva, but it would be Spurs who would take the advantage following a hard-fought victory at the San Siro.

Heurelho Gomes had kept the north London side in the contest with two superb saves to deny Mario Yepes, providing the platform for Peter Crouch to score a late winner, the forward turning home after a brilliant run from Aaron Lennon on the counter-attack.

Spurs would advance to the knock-out stages for the first time under Mauricio Pochettino courtesy of a famous European night at their temporary Wembley home during the 2017/18 season.

Record winners and holders Real Madrid were the visitors to the capital, but an outstanding display of energy and quality saw off their illustrious opponents, Dele Alli scoring twice at the national stadium.

The midfielder opened the scoring by turning home Kieran Tripper’s cross from close range, before his deflected effort put Spurs firmly in control. Christian Eriksen added a third goal on the counter-attack from Harry Kane’s pass, Cristiano Ronaldo’s response for Real little more than a consolation.

2018/19 would see Spurs advance to the final of Europe’s premier competition for the first time in their history, their a memorable run including a classic all-English tie against Manchester City in the quarter-finals.

In a feverish atmosphere at the club’s new stadium, Pochettino’s side would survive the conceding of an early penalty before securing victory, Hugo Lloris denying Sergio Aguero from the spot after Danny Rose had handled inside the penalty area.

The hosts were the better side throughout the contest and earned a deserved breakthrough late on, the tireless Son Heung-Min twisting on the byline to keep the ball alive before firing low past Ederson to hand Spurs a first-leg advantage.

It would be the return fixture that would see this clash remembered fondly, however, Spurs losing 4-3 on the night only to progress on away goals.

An end-to-end thriller at the Etihad would see four goals exchanged during a breathless first 11 minutes before Raheem Sterling and Sergio Aguero put City ahead on aggregate, only for Fernando Llorente’s bundled effort to seal Spurs’ place in the last four.

The greatest night in Tottenham’s Champions League history came at the semi-final stage of last season’s tournament, an improbable comeback against all the odds to overcome Ajax and advance to the final.

Pochettino’s side had lost a tight first leg 1-0 on home soil, before finding themselves two goals down at half-time in Amsterdam as Matthijs de Ligt and Hakim Ziyech put Ajax on the verge of a first final since the 90’s.

Spurs, despite the absence of injured talisman Harry Kane, remarkably refused to give up and their fighting spirit led to one of the most memorable European evenings in recent memory.

Lucas Moura was the hero for the north London side, scoring a second-half hat-trick including a 96th minute winner, sparking the wildest of celebrations from the visitors as the Johan Cruyff Arena as the shellshocked hosts collapsed around them in despair.

Pochettino shed tears of joy as he celebrated with his players on the pitch, Spurs booking their place in an all-English final against Liverpool in Madrid.

QUIZ – Can you name every Champions League winner?