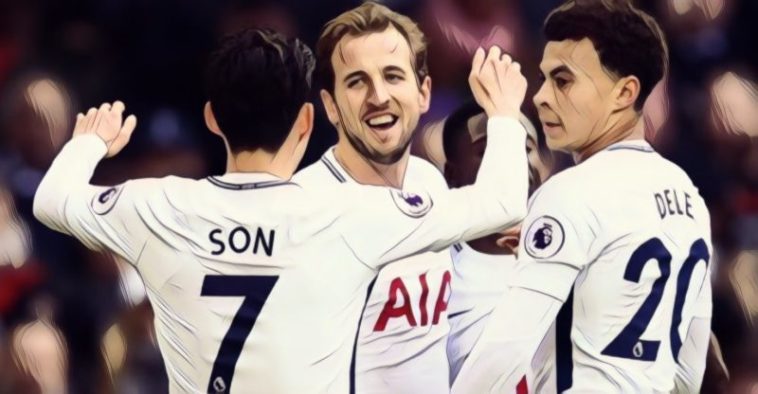 Dele Alli scored his 50th Premier League goal this weekend with a penalty during Tottenham’s 1-1 draw at Burnley, the midfielder joining an exclusive group of players to have reached a half century of top-flight goals for the north London side during the Premier League era.

Following Alli’s achievement we’ve decided to look back through the archives at each player to reach the landmark, here is every player to score 50+ Premier League goals for Spurs:

The latest inductee to this select group of Spurs stars, Alli’s confident penalty at Turf Moor took the midfielder to 50 Premier League goals since his move from MK Dons five years ago.

Alli would make an instant impact upon his arrival in north London, being named as the PFA Young Player of the Year in each of his first two full seasons at the club, the latter of those campaigns seeing him score a career-best of 18 Premier League goals.

Fitness and form have hampered his progress since that campaign and he has failed to register double figures since, though his tally of 50 Premier League goals in just 153 appearances is a fine total for a midfielder still a month shy of his 24th birthday.

South Korean international Son reached the 50-goal landmark just a month earlier than teammate Alli, firing home a double against Aston Villa in February to bring up a half century of Premier League goals.

Son has developed into one of the club’s most important players since signing from Bayer Leverkusen in 2015, operating in a variety of roles across the forward line and combining relentless industry with a clinical goalscoring edge.

After a season of adaptation during his debut campaign in English football, the forward has hit double figures for Premier League goals in each of the past three seasons, scoring an impressive 51 goals in 151 top-flight appearances.

The third Tottenham player to bring up a half century of Premier League goals earlier this season, Eriksen subsequently departed during the January transfer window to take up a new challenge at Inter Milan.

The Danish international had enjoyed a successful six-and-a-half-year spell in the Premier League, developing a reputation as one of the finest playmakers in the division whilst also providing a goal threat of his own.

Eriksen would become the highest-scoring Danish player in the division’s history, and scored his first goal for the club with a free-kick against West Bromwich Albion on Boxing Day 2013.

He would provide a further 50 goals throughout his Premier League career – his final effort in a Spurs shirt coming against Norwich in December of last year, coincidentally also from a free-kick.

A regular source of goals for Tottenham over two separate spells in north London, Defoe scored prolifically over a lengthy Premier League career and currently sits as the eighth all-time top scorer in the division’s history.

The forward would head to Spurs in a controversial move following rivals West Ham’s relegation to the second tier, scoring on his debut against Portsmouth and finding the net seven times in his first 15 Premier League appearances for the club.

A real penalty box predator, Defoe continued to fire over the next four seasons despite competition in attack, before heading to Portsmouth in search of regular minutes. He returned, however, just a year later, enjoying the best period of his career including a best-ever haul of 18 Premier League goals in 2009/10.

He would leave Spurs for a second time in 2014 having scored 91 top-flight goals for the club and as the sixth-highest goalscorer in the club’s history.

Keane arrived at Tottenham following the financial meltdown at Leeds, quickly becoming a popular figure at White Hart Lane with his penchant for the spectacular and signature cartwheel celebration.

The Dublin-born star would score double figures for league goals in six successive seasons before a disappointing six-month spell at Liverpool, returning to north London and adding a further 11 Premier League goals to his tally

The only Irish player to reach a century of Premier League goals over spells at several clubs, Keane would leave Tottenham having scored 91 league goals in 238 appearances.

The first winner of the Premier League’s Golden Boot award, Sheringham would score 21 goals for Spurs during the division’s inaugural season as part of haul of 97 top-flight goals in Tottenham colours.

Sheringham would become a huge fans’ favourite and developed a brilliant partnership with Jurgen Klinsman during the mid-nineties, but would leave in search of silverware having failed to win a major trophy despite scoring 75 league goals in 166 appearances.

Following a trophy-laden spell at Manchester United that delivered a treble and Player of the Year double, he returned for a second spell at Spurs aged 34-years-old, remarkably adding a further 22 Premier League goals to his tally.

Sheringham would play on past his 40th birthday at various clubs after leaving Spurs for a second time in 2003, the former England international holding the records for oldest outfield player and oldest ever Premier League goalscorer.

Tottenham’s current goalscoring phenomenon and one of the finest forwards in the Premier League, Kane has racked up the goals at a relentless rate since his emergence from the club’s academy ranks.

The England captain has been hampered by injuries in each of the past two seasons but has continued to score when at full fitness, his current tally standing at a hugely impressive 136 Premier League goals in just 198 appearances.

Only Manchester City’s Sergio Aguero can better his goals-per-game ratio of players to have scored over a century of top flight goals in the Premier League era, whilst he is now also Spurs’ third all-time record goalscorer behind only Bobby Smith and the legendary Jimmy Greaves.