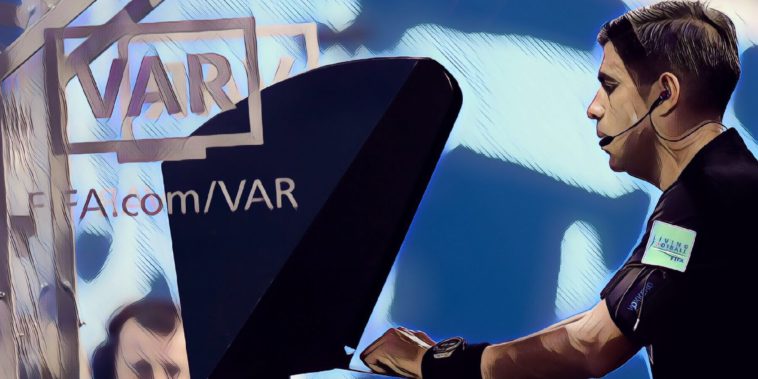 The intricate video replay system known as VAR (Video Assistant Referee) has been the talk of this summer’s World Cup. It has already earned its spurs, having been used to good effect on several occasions, ensuring that justice was done.

However, there can still be no accounting for the human element of the game, and the errors it will inevitably produce.

Already, five moments have stood out as prominent examples of what VAR can do – though the referees have not always acted as the laws of the game would bid them.

The Three Lions conducted themselves extremely well throughout the tournament, and those that click here can see that their penchant for sportsmanlike conduct is not without reward. Though second-favourites to lift the World Cup ahead of their semi final with Croatia, it could have been very different if poetic justice had not been done upon England’s less enlightened opponents.

During England’s opener with Tunisia, there were several incidents of wrestling in the box, in which Tunisia players deliberately targeted Harry Kane. There was also one example of a rabbit punch being thrown to Kane’s neck during the Panama game – the type which saw a player concussed and temporarily paralysed during the infamous ‘Battle of Santiago’ in 1962.

However, the antics of the England’s group stage opponents paled in comparison to the Colombia side that awaited the Three Lions in the last 16. Throughout a gruelling 120 minutes, the Colombians contrived to wrestle, kick and butt England players at will. There are too many incidents to list, but Wilmar Barrios’ should undoubtedly have walked for a ‘Zidane-lite’ headbutt to the chest of Jordan Henderson during a set piece. Barrios then followed through with an upward heabutt to Henderson’s chin.

Players have walked for much less in the past, but on appeal, Barrios escaped with a yellow card. As it transpired, justice was done, with England winning a penalty shootout at a major tournament for the first time since 1996. Next time they face such a vicious opponent, if they ever do, the Three Lions may not be so fortunate.

After a tough but victorious opener against Peru, a Denmark side that had proven highly resilient in defence went into a clash with Australia as favourites. As expected, the Euro 1992 winners went 1-0 up at an early stage, and appeared on-course for victory. Then came a classic sucker punch, as Matthew Leckie rose to head a ball, only to head it against the arm of Yussuf Poulsen.

Antonio Mateu Lahoz reviewed the footage and gave the spot kick. Australia equalised, and held on to the point for dear life. Ultimately, it was a soft call from the referee, although some Australians see it as justice for a VAR-awarded penalty conceded to France on the opening matchday.

The decision ultimately had little bearing where the identity of the progressing teams was concerned. From a Danish perspective, however, being divested of two points in cheap circumstances made the task of finishing top of the group slightly harder. A match against an off-colour Argentina, rather than a commanding Croatia one, may have seen the Danes progress further than the last 16 for the first time in twenty years.

After a mediocre performance against Switzerland, in which Philippe Coutinho’s wonder strike was not enough to get all three points, the Selecao’s second matchday was shaping up to yield an even worse result.

Unlike in the draw against Switzerland, Brazil had dominated proceedings against Costa Rica from start to finish. However, Costa Rican goalkeeper and three-time Champions League winner Keylor Navas was in inspired form.

Navas marshalled a crumbling backline effectively, but with the game heading for a 0-0 draw, Neymar tumbled inside the area under the slightest contact. Referee Björn Kuipers swallowed it hook, line and sinker, pointing to the penalty spot without hesitation. Upon appeal, and a VAR review, the decision was reversed.

The reversal mattered little in the long run. Brazil would go on to win 2-0 with a late flurry of stoppage time goals, and send the Costa Ricans home. Regardless, VAR can only strangle the increasing incidence of players going down in the box under the slightest touch.

After opening with a scintillating hat-trick, Cristiano Ronaldo threatened to become the same colossus that he was in Euro 2016, when Portugal swept to silverware at long last. Yet, as proven by his antics during Portugal’s frustrating draw with a spirited Iran side, behind the wink and boyish charm lies a man with the potential to play dirty.

Frustration coursing through him, after a penalty miss that ultimately cost his side top spot in Group B, Ronaldo became involved in a footrace with Morteza Pouraliganji. With the Iranian showing some excellent hold-up play, Ronaldo recklessly flung an arm in the direction of his opponent’s head. Down went Pouraliganji, and Ronaldo was booked after a VAR review.

Whether it was leniency or indecisiveness from referee Enrique Cáceres, the yellow card issued was seen as a cop out. In accordance with the laws of the game, the referee should have deemed the contact accidental (no booking) or deliberate (red card), although reckless is perhaps the best way to describe Ronaldo’s actions here.

Would a lesser player have walked? Alas, the world will never know.

VAR really came of age in this game. In the dying seconds, the European champions were 1-0 up and on the verge of sealing top spot, and avoiding the Uruguay team that went on to eliminate them in the last 16. The Iranians had their own agenda, chasing an unlikely equaliser in the dying seconds, in the vain hope that it could spur them on to the quickest turnaround World Cup win in living memory.

Sardar Azmoun, considered by many as Iran’s star player before the tournament, received a deep cross which he headed into the arm of Portuguese defender Cedric. Amidst cries for a penalty that had initially been turned down, a VAR review took place. Cáceres made his second controversial decision of the night and awarded Iran what transpired to be an equalising penalty. Luckily, there was insufficient time for the Iranians to build on that slice of extreme fortune.

Cáceres will not remember this game with great fondness. This was a poor interpretation of ‘deliberate handball’. Some purists will take a hard-line approach and defend the referee, but until the physical characteristics of a deliberate handling are better defined, this will be the curse of referees at all levels of the game.