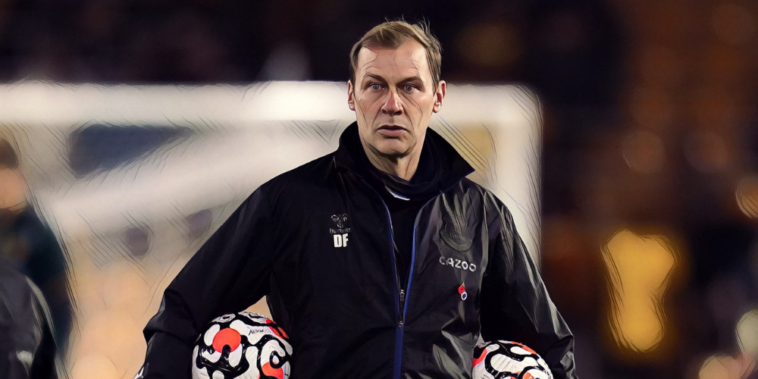 Duncan Ferguson admits he was unsurprised to see Rafael Benitez sacked as Everton manager and has played down his own chances of replacing the Spaniard.

Ferguson has been placed in interim charge following the decision to sack Benitez last weekend, with Everton having won just one of their past 13 league games to fall down the division.

The Toffees are just six points above the relegation places ahead of tomorrow’s Premier League clash with Aston Villa, but Ferguson was in positive mood ahead of the clash and says the mood in the squad is ‘upbeat’.

“It’s been a good week,” Ferguson said at his pre-match press conference.

“The players are upbeat, the sessions went well and I’m happy with how it has been. It is a different voice as well, that’s the big difference, you always get a reaction with the players. I pushed them as hard as we can. I want them to keep the intensity.”

Ferguson has been named as a potential candidate for the role on a permanent basis, having enjoyed a positive period during his previous spell as interim boss in 2019.

The Scot has played down suggestions he could succeed Benitez, however, and says his focus is on the next game and turning round the club’s fortunes.

“I think down the line, maybe one day down the line,” Ferguson said on taking the job permanently. “I’ve not quite got that experience. My job is take the upcoming games and steady the ship. I’m sure they will identify the new manager and get someone in.

“You never know in football, but my job is to focus on the next game. Sure there will go through the process and always be interested in the best managers in the world.”

Big Dunc is not messing around at Everton! 💥 pic.twitter.com/sQUeDn7KH5

The 50-year-old also spoke on Benitez’s exit and admits he was not surprised to see the Spaniard sacked, insisting results had not been good enough following a dreadful run of form.

“I have told the players what is needed as an Everton player and what the fans demand. That’s what I’m banging onto them about. In the past, it’s not been good enough. We need to show fans what we’re all about and make sure they fight for their shirt.

“We have to show fans we care and show that fight and determination to get results. that’ll help bring the fans along with us even more.”

Asked if the players know what it takes to play for a club like Everton, Ferguson replied: “They should do now, put it that way.

“They are determined to show their true colours but they’ve been on the floor. If you get bad results it rolls on and its hard to turn that around.

“This week we have tried to get a bit of confidence into them and try to tell them home truths, they’ve been good on the training ground but it’s only there on the pitch where it counts.”

Ferguson also discussed what he has learned from working under Carlo Ancelotti, revealing the former Everton manager called him following his appointment as interim boss.

“Carlo was a fantastic manager, I learned a lot from him, he’s great manager, great tactician , great with the lads and a real inspiration to me.

“He had the lads flying and it tailed off a little bit. I’ve spoken to him, he called me. Unbelievable manager and one of the best in the world so I’ve learned a lot from him.”