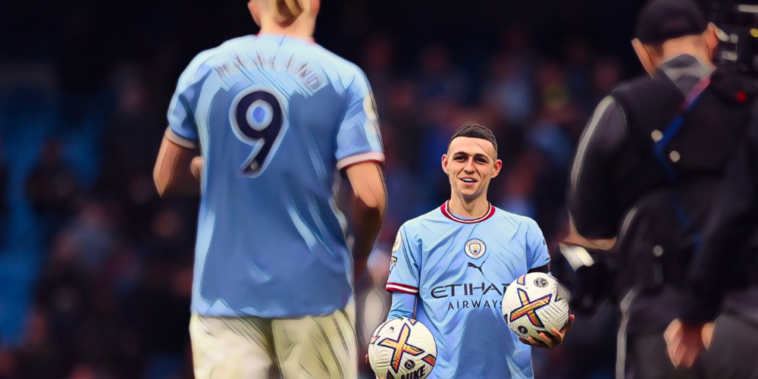 Erling Haaland and Phil Foden each claimed a match ball at the Etihad, as Pep Guardiola’s side ran riot to thrash Manchester United 6-3.

Arsenal were the first team to have two hat-trick scorers in the same fixture, as the Gunners thrashed Southampton 6-1 in May 2003.

Jermaine Pennant and Robert Pires each helped themselves to trebles as the Saints were hit for six, with the former celebrating his Premier League debut with the match ball.

In a dress rehearsal for the upcoming FA Cup final between the teams, Arsenal ran riot with Pennant enjoying a league debut to remember. Pires opened the scoring for the north Londoners, who were 5-0 up inside 25 minutes at Highbury.

Pennant then scored a quick-fire brace, as he fired home a low effort for his first Premier League goal, before heading in from close range for a second just moments later. Pires’ brace followed soon after, as he latched onto Thierry Henry’s pass to make it four.

Pennant rifled in a third – with his hat-tricking coming in a ten-minute spell – before Pires rounded off the rout in the second half with the best of the lot, an audacious lob over Paul Jones from distance.

Southampton were also on the receiving end of the Premier League’s second double hat-trick, as Leicester recorded the division’s biggest ever away win in 2020.

Brendan Rodgers’ side equalled the biggest ever Premier League victory, and largest ever on the road, as the Foxes swept aside 10-man Southampton at a rain-soaked St Mary’s.

Jamie Vardy and Ayoze Perez each scored hat-tricks, as Leicester capitalised on an early red card for Ryan Bertrand to run riot on the South Coast.

After goals from Ben Chilwell and Youri Tielemans opened the floodgates, Perez and Vardy took centre stage. The former’s hat-trick came inside 57 minutes, while Vardy’s 94th-minute penalty – which came moments after James Maddison netted an eighth for the visitors – completed his own hat-trick and a record-breaking scoreline for the Foxes.

City blew apart their greatest rivals in an exhilarating attacking performance, with Haaland and Foden in clinical form for the home side.

Haaland’s treble took his total to 14 goals in just eight league games for City, while he became the first Premier League player to score a hat-trick in three consecutive home fixtures after previous trebles against Crystal Palace and Nottingham Forest.

One for Phil Foden and one for Erling Haaland 😌 pic.twitter.com/Ta4S7lk8Wt

Foden has never previously scored in a Manchester Derby, but picked the perfect time to get up and running as the Stockport-born forward netted his first senior hat-trick.

Foden’s second goal moved him to 50 in City colours, with the 22-year-old the youngest player to reach a half-century under Pep Guardiola’s management, surpassing Lionel Messi.