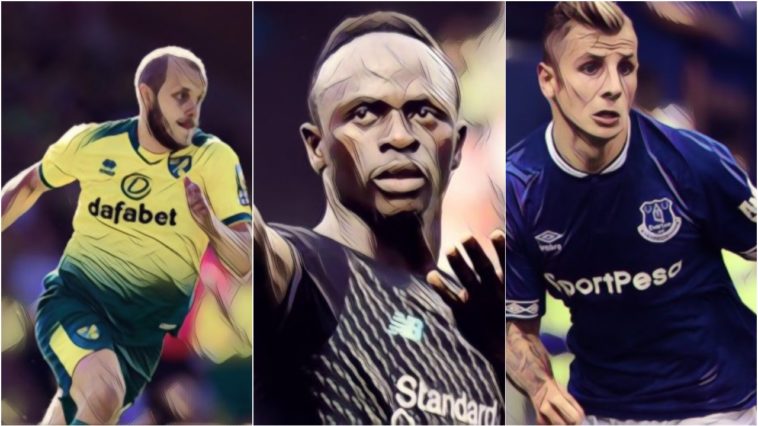 Gameweek 2 saw the second hat-trick of the Premier League season, with a certain Norwich City forward already looking like potentially one of the bargains of the Fantasy Premier League campaign.

Managers will now have a better indication of their choices after round two, but has your team delivered in the opening fortnight of the new campaign?

Throughout the new season we compile a weekly dream XI of the game’s biggest points getters, the players who score highest in each game week regardless of price.

Here is our Fantasy Premier League Team of the Week:

Wolves goalkeeper Rui Patricio earns his place in our Fantasy Team of the Week, courtesy of a fine penalty save to deny Manchester United‘s Paul Pogba and secure his side a point at Molyneux.

The Portuguese international’s performance in the 1-1 draw also earned him two bonus points, giving him a tally of nine points for GW2.

Eagle-eyed fantasy football fanatics will have noticed Sheffield United’s Lundstram is listed as a defender in the game, despite featuring in midfield for Chris Wilder’s side so far this season.

Those fans were rewarded in Gameweek 2 as Lundstram scored the only goal in his side’s 1-0 win over Crystal Palace, earning a huge 14 points for his performance.

Six points for a defender goal, plus clean sheet and three bonus points contributed to his total, with a minus one for a yellow card the only negative.

Lundstram began the season at just £4m but that price will surely rise should he continue his form in the coming weeks.

A low-scoring week for defenders, with Sheffield United and Everton the only Premier League sides to keep a clean sheet this weekend.

Everton centre-back Mina earns his place in our side courtesy of a total of seven points, having earned one additional bonus point following a clean sheet and 90 minutes on the pitch.

Sheffield United’s Enda Stevens could also have featured in our team, having also earned seven points this weekend.

The equal-highest scoring defender in the game after two fixtures, Everton’s Lucas Digne totalled 11 points during their 1-0 win over Watford on Saturday.

The French full-back kept a second successive clean sheet of the new season, whilst he also earned two bonus points after providing the assist for Bernard’s winner with a fine pass from deep early on.

Who is the best left-back in Premier League history?

The Arsenal midfielder impressed on his first start since joining on loan from Real Madrid, providing the assist for both goals as Unai Emery’s side beat Burnley 2-1 at the Emirates.

The Belgian starred in Manchester City‘s 2-2 draw with Tottenham Hotspur on Saturday evening, providing a pair of superb assists for Raheem Sterling and Sergio Aguero.

The 28-year-old’s cross for Sterling’s opener has led to comparisons with David Beckham, whilst De Bruyne was simply unplayable as City were unfortunate not to take all three points.

His performance earned him the Man of the Match honours, and three bonus points in Fantasy Premier League.

The diminutive Brazilian fired Everton to their first win of the season, hitting the only goal as Marco Silva’s side beat Watford 1-0 at Goodison Park.

As well as his goal, Bernard’s performance saw him earn three bonus points, whilst he also earned an additional point to his tally for a midfielder clean sheet.

A goal and an assist for Lamela against Manchester City, the Argentine helping Mauricio Pochettino’s side to a 2-2 draw at the Etihad.

Lamela curled home an opener away from the grasps of City goalkeeper Ederson, before his corner was headed home by substitute Lucas Moura.

The highest scoring midfielder of GW2, Liverpool‘s Sadio Mane marked his first start of the Premier League season with a goal and an assist in their 2-1 win at former club Southampton.

Mane opened the scoring with a stunning effort from distance, before robbing possession to tee up Roberto Firmino for Liverpool’s second to earn himself three bonus points.

An expensive outlay at £11.5m, but the Senegalese forward is worth the investment.

Given his chance by Manuel Pellegrini following an injury to club record signing Sebastien Haller, the Mexican forward responded with a goal in West Ham’s 1-1 draw with Brighton.

Hernadez’s goal was enough to earn him two bonus points, giving him a Gameweek 2 score of eight points.

The star man from Gameweek 2, Norwich striker Pukki has adapted seamlessly to life in the Premier League following the Canaries promotion to the top flight.

It’s now four goals in two games for the Finnish forward, who hit a hat-trick of the highest quality to see off Newcastle 3-1 at Carrow Road.

Pukki’s treble saw him earn 17 points for Gameweek 2, his price having already risen by £0.2m just two weeks in to the new campaign.