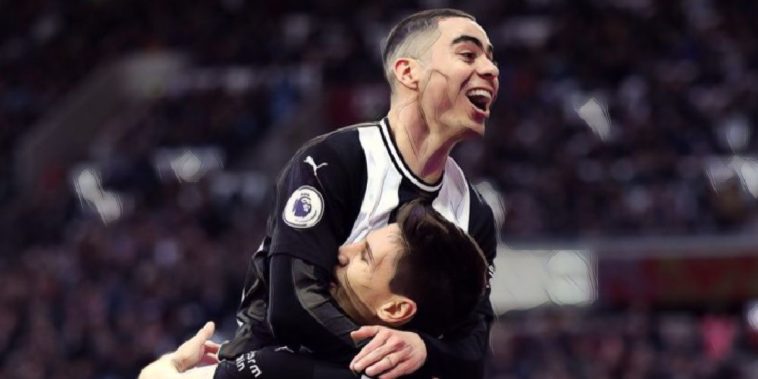 League leaders Liverpool’s absence from Gameweek 18 due to Club World Cup duty will have no doubt caused headaches for the majority of Fantasy Premier League managers, with stars such as Sadio Mane, Virgil van Dijk and Trent Alexander-Arnold amongst the highest owned players in the game.

Of those in action, however, the in-form Jamie Vardy and Danny Ings continued their fine form, whilst Newcastle midfielder Miguel Almiron rewarded his ridiculously loyal 0.4% ownership with his first goal in English football – the Paraguayan finally finding the net after 11 months at St James’ Park.

Following the weekend’s action we’ve rounded up the stars of Gameweek 18, here is The Football Faithful‘s FPL Team of the Week for the latest round of fixtures…

Sheffield United‘s impressive season back in the big time continues, this weekend’s 1-0 win at Brighton their third in succession and leaving Chris Wilder’s side fifth in the Premier League table.

Their defensive solidity has been a major factor behind their success this far, Henderson’s seven clean sheets the joint highest tally in the division this season alongside Nick Pope and Kasper Schmeichel, a tally that leaves him as the highest-scoring goalkeeper in FPL.

Henderson was also awarded an assist this weekend for his contribution to Oli McBurnie’s goal, in addition to three bonus points to pick up a Gameweek high total of 12 points amongst FPL goalkeepers.

Southampton‘s struggles this season have made their defenders unpopular picks, though budget-priced Stephens would reward the managers who have found a place for him in their squads with a goal this weekend.

The goal helped the Saints to a huge win against Aston Villa, lifting them out of the relegation places at Villa’s expense, and in the process earning the 25-year-old 10 FPL points for the week, comfortably his highest tally of the season so far.

Another defender with low ownership due to his side’s position at the foot of the table, the 0.2% of managers owning Kabasele received a welcome boost of 11 points from the Belgian defender this weekend.

The 28-year-old formed part of the defence which sealed a shut-out 2-0 victory over Manchester United on Sunday, securing their first home win of the season and provided the assist for Ismaila Sarr’s opener at Vicarage Road.

That performance earned Kabasele an additional two bonus points for a tally of 11, delivering his best haul of the campaign.

The most forgettable game of the weekend occurred on Saturday lunchtime at Goodison Park, Everton and Arsenal playing out a bore-draw in the final fixture of each club’s interim manager’s reign.

The game was perhaps memorable only for the 4.9% of FPL managers in possession of Brazilian defender Luiz, the Arsenal centre-back scooping the three bonus points as the best player on the field following his display in preserving a clean sheet.

The equal highest-scoring defender of the round is Chelsea‘s Marcos Alonso, the Spanish wing-back playing his role in the club’s win over Tottenham this weekend.

Former fantasy favourite Alonso formed part of a back five that created greater solidity for Frank Lampard‘s side, shackling the likes of Harry Kane and Lucas Moura to earn a precious clean sheet and victory over their London rivals.

Alonso’s tally of 11 points was boosted by an assist for winning his side’s penalty in their 2-0 win, the 28-year-old wiped out in comical kung-fu fashion by Spurs goalkeeper Paulo Gazzaniga.

A budget option midfielder who has proven a popular pick this season, Norwich’s Cantwell rewarded his 20.8% ownership with another goal in the Canaries defeat to Wolves this weekend.

Despite the defeat, the youngster secured the three bonus points as the games best player, his season tally now standing at an impressive 71 points following five goals and two assists for Daniel Farke’s side so far.

The highest-scoring player of Gameweek 18 is Chelsea star Willian, the Brazilian proving the match-winner against Tottenham with a two-goal haul in the first half.

The winger would fire home a superb effort early on, before adding a second from the penalty spot to secure a huge victory for Frank Lampard’s side against their London rivals.

Willian’s performance earned him a huge 16 points for Gameweek 18, his two goals further boosted by a midfielder clean sheet and an additional three bonus points.

Surprisingly below the likes of N’Golo Kante and Jorginho in terms of ownership, Willian is now the highest-scoring Chelsea midfielder in FPL.

Watford’s club-record signing has endured a difficult adaptation to life in the Premier League since his switch from Rennes during the summer, but bounced back from a howler at Liverpool last week to play a key role in the club’s win over Manchester United.

The Senegalese winger would open the scoring in fortuitous circumstances as David de Gea failed to deal with his effort, before bursting into the box to win the penalty which Troy Deeney converted for the Hornets’ second.

His goal and assist saw him register 13 FPL points, his first double-digit haul since arriving in English football.

It finally happened, Miguel Almiron has his first goal for Newcastle. It’s been quite the wait.

The Paraguayan finally opened his account for the club some 11 months after his then club-record arrival, scoring a later winner against Crystal Palace to lift Steve Bruce’s side to ninth in the division.

Remarkably despite his toils around goal, he is still owned by some FPL managers, who will no delight have been delighted to see him get off the mark.

His 10 points were easily his best haul of the season, and hopes will be high that the floodgates have now been opened…

If anyone deserved a goal – it was him.

The highest-scoring player in FPL continued his strong season, delivering an attacking return for the tenth game in succession after finding the net in Leicester‘s 3-1 defeat to Manchester City.

It’s now a huge 17 goals and 142 FPL points for the season for the 32-year-old, whose value and ownership continues to soar as he plays a crucial role in the Foxes bid to secure Champions League football next season.

The second of two forwards in red-hot form right now, Southampton’s Danny Ings scored twice to secure his side a precious 3-1 victory at Aston Villa this weekend.

It’s now 11 goals for the season for Ings, with only Vardy having scored more in the Premier League so far this season.

The 27-year-old’s brace at Villa Park earned him a season-best tally of 13 FPL points, the forward proving incredible value for money at just £6.5m

The Saints face a difficult looking run of fixtures over the festive period, but few would bet against Ings continuing his streak based on recent showings.