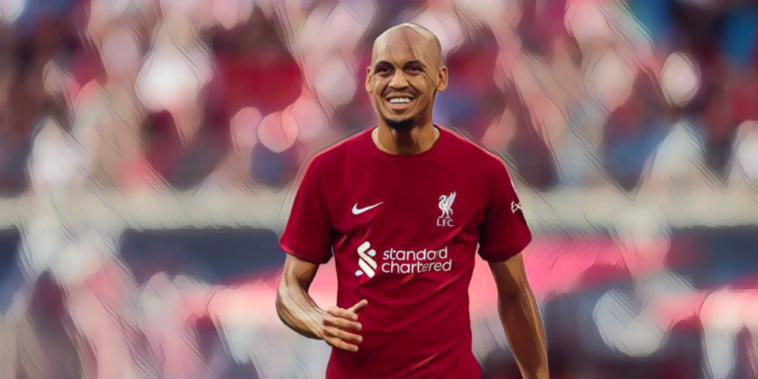 Fabinho has recalled Liverpool’s 5-0 win at Manchester United last season and has opened up on his motivations ahead of Monday’s clash between the teams at Old Trafford.

Liverpool humiliated their great rivals in the same fixture last season, as the Reds ran riot across the first half to four goals before the break and pile the pressure on Ole Gunnar Solskjaer’s side.

Mohamed Salah became the first opposition player to score a Premier League hat-trick at United, in a ruthless attacking performance from Liverpool.

Fabinho missed that clash through injury but has recalled his memories of a record-breaking win, admitting he was calling on his teammates to continue pushing forward in search of more goals.

“I remember the last away game against United, I was watching at home and sometimes I was shouting at the TV,” Fabinho said, as per the Guardian. “To be honest, I wanted the team to attack more to try and score more goals because we had one more player in that moment, but it was the moment where the team tried to control more of the game and to stabilise the ball.

“As a fan, I wanted the team to score more because it was a big opportunity to do a historic score at Old Trafford but of course 5-0 was not bad. I was more on the fan side than a player side that day but then, because you are on the pitch so often, you understand both sides. I think the fans were happy with the 5-0.”

Both teams head into Monday’s clash in need of a positive result, having began the Premier League without a win. Liverpool have stuttered with successive draws, while United are in the division’s bottom three after back-to-back defeats.

Fabinho insists his side are focused on securing their first three points of the campaign and admits he doesn’t care if a Liverpool win pushes United ‘a little bit more into crisis’.

“I don’t care if a win pushes them a little bit more into crisis, I just want to beat them and win three points.

“It is always a big game and during the week the media talks a lot about this game. Playing there is never easy and we know that if we win the fans will be happy to beat our rivals. We need three points as well. It will be our first three points in the competition so there are a lot of things that give us motivation.”