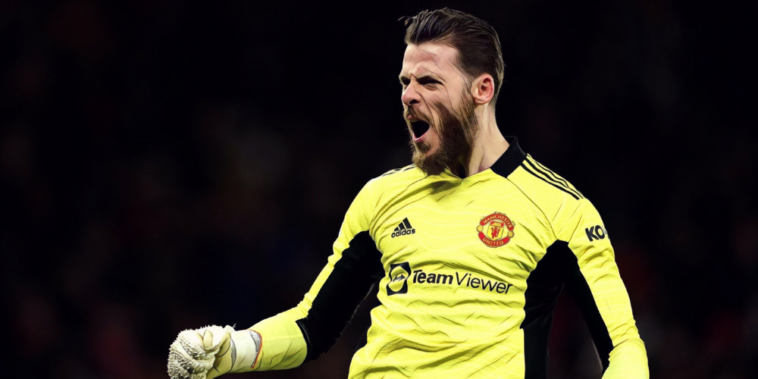 David de Gea has been named as the Premier League’s Player of the Month for January, with the Manchester United goalkeeper having become the first shot-stopper since 2016 to receive the accolade.

It is remarkably the first time De Gea has claimed the division’s Player of the Month award, despite several seasons of heroics as the Red Devils’ number one, performances which have seen the Spaniard named as the club’s Player of the Season on four occasions.

Goalkeepers can often be overlooked when it comes to individual acclaim and De Gea joins an exclusive list of Premier League goalkeepers to have taken the monthly prize.

Here are the nine Premier League goalkeepers to have won the Player of the Month award.

David Seaman became the first goalkeeper to receive the accolade, earning the Player of the Month award in April 1995.

The 1994/95 campaign was a poor one for the Gunners who finished in the Premier League’s bottom half, with Seaman rather busier than most would have expected before a ball had been kicked.

He was named as Player of the Month after helping the North Londoners to three wins in April, a sequence of results that moved the club clear of relegation fears – just four years after their last title.

Tim Flowers was one of the Premier League’s best goalkeepers during the mid-nineties, forming part of the Blackburn Rovers team crowned as league champions in 1994/95.

Blackburn were unable to replicate that success in the following seasons, but Flowers remained a consistent performer and won the Premier League’s Player of the Month accolade after keeping three consecutive clean sheets in January 1997.

Flowers is the only Premier League goalkeeper to have won the award twice, having also earned the honour whilst representing Leicester in September 2000. The Foxes had made a brilliant start to the 2000/01 campaign, sitting top of the Premier League after eight games.

Few would have been able to name Alex Manninger among the goalkeepers to have earned Player of the Month accolades, with the Austrian having been a back-up option during his five seasons at Arsenal.

He was handed a run in the side during David Seaman’s absence in the 1997/98 season and impressed, however, keeping six successive clean sheets.

His run of shut-outs included one in the 1-0 win over Manchester United at Old Trafford, a victory which swung the momentum of the title race in the favour of the North Londoners.

Paul Robinson broke into the Leeds team during the 2000/01 season and was named as the Premier League’s Player of the Month in November.

Leeds kept just one clean sheet in their four fixtures during the month, but the impressive performances of their young shot-stopper earned Robinson the accolade.

He made 24 appearances in all competitions during a season in which Leeds reached the semi-finals of the Champions League, making 113 appearances for the club before spells at Tottenham and Blackburn.

Petr Cech holds a number of Premier League records, including the most clean sheets ever recorded (202) and the most managed in a single season (24).

The former Chelsea goalkeeper is also one of the nine shot-stoppers to have won the Premier League’s Player of the Month award, earning the prize during an unbreachable period in March 2007.

Mark Schwarzer proved a shrewd signing for Fulham after his arrival from Middlesbrough, the west Londoners signing the veteran goalkeeper on a free transfer in 2008.

He spent five seasons with Fulham and formed part of a successful period at Craven Cottage, making 218 appearances in all competitions and being named as the Premier League’s Player of the Month in February 2010.

The month saw Fulham keep four clean sheets in just five fixtures, conceding only one goal during an unbeaten run that moved the club into the Premier League’s top half.

Schwarzer also impressed as Fulham reached the final of the Europa League later that season, upsetting the likes of Juventus and Wolfsburg before an extra-time defeat to Atletico Madrid in the final.

Newcastle’s unbeaten run during November 2013 saw Tim Krul named as Player of the Month, the Dutch international having been instrumental to the Magpies’ climb up the table.

Alan Pardew’s side secured four consecutive wins, a run of results that included clean sheets in wins over Chelsea and Tottenham.

Krul’s finest performance came in the win over the latter with the goalkeeper making a string of outstanding saves in a 1-0 win at White Hart Lane.

🏆 No goalkeeper has ever made more saves in a PL game in that time pic.twitter.com/dmomnTBRYp

He made 14 saves in total against Spurs, setting a new Premier League record in the process.

Fraser Forster set a new club record after going 708 minutes without conceding a goal for Southampton during the 2015/16 season, with the goalkeepers run of solidity rewarded with a Player of the Month accolade.

Southampton finished the league season in sixth, the club’s highest position and points total (63) of the Premier League era.

David de Gea has added his name to the list of goalkeepers to have claimed Player of the Month awards, following his performances in January 2022.

The Spain international has been arguably the Red Devils’ most consistent performer this season and made 22 saves during the month, helping his side to back-to-back wins over Brentford and West Ham before the international break.

David De Gea is the first goalkeeper to win Premier League Player of the Month since 2016 🤯 pic.twitter.com/VZa34EsZY4

United have struggled defensively this season, but without the presence of De Gea in goal their fortunes would have been significantly worse.