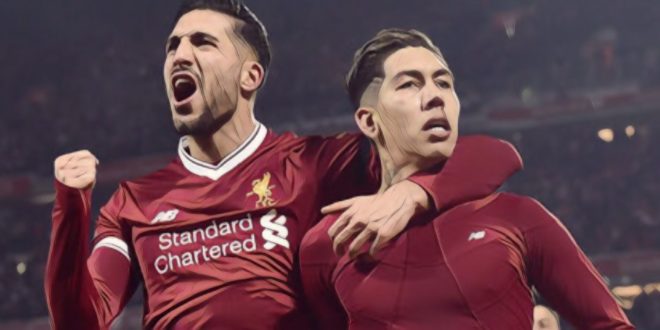 Rating the 15 players Liverpool have signed from the Bundesliga

Thiago Alcantara continues to be linked with a summer move to Liverpool, the midfielder having informed Bayern Munich of his desire for a new challenge after seven seasons with the German giants.

Jurgen Klopp has previously made no secret of his admiration for the Spain international and a move to the Merseyside looks a real possibility this summer, and it would not be the first occasion that Liverpool have looked to Germany in search of top talent in the Premier League era.

Ahead of the potential move we’ve decided to look back at the Reds’ previous Bundesliga buys, rating the impact of the 15 players Liverpool have signed from Germany’s top tier:

Liverpool’s first signing from the Bundesliga was Patrik Berger from Borussia Dortmund in 1996, the winger arriving after impressing as the Czech Republic reached the final of that summer’s European Championships in England.

Berger’s career in English football began brilliantly as he was named as the division’s Player of the Month for September, scoring braces in victories over Leicester and Chelsea to instantly endear him to the Reds support.

He scored nine goals during his debut campaign and became an important figure over the next few seasons, his lethal left-footed shooting marking him out as a fans’ favourite as he scored a series of spectacular efforts.

Enjoy some of the Czech's finest #PL strikes 💥 🚀 👌 pic.twitter.com/QnG2lWH9tw

Berger formed part of the side which won a UEFA Cup, FA Cup and League Cup treble under Gerard Houllier during the 2000/01 campaign, but injuries decimated his latter years on Merseyside and he left for Portsmouth in 2003 having scored 35 goals in 195 appearances in all competitions.

The former Germany international joined former Borussia Dortmund teammate Berger at Liverpool the following summer, the veteran forward arriving with a big reputation having won the World Cup and Champions League amongst his honours.

Riedle was signed as a replacement for the departing Stan Collymore but struggled to command a regular first-team position despite his abundance of experience, scoring 15 goals over a two season spell as he struggled for minutes amid competition from Robbie Fowler and a teenage Michael Owen.

Another forward who failed to make an impression due to the presence of homegrown heroes Fowler and Owen, Meijer signed for Liverpool from Bayer Leverkusen in the summer of 1999.

The one-cap Netherlands international scored just two goals during his 18-month spell at Anfield but developed a reputation as a cult hero on Merseyside, the towering striker’s committed displays earning him recognition amongst the Liverpool support.

Emile Heskey’s arrival ultimately ended Meijer’s hopes of regular first-team football, however, though he further enhanced his popularity by partying with Reds’ fans before the 2001 UEFA Cup final several months after leaving the club for Hamburg.

Markus Babbel arrived at Liverpool with a reputation as a serial winner following two spells with Bayern Munich, winning three Bundesliga titles, two German Cups and the UEFA Cup during his time with the Bavarian giants.

The German quickly established himself as a fixture in the side at right-back and was a virtual ever-present during their cup treble-winning season under Gerard Houllier in 2000/01, scoring an early opener during the thrilling 5-4 victory over Alaves in the UEFA Cup final in Dortmund.

Babbel’s career in English football was sadly halted as he was diagnosed with the debilitating Guillan-Barre syndrome, an illness which left the defender in a wheelchair before he bravely fought back to return to football just 15 months later.

The full-back failed to return to his previous heights in Liverpool Red, however, and spent a season on-loan at Blackburn Rovers before returning to Germany with Stuttgart, helping the Bundesliga side to their first German championship in more than a decade during his final season as a player in 2006/07.

Alou Diarra arrived at Liverpool from Bayern Munich as one of many young French midfielders dubbed the new ‘Patrick Vieira’, his powerful style earning comparisons to Arsenal’s all-action midfield general.

Diarra had left Bayern in search of regular football after failing to make a first-team appearance for the Bavarians, but his opportunities were further limited at Liverpool as he was immediately sent out on loan.

His three seasons at Anfield saw him loaned out to Le Havre, Bastia and Lens, before joining the latter permanently having failed to make an appearance for the Merseyside club. Diarra later built an impressive career in his homeland during spells at Lyon, Bordeaux and Marseille, earning 44 caps for the French national side and later enjoying a brief return to English football with West Ham and Charlton.

Liverpool thought they had pulled off a shrewd piece of business with the free transfer capture of Andriy Voronin from Bayer Leverkusen in 2007, the Ukrainian international having enjoyed a productive three-year stint with the Bundesliga side – scoring 32 goals in 92 appearances.

Rafael Benitez had been impressed by the forward during a Champions League meeting between Liverpool and Leverkusen, but he struggled to replicate that form after moving to the Premier League.

Voronin scored six goals in all competitions during his debut season but struggled for regular football amid the presence of fellow summer signing Fernando Torres, the pony-tailed poacher shipped out on loan to Hertha Berlin following an entirely forgettable campaign .

He returned the following year as a peripheral figure before joining Dynamo Moscow on a permanent basis.

Rafael Benitez seemed to be compiling a right-back ‘Hall of Shame’ during his early years at Liverpool with the less than stellar talents of Josemi and Jan Kromkamp featuring, but it was arguably Phillip Degen who proved the worst of a bad bunch.

The Switzerland international won two league titles in his homeland with Basel before an injury-hit three years at Borussia Dortmund, joining Liverpool on a free transfer during the summer of 2008.

Samed Yesil was earmarked as a star of the future following his prolific form for Germany at youth level, the forward’s 20 goals in just 21 appearances for the nation’s U-17 side prompting Brendan Rodgers to secure the teenager’s signing in a £1m deal.

Yesil had made a brief breakthrough into the Bayer Leverkusen first-team before his move to England but he made just two first-team appearances for the Reds, featuring in League Cup ties against West Brom and Swansea before a nightmare run with injuries.

The forward twice ruptured his anterior cruciate ligament in the space of a year and never recovered to make an impression on Merseyside, loaned out to Swiss side FC Luzern before being released on a free transfer at the end of his contract in 2016.

Liverpool secured the signing of the promising Emre Can from Bayer Leverkusen in 2014, with the midfielder quickly establishing himself as a first-team regular under the guidance of Brendan Rodgers and later Jurgen Klopp.

The Germany international’s powerful frame and versatility made him ideally suited to the demands of the Premier League, deputising in a variety of roles both in midfield and in the backline.

Can made over a century of Premier League appearances for the Reds over a four-year spell and scored some spectacular goals – including a Goal of the Season winner against Watford in 2017.

Who remembers when Emre Can did this for Liverpool? 😱🤯pic.twitter.com/kN0ggjYZS1

After four seasons and no silverware, however, Can opted to leave the club on a free transfer and join Juventus, winning an Italian league title before returning to Germany with Borussia Dortmund earlier this year.

Described as the ‘engine’ of Jurgen Klopp’s all-conquering Liverpool side, Roberto Firmino was signed from Hoffenheim by former manager Brendan Rodgers before thriving as the focal point of Klopp’s formidable Reds outfit.

The Brazilian combines a sublime Samba style with a notorious work-rate, setting the tempo for Liverpool’s pressing play and acting as the ‘connector’ for the club’s fabled front three.

Firmino’s selfless but silky style has seen him become one of the most influential forwards in world football at present and a firm fans’ favourite on the Kop, scoring 78 goals over five seasons and winning the Champions League and Premier League amongst his major honours.

Now the highest-scoring Brazilian player in Premier League history, Firmino is a fundamental part of a Liverpool side seeking to dominate English football in the coming seasons.

Amongst Jurgen Klopp’s first signings as Liverpool manager, the German secured a deal for centre-back Matip following the expiry of his contract with Schalke.

The defender has proven a fine piece of business for the Reds since moving to English football four years ago, establishing himself as an important figure in the squad and producing a series of commanding performances during the club’s run to Champions League success in 2019.

Dominant in the air and comfortable in possession, the 28-year-old is likely to continue competing with Joe Gomez for a position alongside Virgil van Dijk at the heart of the defence and will hope to recover from a recent run with injuries to force his way back into the side.

Augsburg’s Ragnar Klavan became the most expensive Estonian footballer of all-time when moving to Liverpool for a fee of €5m in 2016, the experienced defender signed as a replacement for the outgoing Kolo Toure.

Klavan spent two seasons with the club and made 39 Premier League appearances, becoming the first of his countrymen to score in England’s top tier with a stoppage-time winner at Burnley in 2018.

Amid increased competition he departed for Cagliari in search of regular first-team football later that same year, the defender a stop-gap signing as Liverpool restructured their backline.

Manninger followed former Augsburg teammate Klavan to Liverpool in the summer of 2016, the veteran goalkeeper signed as a back-up option to add depth to Jurgen Klopp’s squad.

The former Austrian international – who previously had a five-year spell at Arsenal – failed to make a single first-team appearance before announcing his retirement from football in 2017.

Karius was viewed as a potential long-term solution to Liverpool’s goalkeeping woes after signing from Mainz 05 in a £4.75m deal four years ago, the former Manchester City youth player displacing Simon Mignolet as the Reds’ number one.

The German, however, struggled to convince and made a number of high-profile mistakes, most notably during a nightmare performance in Liverpool’s Champions League final defeat to Real Madrid in 2018.

Karius made two howlers to end his side’s hopes of success in Europe, his now infamous performance prompting Jurgen Klopp to spend a world-record fee to sign Alisson Becker from Roma.

Karius has spent the past two seasons on loan at Besiktas but will return to Merseyside this summer, the future of the 27-year-old appearing uncertain at present.

Liverpool’s most expensive Bundesliga buy, Naby Keita arrived in the Premier League amid much fanfare following a protracted chase for the all-action midfielder.

Jurgen Klopp was prepared to wait a year to land the Guinea international from RB Leipzig, but Keita’s career in English football is yet to truly ignite amid a succession of injury problems.

The 25-year-old has shown glimpses of his huge potential and provides a different option to Liverpool’s workman-like midfield, his ability to ghost past opposition challengers and dribble in tight areas marking him out as a unique talent.

Klopp will hope the midfielder can move on from his injury nightmare and establish himself as a key figure in the side, the £52.75m signing impressing over the second half of the campaign in a midfield which has delivered Champions League and Premier League success over the past two seasons.