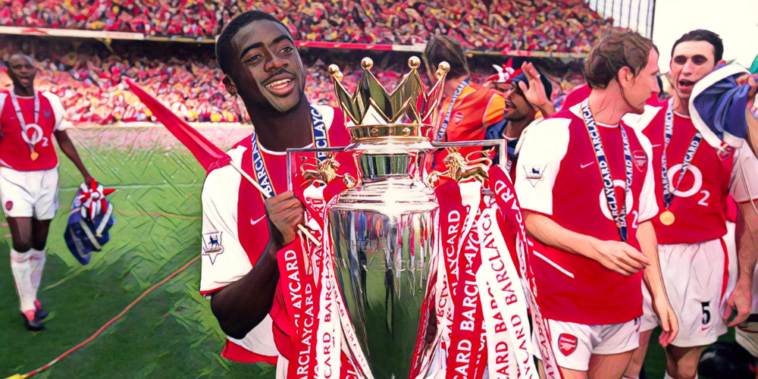 Arsenal have completed their second signing of the summer from Manchester City, with Oleksandr Zinchenko having completed his move to the north Londoners.

Zinchenko follows former teammate Gabriel Jesus to the Emirates, who completed a £45m move to Arsenal earlier in the window to continue a long line of players to have represented both clubs in the Premier League era.

Following the duos respective transfers, we look at every player to have played for both Arsenal and Manchester City in the Premier League.

Dickov joined the youth ranks at Arsenal from Livingston but failed to establish himself in the senior side, making just 20 league appearances for the Gunners.

Loan spells at Luton and Brighton aided his development, before the forward signed for Manchester City in a permanent deal.

Dickov spent six seasons with City and became a cult figure at the club, with his iconic 95th-minute goal taking the third-tier play-off final to extra-time in 1999.

City won the tie and climbed from the third tier into the Premier League in consecutive campaigns, with Dickov making 158 league appearances for the club before leaving for Leicester.

Nicolas Anelka emerged as one of English football’s most exciting talents at Arsenal, with the teenager enjoying a meteoric rise after signing for the Gunners from Paris Saint-Germain.

Anelka’s first full season saw the forward win a Premier League and FA Cup double, scoring nine goals in all competitions including the second as Newcastle were beaten in the latter final at Wembley.

The Frenchman was named as the PFA Young Player of the Year the following season, having scored 17 league goals to finish as runner-up for the Premier League’s Golden Boot.

He departed to sign for Real Madrid in a club-record £22.3m deal that summer, but struggled to make an impression in Spain and began a nomadic existence after leaving the Bernabeu.

Anelka signed for City in 2002 and enjoyed one of the most settled periods of his career with the club, scoring 45 goals in 103 appearances across two-and-a-half seasons.

One of Arsenal’s all-time greats, David Seaman spent more than a decade keeping goal in commanding fashion for the Gunners.

THE greatest save in #EmiratesFACup history? 🧤

He joined City after leaving the club in 2003 and made 26 appearances during a single season in Manchester before his retirement.

Patrick Vieira was the beating heart of Arsenal’s best sides of the Premier League era, a midfielder who combined strength and skill with a ferocious competitive streak.

One of the best central midfielders of the Premier League era, his marauding midfield presence helped the Gunners to three league titles and four FA Cups.

Vieira won domestic doubles in 1998 and 2002, before captaining the north Londoners during their famous 2003/04 campaign in which Arsenal completed the entire Premier League season without defeat.

After a spell in Italy with Juventus and Inter Milan, he returned to England to sign for City and made 46 appearances across his two seasons with the club.

For a period following City’s transformative takeover, Arsenal became a hunting ground for the billionaire-backed Blues who routinely raided the best talent from their Premier League rivals.

Emmanuel Adebayor became the first to make the move after completing a £25m switch to the Etihad in 2009, having scored 62 goals in 142 games for the Gunners – including a 30-goal campaign which saw the forward named as African Footballer of the Year in 2008.

The Togo international controversially ran the full length of the pitch to celebrate in front of the travelling Arsenal fans after scoring against his former side, during a bright start to his City career.

Adebayor scored 14 goals during his first season at City, but fell out of favour during his second campaign and was allowed to leave on loan for Real Madrid.

Kolo Toure joined Adebayor in making the move from Arsenal to City in 2009, joining the club’s ambitious project in a £14m deal.

The centre-back was one of Arsene Wenger’s best finds during his time in north London, with the defender signed for a fee of just £150,000 before making 326 appearances for the Gunners.

He formed part of the club’s fabled ‘Invincibles’ side during the 2003/04 campaign and also starred as Arsenal reached the Champions League final in 2006, a run which included a record 10 consecutive clean sheets.

Toure made 102 appearances for City after making the move north, winning both the Premier League and FA Cup before a free transfer move to Liverpool.

Gael Clichy joined Manchester City in 2011, with Roberto Mancini strengthening his full-back options with another raid on Arsenal.

The Frenchman had made 264 appearances across eight seasons with the Gunners, in which he won the Premier League and FA Cup in his early seasons before emerging as the long-term replacement for Ashley Cole.

Clichy won a further two league titles after making the move to the Etihad, winning six major honours across his spells with the two clubs. He left City to sign for İstanbul Başakşehir on a free transfer in 2017 after 203 games for the club.

Samir Nasri followed the increasingly well-trodden path from Arsenal to Manchester City in 2011, having become a fans’ favourite during his four seasons with the Gunners.

Signed from Marseille, the midfielder developed into one of the most cultured creative talents in the Premier League at Arsenal with his evasive dribbling skills and ability to pick passes between lines.

Nasri’s final season saw him score 15 goals in all competitions to be nominated for the PFA Player of the Year award, before joining City in a £25m deal.

Wrapping up a big Manchester Derby win with a lovely volley! 💪

He won two Premier League titles and made 176 appearances in all competitions for the Citizens, in which he scored 27 goals – including the winner in the 2014 League Cup final – and provided 40 assists.

The fifth Arsenal player in five summers to make the switch to City, Sagna signed for the latter on a free transfer in 2014.

The French full-back had been a favourite across his seven seasons with the Gunners with his committed approach to defending well appreciated in north London.

Silverware largely proved elusive, though Sagna won the FA Cup during his final season at the Emirates, starting the extra-time win over Hull at Wembley.

He made 86 appearances following his move to Manchester, but in truth, his best performances came with the Gunners, a period which included two inclusions in the PFA Team of the Year.