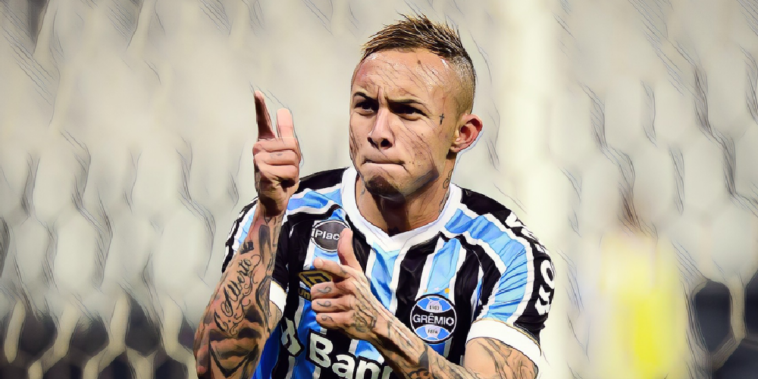 Everton Soares has revealed he has held discussions with Carlo Ancelotti and Richarlison about a potential move to Everton.

The Brazilian international has been linked with a move to the Premier League in recent windows having impressed with club side Gremio, with Everton believed to closely monitoring the progress of the forward who has scored three goals in 14 appearances for the national team.

Soares has now confirmed that informal talks had been held with both Everton boss Ancelotti and international teammate Richarlison about a switch to Goodison Park, though no offer was made during the winter window.

“He [Ancelotti] asked me how I was doing, if I was interested in playing at the club,” Soares told Globo Esporte [via Sport Witness]. “It’s a great club, a great opportunity. A great coach too, I will surely learn a lot from him.

“I have a friendship with Richarlison, I was able to play together with him. He ended up knowing about Everton’s interest and called me. I was happy, it’s a great club, a great coach too. A coach that whoever plays with him will learn a lot. I am also happy for these contacts.

“Nothing came to Grêmio, but people linked to the club sought me out, approaching, to find out about the interest. Even for bureaucratic reasons nothing got to Grêmio. It’s something that I try not to disturb myself with.

“I dream of playing in Europe, but I can’t let that anxiety get in the way. At the moment it doesn’t materialise, I’m a Grêmio player. I have to do my best here. I will always try to honour the shirt, until the last game here.”

Despite the 23-year-old’s claims though, the Liverpool Echo claim Soares is ‘not currently on Blues radar’, as Ancelotti and director of football Marcel Brands compile their list of transfer targets ahead of the summer window.

The Italian is believed to be a fan of a player who was part of Brazil’s victorious Copa America squad last summer, having monitored him during his time as Napoli boss, though no move is planned at this stage.

Yerry Mina insists Everton are ‘getting better’ under ‘approachable’ Ancelotti