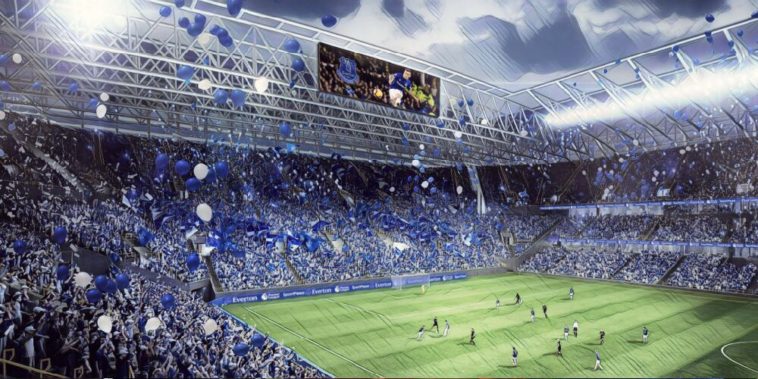 Everton’s Leighton Baines admits the plans for the club’s new £500m stadium has ‘created a buzz’ amongst the players.

Everton have revealed the designs for their proposed new 52,000-capacity stadium in the derelict Liverpool docklands, which the club are hopeful can be ready for 2023.

Baines admits the proposals have been the talk of the club’s training ground, with the ‘impressive’ designs having caused excitement within the playing group.

“We had an abbreviated version of this as a group yesterday and it created a buzz in the dressing room. It’s been the talk of Finch Farm for the last day,” Baines told fans at the unveiling of the plans on Thursday.

“We’ve all been waiting for this day, to get a glimpse of what the new stadium could look like, and it didn’t disappoint.

“The plans are very impressive and it was good to get a look at where we’re heading. It’s still conceptual at this stage but looking at what Dan and the guys have put together and hearing their plans has been really exciting.”

The new stadium will include a steep 13,000-capacity home end, whilst the installation of rail seating could pave the way for future safe standing, should legislation allow.

Everton hope the plans will help create the same intimacy as their current Goodison Park home, with the club keen to ensure they are able to recreate the infamous Goodison atmosphere.

“The designs and the planning have been done with Goodison in mind and trying to recreate as much of that atmosphere and feeling of intimacy as we can and that’s great to hear,” he added.

“The times are that you always have to keep moving and growing, whether that be as a person, a business, a football club so we’ll try to continue that and bring our own history and develop our soul at the new stadium.”

Baines signed a new one-year deal with the Merseyside club this summer, taking the veteran full-back into his 13th season with the club.

Now 34, Baines is realistic at his prospects of playing at the new ground, but says he’ll be there as a supporter nonetheless.

“It’s definitely a stretch to imagine me running out there as a player but one thing’s for sure I’ll at least be there as an Evertonian,” he added.