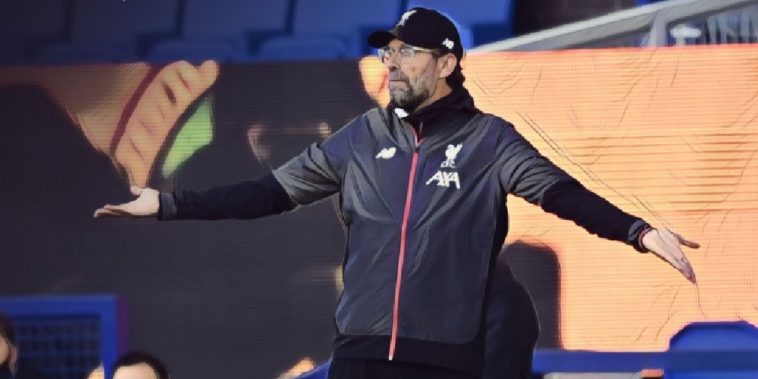 Liverpool’s inevitable march toward the title hit a slight stumbling block as they made their long-awaited footballing return in the Merseyside derby, being held 0-0 by Everton at Goodison Park.

The Reds came back to action knowing that two wins would see them lift that elusive Premier League title, though they could now be forced to wait until next month to finally get their hands on the trophy.

In fairness, the 236th Merseyside derby certainly won’t live long in the memory, Liverpool dominating possession of the ball, though the league leaders were restricted to a handful of half-chances.

In fact, it was Everton who had the best opportunities to win the game, Dominic Calvert-Lewin forcing a smart save out of Reds ‘keeper Alisson, with Tom Davies’ follow-up coming back off the post, as the hosts looked the likeliest to score as the game wore on.

Speaking afterwards, Jurgen Klopp admitted his side weren’t up to their usual imperious best, but seemed happy enough as they moved a point closer to the title.

“Both teams understand the idea of a derby,” Klopp told Sky Sports. “Each team is fighting like crazy but there is not a lot of football. Physically it was really intense. I will take that.

“It was a real fight. Both teams showed they understand it is a derby. Intense, physical, all players were all in.

“We didn’t have enough chances. Most of the time we were dominant but they had the biggest chance.

“Everton defended really well and we were not smart enough to use the space. That is normal when you start to play again.

“Football looks slightly different, but I take that.”

Liverpool are now reliant on Man City dropping points against Burnley on Monday night in order to be able to claim the title at Anfield on Wednesday against Crystal Palace, a win for Pep Guardiola’s side potentially setting up an opportunity for Klopp’s side to win the title at the Etihad when they travel to face City on July 2nd.

See also – Moments that made the Premier League: The bar is raised by Man City’s Catalan revolution