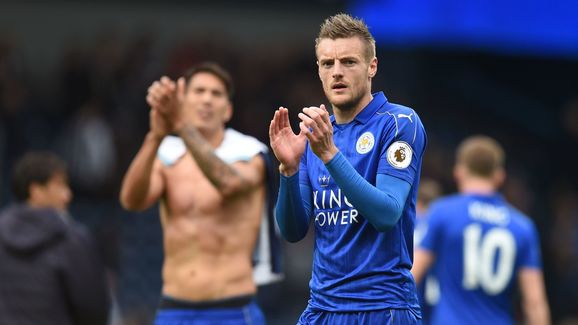 Everton have been linked with making a shock move for Leicester City striker Jamie Vardy.

This is the news in today’s Daily Express who claim that the England hitman could be a surprise replacement for Romelu Lukaku.

Lukaku has been linked with a £100m move away from Goodison Park this summer, with Chelsea and Manchester United both linked with the striker who scored 25 Premier League goals this season.

United were recently linked with making a player-plus-cash deal for Lukaku which could see Wayne Rooney heading back to Goodison Park. Rooney has also been linked with a move to China, while Jose Mourinho has claimed he is happy for the 31-year-old to remain at Goodison Park.

However with Rooney’s exorbitant wages and diminishing influence, Everton have made Leicester striker Jamie Vardy their number one transfer target.

Vardy scored 13 goals in a relegation threatened season for the Foxes, a stark contrast to the 24 Premier League goals in Leicester’s title winning season in 2016.

He had the chance to move to Arsenal last summer, but decided to remain at the King Power stadium, signing a new four-year deal worth £100,000-a-week.

Leicester also face the prospect of losing last seasons PFA Player of the Year Riyad Mahrez who has handed in a transfer request. He has been linked with a £50m move to Arsenal.