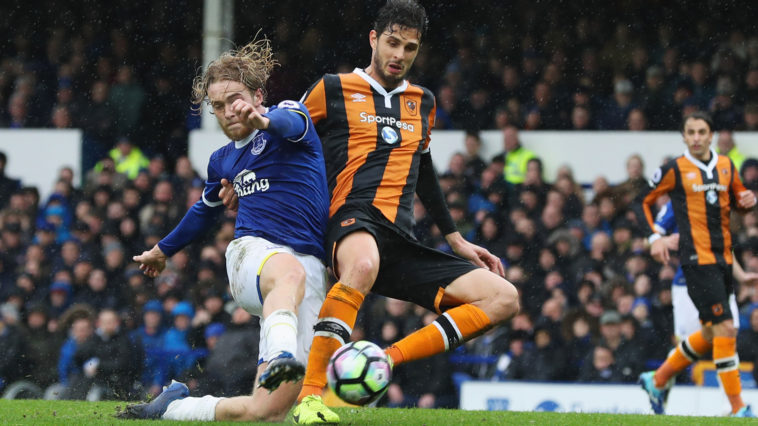 Everton moved up into fifth place level on points with Arsenal after a flattering 4-0 win against struggling Hull City.

Coming into the game Everton manager Ronald Koeman said that wins against West Brom and Hull City were vital in the team’s aim to guarantee European football for next season.

There had been much speculation and drama during the week surrounding Romelu Lukaku. The striker has been scoring for fun and there was a discussion as to whether the league’s top scorer would be dropped for the “crucial” tie but that was not the case.

It was evident that the media’s spinning of the Lukaku story did not effect the fan’s reaction towards Lukaku. In fact the Belgian got a massive reception from the Everton fans, who for the most part agree with what he said regarding bringing the club forward.

However after all this, it was another young striker who became the centre of attention inside 10 minutes. Returning Dominic Calvert-Lewin scored his first Everton goal in a great piece of play. That play involved fellow youngsters Ross Barkley and Tom Davies. Davies has the second most assists for an under 21 player in the league only behind Anthony Martial despite only coming into the team in the past few months.

After this goal it became somewhat of a strange but uneventful game. Neither side really showed what they needed and there wasn’t any real threats at either side of the pitch. The only real event of substance was the injury to Morgan Schneiderlin which may keep him out for some time. This will give Everton some big concerns given the massive fixtures coming up after the international break.

After half time this trend remained and it was actually Hull who began to dominate.  This led Ronald Koeman to introduce Funes Mori for goalscorer Calvert-Lewin in attempts to shore up the defence.

Minutes later Hull also changed their system to attack Everton as they could see they were beginning to cause problems. This pressure remained until around the 73rd minute when Hull’s Tom Huddlestone was sent off admittedly rather harshly. The decision took the fight straight out of Hull who couldn’t keep their pressure up with 10 men.

Enner Valencia was introduce during from the bench, and within 60 seconds, the game was over. A fine assist from Lukaku set up Valencia’s 3rd goal in an Everton shirt.

Not content with only an assist, Romelu Lukaku added to Hull’s misery in injury time. The roles were reversed and Valencia played a nice pass into the path of Lukaku for him to get a well deserved goal.

It wasn’t finished there though, as two minutes later Lukaku added his second. A mistake from the Hull defence, who had played well throughout the game, left Everton fans with a great sight with Lukaku showing his appreciation to them for the support he received.

All in all 4-0 was a very flattering scoreline for Everton. They played nowhere near their usual quality. If Hull would have had that extra bit of luck, they could’ve easily come back into the game.

Ultimately the story of the game and most likely the rest of the season will be Romelu Lukaku. He has become favourite for the golden boot following Harry Kane’s injury. He has also become the first Everton player to score 20 league goals in a season since Gary Lineker.

It is my opinion, and the opinion of many Evertonians, that he is irreplaceable currently and the club need to hold onto him no matter what at least for next season with European football almost guaranteed. It would be a shame if he never got a real opportunity to win a trophy with Everton after all.

Please support Football Faithful by sharing this article on social media using the icons below.

If you would like to write about either Everton or Hull, then please join our team