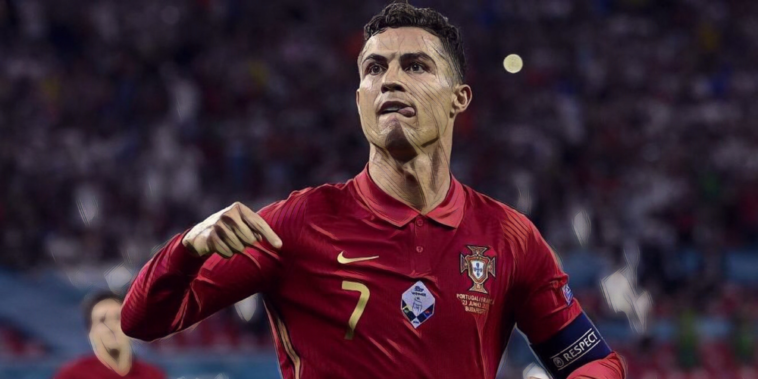 Ronaldo’s tournament has come to an end with Portugal’s defeat to Belgium at Euro 2020, the holders eliminated in the last 16 following a narrow defeat on Sunday evening.

Their elimination proved disappointing for the nation’s greatest ever player, but failed to come before the Ronaldo had written himself further into history – including levelling Iran’s Ali Daei as the highest scoring player in international football with 109 goals.

Following what was perhaps – but not probable given the extraordinary feats he continues to achieve – Ronaldo’s last European Championship, we look back at his long list of tournament landmarks.

Ronaldo entered Euro 2020 as the joint-leading scorer in the tournament’s history alongside Michel Platini, before claiming the honour outright and in some style following a prolific campaign for Portugal.

The Juventus superstar scored twice in Portugal’s opening win over Hungary, before scoring once again in defeat to Germany and a brace from the penalty spot as the spoils were shared with world champions France.

Ronaldo’s five goals in four fixtures mean he leads the race for the Golden Boot and ranks five clear of Platini as the most prolific player in European Championship history.

Far from just the relentless goalscorer he is often portrayed, no player has ever provided more assists at the Euros than Ronaldo, who has provided nine goals for his teammates.

Ronaldo registered two assists during his first ever finals appearance in 2004, whilst he finished the campaign with three as Portugal were crowned champions at Euro 2016 – the nation’s first ever major trophy.

Ronaldo’s incredible career longevity is a testament to his renown dedication and commitment to his profession, with the 36-year-old having incredibly featured in a record five European Championship tournaments.

Given each edition is every four years, it is a staggering achievement with his first coming as the fresh-faced 19-year-old helped Portugal reach the final on home soil at Euro 2004.

Some 17 years on from that maiden tournament, he remains at the very pinnacle of the European game.

Ronaldo’s longevity has also seen him feature in more finals matches than any other player, making 25 appearances across his five European Championship campaigns.

The five-time Ballon d’Or winners 25 appearances are five more than the next highest players on the list in Portugal teammates Pepe and Joao Moutinho, who have both climbed the rankings at Euro 2020.

Germany’s Bastian Schweinsteiger is fourth on 18 appearances, with Italian goalkeeping great Gianluigi Buffon one further back on 17 appearances at the Euros.

Those 25 appearances have seen Ronaldo compile an almost 50% win rate, with his 12 wins also a tournament record.

None of those victories will have been sweeter than Portugal’s 1-0 final success over France at Euro 2016 to be crowned European champions, despite Ronaldo being withdrawn in the first half through injury.

Ronaldo has scored four braces at the European Championships, including two in this summer’s competition after netting doubles against both Hungary and France.

Ronaldo also netted a brace against Hungary during the group stages at Euro 2016, including a wonderful backheeled flick, whilst a double against the Dutch in 2012 helped Portugal qualify from a difficult group that contained the Netherlands, Germany and Denmark.

No player has ever scored more than Ronaldo’s three penalties, which all came during this summer’s edition.

The introduction of VAR has perhaps seen more penalties awarded than ever before and Ronaldo took full advantage of the opportunities that came his way, dispatching three from three in clashes against Hungary and France.

Most teams scored against – 7

Ronaldo has also scored against more teams than any other player in European Championship history, netting against seven nations including heavyweights such as France, Germany and the Netherlands.

Hungary have been the Portuguese’s preferred opponents with four goals scored across just two fixtures, whilst perhaps his most crucial was a towering header against Wales in the semi-finals of Euro 2016.