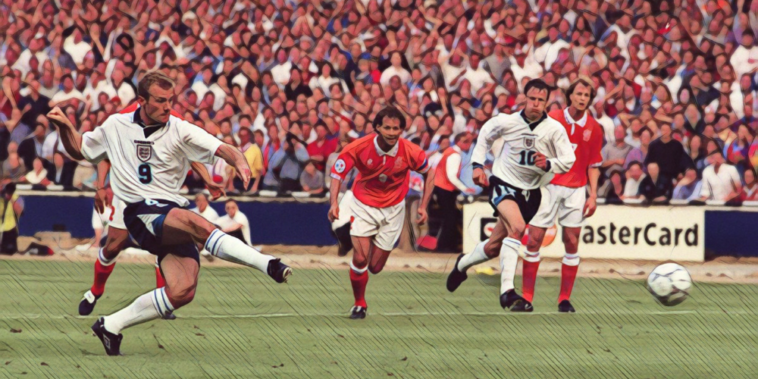 England have a long, well-documented and storied history of falling below expectations at major tournaments. So often hyped heading into finals, there have only been limited occasions in which a side has genuinely delivered.

Rarer still has there been occasions of overachievement, be it an entire tournament or single performance.

Euro ’96 was a tournament in which fans of the Three Lions dared to dream, a competition hosted on home soil and one in which the host nation gained momentum on their way to the semi-finals.

England ultimately – and quite predictably – crashed to the Germans on penalties in the last four, though the abiding memory of their venture should be a group stage clash with the Netherlands, a fixture in which it all came together for Terry Venables and his side.

Both sides entered the final group game level on points and goal difference, having each taken four points from fixtures with Switzerland and Scotland respectively.

Both were in an advantageous position to qualify, though each knew there was work to do to secure progress to the knockout stages.

The Dutch had arrived at the finals as one of the pre-tournament favourites to win the trophy, their squad consisting of a multitude of leading names and several of the talented Ajax side that had reached successive Champions League finals in the previous two campaigns.

Roared on by a raucous home crowd it was the host nation who started the better, Alan Shearer – whose goals in each of England’s opening fixtures had confined pre-tournament doubts over his place to a distant memory – seeing one effort hooked off the goal-line after a well-worked corner.

England continued to push forward, with Steve McManaman sent racing away following a long pass from Paul Ince. Lacking support as the orange shirts flooded around him, the Liverpool winger waited patiently, before rolling a pass into the onrushing Ince.

The midfielder dragged the ball into his path with his back foot, his momentum seeing him tumble over the outstretched leg of Danny Blind as a packed Wembley roared at the Austrian official, Gerd Grabher.

Grabher pointed immediately to the spot, allowing Shearer to slam home his third goal of the tournament beyond the outstretched dive of Van der Sar who guessed the right way.

The Netherlands regained a foothold in the game and controlled proceedings until the break, a youthful Seedorf operating at the base of the midfield conducting the play as England’s deep defensive line sought containment until the half-time whistle.

The pressure mounted, but England refused to wilt, even if Gareth Southgate’s mistake almost handed the Dutch a lifeline on the stroke of half-time, David Seaman’s excellent save denying Bergkamp and preserving the Three Lions’ advantage.

England ahead at the interval – though much, much more was to come after the break.

England had been the better team during the opening exchanges, but a second-half blitz would ensure their clash with the Dutch ranks amongst the nation’s greatest ever major tournament performances.

Six minutes after the restart their lead was doubled, Teddy Sheringham heading home Paul Gascoigne’s corner. Gascoigne’s floated delivery had little power upon it and Sheringham struggled to gain momentum, but the absence of a Dutch defender on the back-post saw his header drift into the far corner.

The floodgates were open and it proved the catalyst for an 11-minute spell that lives long in the memory.

In the ascendancy, England poured forward with the mercurial talents of Gascoigne in full flow, the Rangers midfielder twisting and turning beyond Dutch challenges as the Three Lions played to his beat.

It was Gascoigne’s run from midfield that led to the host nation’s third, a goal which evokes utter nostalgia of that 1996 summer whenever replayed.

Gascoigne scampers onto McManaman’s pass before backing up Danny Blind inside the penalty area, laying the ball with the outside of his boot to the lurking Sheringham on the edge of the box.

Shaping to shoot, Sheringham opens his body and allows the ball to come across him, taking out two Dutch defenders with one movement before teeing up Shearer to thunder home an England third.

England were in dreamland and Wembley erupted as the home nation capped a wonderful team goal, but moments later it was four, Sheringham reacting first to a spilled Darren Anderton effort to net his second of the afternoon.

England had boasted less possession, less shots and less corners than their counterparts, but were punishing on the break to become the first team in more than two decades to score four past the Netherlands.

The Three Lions’ ‘SAS’ partnership had dismantled the Dutch at the national stadium, a ruthless blitz having seen England race into a four-goal advantage with a little more than an hour played.

Patrick Kluivert’s goal made little difference to the euphoric atmosphere inside Wembley, even if it did secure the Netherlands’ progress at the expense of Scotland.

The closing stages saw Gascoigne come into his element, toying with his opposition with a series of crafted one-twos, rarely taking more than two touches as the Dutch struggled to get a foot in and cries of ‘olé!’ rang around Wembley.

England marched on as group winners in a summer where ‘Football’s coming home’ rang out across the nation and the optimists amongst us really dared to dream.

In truth, the Netherlands were better than a stunning scoreline suggests and had chances, whilst England were not quite the all-conquering footballing purists that decades of hazy nostaglia-impacted memories would have us believe.

It was though, a result which left an unforgettable imprint on the minds of every England fan of the mid-nineties, one that saw Terry Venables’ side ride the crest of a wave during a home tournament few can forget.