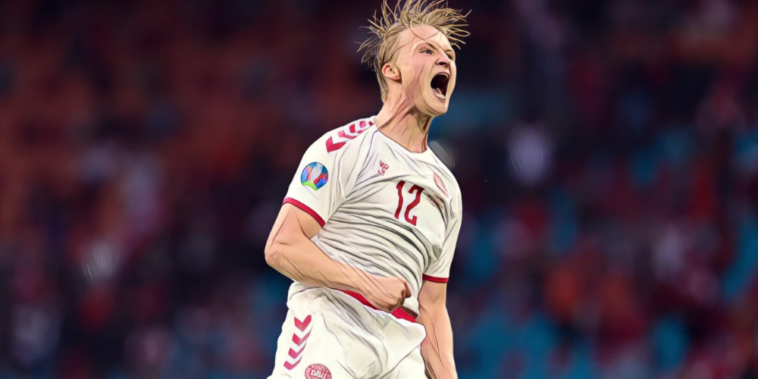 Euro 2020’s round of 16 delivered some enthralling ties with England edging Germany in a clash between the old rivals at Wembley on Tuesday.

Belgium ended Portugals reign as European champions with a 1-0 win in their heavyweight clash, whilst Switzerland upset the odds to eliminate World Cup winners France via a penalty shoot-out.

Elsewhere Spain edged Croatia in an all-time classic contest that featured eight goals and no shortage of incident, whilst the Czech Republic and Ukraine marched into the last eight with wins over the Netherlands and Sweden respectively.

Jordan Pickford may not have always convinced in an Everton shirt, but the goalkeeper is one of a rare breed of players who raise their standards when representing England.

Pickford was outstanding as the Three Lions beat Germany 2-0 at Wembley, making a smart save to deny Timo Werner with the game goalless, before turning a fierce Kai Havertz effort over the crossbar.

The 27-year-old silenced doubts over his temperament and presence with a commanding and confident performance, relieving pressure from his backline in arguably his best performance of the tournament to date.

Recalled to the Spain squad after a two-and-a-half year absence, Cesar Azpilicueta demonstrated his value to Luis Enrique as La Roja overcame a rollercoaster ride to progress past Croatia.

The 31-year-old showed admirable leadership qualities after Spain were rocked by a comical own goal to fall behind, before netting his first international goal with a powerful header to put the Spanish ahead.

He remained calm despite the chaos of a contest that featured eight goals and a late Croatian fightback, his winning experience vital as Spain came through a tough challenge to reach the last eight.

Kalas did well to marshal a dangerous Dutch attack as the Czech Republic caused an upset to reach the quarter-finals, standing strong alongside centre-back partner Ondrej Celustka to deal with the lively Memphis Depay and Donyell Malen.

The Bristol City defender was a threat in both boxes and proved vital in the game’s opening goal, rising at the back post to head across for Tomas Holes to put the Czechs ahead.

Gareth Southgate’s faith in Harry Maguire has been vindicated with the defender heading into this summer’s tournament as an injury doubt, his return to the side having shown why the Manchester United captain is crucial to England’s chances.

Starting on the left-side of a back three system, Maguire stepped forward confidently in possession and was an imposing aerial presence – even if he should have done better with the attacking opportunities that came his way.

Maguire is a captain without an armband and will be crucial to the Three Lions’ hopes of reaching the final, the centre-back improving with each performance after making his recovery from an ankle injury.

Ukraine will meet England in the quarter-finals in Rome this weekend, their passage secured following a dramatic late extra-time win against Sweden.

Andriy Shevchenko’s side were reliant on one of their leading lights for two moments of genuine quality, with Manchester City wing-back Zinchenko involved in both goals during their 2-1 success.

Oleksandr Zinchenko has made more tackles (15) than any other player at the 2020 European Championships so far.

Zinchenko opened the scoring after arriving at the far post to fire home, before providing a wonderful left-wing cross for Artem Dovbyk to head home a 121st-minute winner as penalties edged closer.

Tireless and tenacious in the Czech Republic midfield, Holes protected his backline superbly with a strong performance, before influencing the game further forward after being provided a licence to attack following Matthijs de Ligt’s sending off.

Holes opened the scoring with a header after finding himself in the right place to covert Tomas Kalas’ header across goal, before winning possession and driving forward to tee up Patrik Schick for the second.

His drive and dogged defensive work were crucial to the Czech Republic securing a 2-0 win and progress, with Jaroslav Silhavy’s side now eyeing another upset against in-form Denmark in the last eight.

A reminder of what Xhaka can bring to a side when at his best, the Switzerland midfielder was key to his side’s success against a France midfield containing Paul Pogba and N’Golo Kante.

Xhaka worked hard shut down the duo and showcased his passing range throughout, completing 92% of his passes, including a fine assist into substitute Mario Gavranovic for the dramatic late equaliser.

The 28-year-old has often struggled to convince at Arsenal, but remains crucial to Switzerland and gave an outstanding captain’s performance in the shock of the tournament so far.

France may be watching the rest of the tournament from the comfort of their sofas after a shock loss to the Swiss, but Paul Pogba’s performance warrants inclusion in our best XI of the round of 16.

Pogba has shown a level of performance at Euro 2020 not seen on too many occasions at Manchester United, with the midfielder’s performances for Les Bleus largely outstanding including a strong showing against Switzerland.

The 28-year-old’s sensational goal and emphatic penalty were highlights of a midfield showing in which he exerted a touch of class, one extra-time pass into Marcus Thuram drawing gasps from the crowd as he sliced across the ball to provide the perfect weight and spin.

Paul Pogba's game by numbers for #FRA vs. #SUI:

A dazzling display for his country. pic.twitter.com/fEP63Le98T

Ferran Torres just loves representing his country and continued his rich vein of form for Spain, taking his tally to six goals in his past seven starts after returning to the XI for the win over Croatia.

The Manchester City winger’s creativity and energy brought a new dimension to La Roja’s attack, with Torres involved throughout as he crossed for Cesar Azpiliceta’s goal before scoring the third himself.

Torres adds a different option for Spain with neither Alvaro Morata or Gerard Moreno having truly convinced in the tournament to date, the youngster’s brilliant movement and finishing ability set to play a major role in their knockout stage campaign.

England’s go-to man was the hero once again after opening the scoring against Germany, Raheem Sterling having enjoyed a Euro 2020 to remember so far after pre-tournament doubts over his place in the side.

Sterling has scored three times in four appearances and took his goal against Germany expertly, driving forward in possession before bursting into the box to tap home Luke Shaw’s cross from wide.

Sterling’s movement – both with and without the ball – stretches defences and provides England with a constant outlet, whilst his knack of finding himself in the right place at the right time has become a welcome one for Gareth Southgate’s side.

England’s bright spark in the tournament so far, Sterling has helped reignite belief that the Three Lions can reach the latter stages.

The clinical edge at the top of the Denmark team, Kasper Dolberg seized his opportunity after being called into the starting side following Yussuf Poulsen’s injury.

Dolberg opened the scoring against Wales with a superb finish, linking well with Mikkel Darmsgaard before stepping inside and bending an effort beyond Danny Ward and into the far post.

Having began his club career at Ajax the forward seemed right at home at the Johan Cruyff Arena, testing Ward once again before netting his second after capitalising on a horrific mistake from Neco Williams.

Dolberg’s double set Denmark on their way to a 4-0 win and comfortable passage to the last eight, a nation with huge momentum behind them set for a quarter-final date with the Czech Republic.