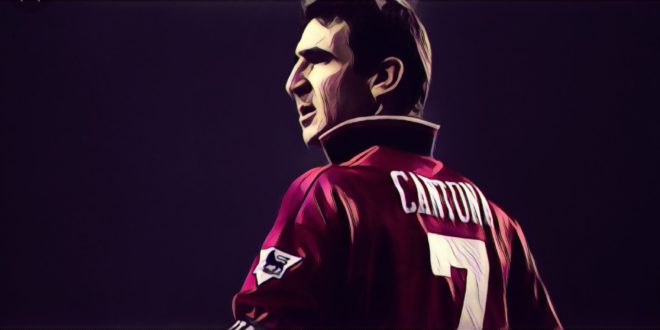 The mesmerising Frenchman is fondly remembered in the red half of Manchester as the man who launched an era of Premier League dominance. It is safe to say that without Cantona, Manchester United would not be the club they are today.

In 1992, Manchester United were not the footballing behemoth they became during the Premier League era. With no league titles since the halcyon days of Sir Matt Busby, the historic club lived off past glories, interspersed with rays of hope, usually through an FA Cup run or a second-place league finish.

The appointment of Alex Ferguson was made with the idea of disrupting the Merseyside hegemony of the league title in the 1980s. The first six seasons of his reign showed little indication of what was to come. The odd successful Cup run was still there, but as was their forte at the time, United bounced between also-rans in the title race and mid-table mediocrity.

That something was Eric Cantona.

On November 26th, 1992, United sat eighth in the league, having collapsed horrendously at the end of the previous season, with three defeats in six days dashing their hopes of a first league title in 25 years. United were booed off after a 1-0 loss to Wimbledon, already eliminated from the UEFA Cup, and their new striker, Dion Dublin, had suffered a broken leg.

Ferguson decided that another striker was needed. That striker was David Hirst. If Ferguson had gotten his way initially, Hirst would have become the most expensive player in British football. Sheffield Wednesday, however, rejected United’s advances.

United were forced to look elsewhere, until Leeds United chief executive Bill Fotherby called up United to enquire about the availability of left-back Dennis Irwin. Ferguson refused the offer, but asked if Cantona was available. Within a few days, Cantona was a United player.

Cantona’s career in France was a series of highs and lows. His talent was unquestionable, winning a league title, and being capped for France in his early twenties, but his temperament often landed him in hot water. Fights with teammates, bans, throwing balls at referees, more bans, insulting coaches on national television, and even more bans were just the tip of the iceberg.

He was widely considered to be unemployable, despite his immense talent, and the support of teammates of the ilk of Laurent Blanc and Carlos Valderrama. Amidst all the controversy, Cantona announced his retirement from football in 1991. France’s national team coach, Michel Platini, convinced Cantona to return, and under the advice of a psychoanalyst, he looked to restart his career across the English Channel.

After being offered to Liverpool, and going on trial with Sheffield Wednesday, the Frenchman joined Leeds United, helping them to the title. He started the first ever Premier League season in fine form, scoring six goals in thirteen games, before United came calling.

From the moment he stepped out onto the pitch at Old Trafford, it felt like Cantona had finally come home. The king had found his subjects, and they flocked to the stadium by the thousands to pay homage and see him inspire United to a first league title since 1967. The impudence and arrogance with which the Frenchman carried himself, backed up by his technical brilliance, filled Ferguson’s squad with the one key ingredient they lacked in seasons past: confidence.

Gone was the collapse of the previous year. Cantona had banished those memories as he glided around the pitch, collar upturned, and United, as a result were poised to capitalise on the new riches and worldwide scope available as a result of the fledgling Premier League. Cantona set them on an upward trajectory for years to come.

The temperament issues were not gone, though. In his second season, Cantona found himself falling afoul of the law once more, picking up a five game ban for successive red cards. In true Cantona fashion, he did not let this stop him from finishing as United’s top scorer of the season, as the club won a league and cup double.

Cantona played as he always did, fiery, uncontrollable, just as likely to brutally slide into an opponent, as he was to feather a delicate pass out to the wings for Giggs or Andrei Kanchelskis. Ferguson, unlike other managers, had been able to harness this fire within Cantona.

He gave him preferential treatment, but not once did the other players in the squad question it. They knew that Cantona was their talisman, and whatever Ferguson was doing was for the betterment of the team. They bought into Cantona and he repaid them in spades. But the fire could only stay contained for so long.

His third season at United was going smoothly, with the side on course for a third consecutive league title, when everything was derailed by a moment of madness at Selhurst Park in January 1994. Cantona, having been sent off, was trudging back to the dressing room, when a Palace fan ran down to the barricade by the pitch, hurling obscenities towards the Frenchman. In a flash, Cantona had launched himself at the abuser, landing a “kung-fu kick” and a few punches on him before security managed to pull him away.

The punishment that followed was swift and severe. In accordance with the FA’s wishes, United had to fine Cantona, and ban him for the rest of the season. The FA extended the ban to October of that year. When Cantona was forced to face the media, all he uttered before leaving the room was that famous line: “when the seagulls follow the trawler, it’s because they believe the sardines will be thrown into the sea”. Both his and United’s lawyers could only look on, flabbergasted.

There were calls for him to be ostracised and deported back to France, and he very nearly left United for Internazionale, but Ferguson managed to convince the striker to stay put. It was a low point for Cantona, as he was stripped of the French national team captaincy. He would never play for his country again. Many viewed this as the end of Cantona, a man who had been overcome by his demons.

There were also whispers that it could be the end of United’s short period of dominance, as without their leader, the side faltered in both the league and the FA Cup. At the end of the season, United sold three of their star players: Mark Hughes, Andrei Kanchelskis and Paul Ince. To many, this was Ferguson throwing in the towel before the new season had even started. As the manager replaced the stars with youth academy products, Alan Hansen uttered the famous line at the start of the 1995-96 season: “you’ll win nothing with kids”.

Return of the King

History may have proven Hansen wrong, but it might not have done so had it not been for the return of Cantona. Fittingly, in his first game back, United played their arch-rivals, Liverpool. Cantona notched a goal and an assist, as United came from behind to steal a draw. The kids were proving to be pretty good, but they were in need of a leader. Cantona was the man to steady the nerves, to guide the likes of Paul Scholes, Gary Neville, Nicky Butt and David Beckham through games at the highest level.

Most shockingly of all, the Cantona that returned from the ban had replaced the rage and fire with ice in his veins. The Frenchman only picked up one yellow card throughout the entire season, a stunning turnaround from the hot-headedness that had come to be expected of him.

With 14 goals and 10 assists, including a series of winners and equalisers in the second half of the season, he guided the young team to another double, and was named as captain for the following season. He sealed another league title the following season, scoring 11 goals, notching 12 assists, and only picking up five yellow cards.

Then, as suddenly as he had arrived on the scene in England, he was gone. Cantona retired at the end of the 1996-97 season, aged just 30. When the fire burnt out, he could only keep going for so long.

United and Cantona were a match made in heaven. He was one of Ferguson’s on-field generals, and is one of the defining players of the Scot’s long, storied tenure in charge of the club. Chest puffed out, strutting around Old Trafford, Cantona was the first marketable player of the Premier League era, and his prominence was matched only by his ability. These two combined launched United into the stratosphere, both on and off the pitch.

The “kids” he captained formed the core of United’s treble winning side in 1999. Each one of them speaks of Cantona with a reverence and sense of awe usually reserved for deities. Cantona’s larger than life personality, projected by Sky’s cameras across the world, laid the groundwork for players like Zlatan Ibrahimovic today.

True to his later career as an actor, Cantona knew how to play to the cameras and the media. He knew his place on the stage of the pantomime that is the Premier League, his spot as both a hero that others aspired to be like, and a villain, violent and vilified. In the end, he was the French rebel who became the King of Manchester, and laid the foundation for one of the greatest dynasties in football history.

TO CHECK OUT 15 OF THE BEST CANTONA QUOTES CLICK HERE !