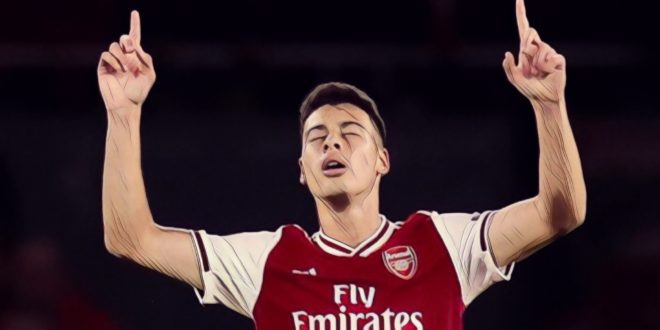 Arsenal made it two wins from two in the Europa League group stages, thrashing Standard Liege 4-0 tonight at the Emirates.

£6 million summer signing Gabriel Martinelli will be the man on every Arsenal fans lips, with the 18-year-old striker following up his brace against Nottingham Forest in the Carabao Cup, with two razor-sharp finishes within the opening 16 minutes.

Fellow youngster Joe Willock then netted to put the tie to bed in the 22nd minute, leaving the Belgian side and their travelling support shell-shocked.

Young Brazilian Martinelli then turned provider to set up midfielder Dani Ceballos for his first goal for the Gunners, to seal what was a hugely positive night for Unai Emery’s young side.

One sublime performance from the 18-year old. pic.twitter.com/4D09JIBNyQ

Speaking after the game Arsenal boss Unai Emery admitted his side will take confidence from tonight’s win and praised his sides young players for grasping their chance to impress.

”To have six points after the two matches, it’s really important. We can take confidence,” Emery told BT Sport.

”We were consistent over the 90 minutes and we can take a lot of positivity from tonight’s game. The players, when they did all they can like tonight, it is perfect. We did a lot of good, we can analyse to continue to improve. It’s a fantastic victory.”

“We played with intensity but then we conceded some possession but we kept the clean sheet. We can improve in how to keep the ball and make more chances but for the players today, they are very tired after playing on Monday and they still played fantastic, it’s a fantastic victory.”

“We have to give the chances to the young players and they take them. They are close to playing for us at the highest levels. They showed tonight that they can perform and they can score. They are playing well, it’s good.”