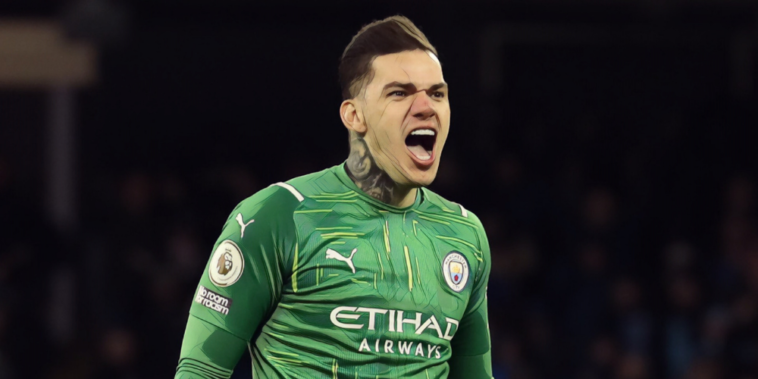 Ederson says Manchester City are ‘fully capable’ of winning the treble this season and has hailed Pep Guardiola.

City face Sporting Lisbon in the second leg of their Champions League last-16 tie on Wednesday, with the Premier League champions boasting a 5-0 aggregate lead from the first meeting in Portugal.

Guardiola’s side are also six points clear at the top of the Premier League – albeit having played a game more than Liverpool – after thrashing Manchester United 4-1 on Sunday, whilst the club will take on Southampton in the FA Cup quarter-finals later this month.

Ederson says his side are hoping to win every remaining competition this season, including a first Champions League after finishing as runners-up in 2021.

“Our goal is to win every competition we go into, this is no different,” Ederson said at the club’s pre-match press conference.

“We need to take it step-by-step. There are challenges in every competition we play in.”

Ederson emphasised his belief that City can win the treble this season, insisting the squad are ‘fully capable’ of winning three trophies.

“Definitely – we know how difficult it is. A season here in England is very intense when there’s a lot of demand. We have the quality to do this and I think we’re fully capable of meeting that.”

The Brazil international also reserved praise for Pep Guardiola, hailing the manager’s methods and discussing the respect the Spaniard commands in the dressing room.

“He guides and advises both young and experienced players,” he said.

“At certain times some players may be relaxed a little bit, so he tells players to be focused for 90 minutes and always look for another goal – that’s why he has a position of leadership and respect in the team.”

City’s dominance has often left Ederson with little to do in goal, with Manchester United having failed to register a single effort on goal during the second half of Sunday’s defeat to their rivals at the Etihad.

The 28-year-old discussed his need to remain focused and says the mental strain of keeping concentration can outweigh physical fatigue.

“It is difficult to concentrate when I don’t see much of the ball,” he said.

“I constantly communicate with team-mates. Even in a game when I don’t make many saves, I am tired mentally – the mental tiredness is more tiring than physical!”

Read – Key Men: Five players to watch out for in the Champions League this week