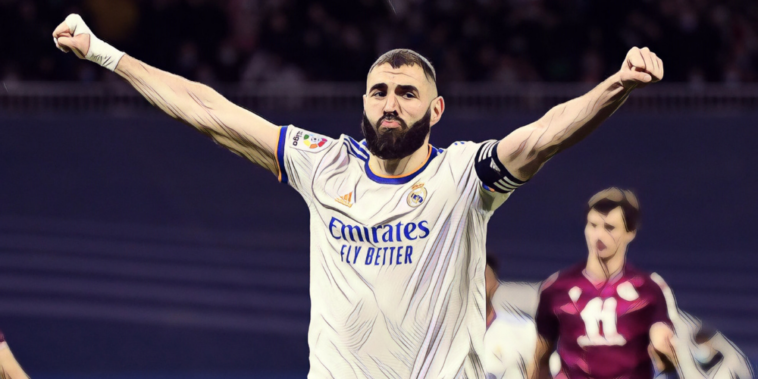 The UEFA Champions League returns this week with the second legs of the last-16 ties, the likes of Liverpool, Manchester City, Real Madrid and Bayern Munich all in action.

City head into the second leg of their tie with Sporting Lisbon as overwhelming favourites after a 5-0 win in Portugal, whilst Liverpool are also in control and with a two-goal advantage as Inter Milan visit Anfield.

Elsewhere Bayern Munich have work to do after being held at Red Bull Salzburg, whilst PSG protect a narrow lead as they travel to face Real Madrid at the Bernabeu.

Ahead of this week’s Champions League action we’ve picked out five key players to watch out for.

Luis Diaz has made an instant impression since his arrival at Liverpool from Porto in January, with the winter window signing having lifted the Reds in recent weeks.

The signing of Diaz has added new depth to Jurgen Klopp’s options and the Colombian’s early performances are making it increasingly difficult to leave him out of the side, with captain Jordan Henderson full of praise for the forward following Saturday’s 1-0 win over West Ham.

“He was immense in the [Carabao Cup] final and again today brilliant. He’s fit straight in, pressing and winning the ball high up the pitch.”

Diaz’s relentless running and willingness to work defenders has quickly endeared him to the Reds fans and the 25-year-old will be relishing his first Champions League appearance for his new side under the Anfield lights.

His introduction off the bench helped Liverpool regain momentum after coming under pressure against Inter Milan at the San Siro and Klopp faces a selection dilemma over his front three on Tuesday evening.

Sadio Mane has responded to Diaz’s arrival with five goals in his past five games, whilst the form of both Mohamed Salah and Diogo Jota this season – alongside Roberto Firmino’s return to training – leaves Klopp’s with a welcome headache.

Robert Lewandowski commands most of the headlines whenever Bayern Munich are in action, with the Poland international having scored nine goals from seven fixtures in this season’s Champions League.

Bayern left it late to rescue a result against Red Bull Salzburg in the first leg of their last-16 tie, as Kingsley Coman’s equaliser secured a 1-1 draw ahead of the return in Munich.

Julian Nagelsmann’s side dominated possession and had 22 efforts on goal, but struggled to find a way through the Salzburg resistance for much of the clash.

Most assists in Europe’s top five leagues across the last three seasons:

One of the all-time greats. 🇩🇪🎩 pic.twitter.com/0zJlDDMT4T

Thomas Muller’s performance could be key to the Bundesliga champion’s hopes in the return, with the 32-year-old remaining one of the most effective creators in European football.

Muller has provided 15+ league assists in each of the last three seasons, including 16 from just 24 appearances for Bayern this season.

His ability to carve out opportunities could be crucial to unlocking Lewandowski and securing Bayern’s progress to the last eight.

Kylian Mbappe’s future was the major talking point ahead of Paris Saint-Germain’s first leg clash with Real Madrid, a contest between the forward’s current club and his Spanish suitors.

The France international delivered despite the scrutiny on his performance, scoring a brilliant 94th-minute winner to hand PSG a precious advantage ahead of the return at the Bernabeu.

The goal was a deserved moment for PSG’s domination of the first encounter between the sides, the Parisians on the front foot and well worth their 1-0 win in the French capital.

PSG will hope Mbappe has recovered sufficiently from a training ground injury after Idrissa Gueye accidentally injured the forward’s foot this week.

Mbappe, throughout, was PSG’s biggest threat and the electricity of his movement and footwork caused endless problems for Real Madrid and the overwhelmed Dani Carvajal.

The fact that Real Madrid need to claw back a deficit could suit PSG and Mbappe, whose pace on the break will create hesitancy among the Spanish side’s defenders.

Having produced outstanding performances in wins at Barcelona and Bayern Munich in last season’s competition, another stand-out showing at one of European football’s great venues would continue Mbappe’s rise towards a status as the world’s finest footballer.

Real Madrid failed to register a single shot on target during defeat to Paris Saint-Germain last month, a statistic that will need to change if the record 13-time winners are to overturn a 1-0 deficit.

As ever, Karim Benzema will be crucial to the Spanish side’s hopes and the veteran forward has returned from a recent hamstring injury in fine form, scoring three goals and providing three assists across his past three La Liga appearances.

Benzema remains a brilliant footballer and leads in Spain for both goals and assists this season, the France international some seven goals clear of a quartet of chasers in the race to secure the Pichichi Trophy.

At the age of 34 he has found the finest form of his career and a brace against PSG would see Benzema move level with Alfredo Di Stefano on 308 goals for Real Madrid. Just two players – Raul (323) and Cristiano Ronaldo (451) – have ever scored more for the club.

Vinicius Junior, who has enjoyed a breakout season to rank behind only Benzema for La Liga goals, will also have a major role to play and his understanding with Frenchman has seen the duo directly combine for seven goals this season.

Jack Grealish’s performances have come in for criticism since his record-breaking £100m move last summer, but the weekend saw the Manchester City midfielder provide a reminder of his brilliance.

Grealish produced arguably his best performances for the club to date in their 4-1 thrashing of Manchester United, providing Pep Guardiola’s side with the dynamism, drive, and intelligent attacking football that became his hallmark at Aston Villa.

It has taken time for Grealish to adapt at the Etihad, having transitioned from the leading light of the Aston Villa side to a member of an all-star supporting cast with the Premier League champions.

MY TEAM! 💙 Manchester is blue! 💙 pic.twitter.com/uLIRktaQJJ

His derby display was an encouraging sign, however, and the 26-year-old will hope to build on that performance in what is virtually a free-hit against Sporting Lisbon on Wednesday evening.

City are 5-0 up from the first leg in Portugal and the almost dead-rubber offers Grealish a perfect chance to continue his integration into Guardiola’s system and style.