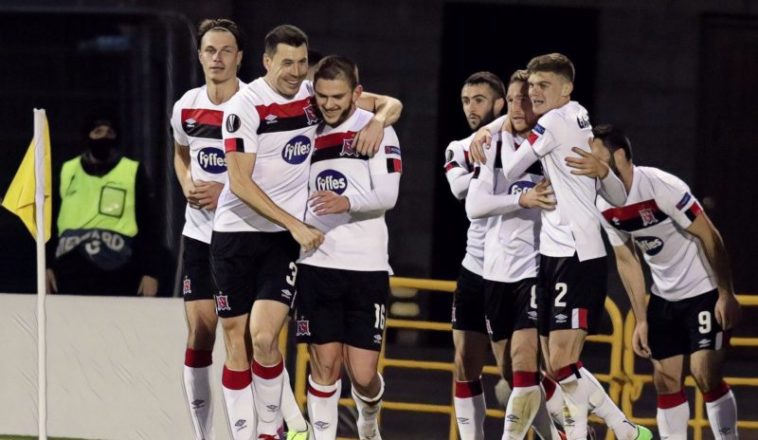 Dundalk boss Filippo Giovagnoli is hoping to spring an ‘upset’ against Arsenal as the Irish minnows prepare for a ‘historic’ Europa League clash against the north London side.

Dundalk – who have won five of the past seven League of Ireland titles – have reached the group stages of the competition for the first time in four years, where they have been handed a glamour tie against an Arsenal side amongst the favourites to lift the trophy.

It is the first time that the Gunners will have faced League of Ireland opposition and represents a huge contest for Dundalk, with novice manager Giovagnoli relishing the opportunity to test himself against illustrious opponents.

The Italian arrived at the club in a surprise appointment earlier this year, a coach with no previous senior experience and whose résumé consisted of working in youth development.

However, Giovagnoli has made a fine start to life in management in the seemingly unlikely destination of Dundalk, and has spoken of his excitement at a ‘historic moment’ for the club as they bid to complete a Europa League giant-killing this evening.

“This is a historic moment for the club, the town and the entire nation,” he told the Mail. “The whole world is going to look at this small team from Ireland playing against a giant.

“It is a big opportunity for the players to be seen in a football theatre and for me and [assistant manager] Giuseppe [Rossi] to be there, coaching against Arsenal. We were hoping to play a big team and Arsenal came.”

Dundalk opened their European group stage campaign with a narrow 2-1 loss against Molde, taking the lead before succumbing to a fightback from the Norwegians.

Mikel Arteta and Arsenal certainly represent a step up in quality, but Giovagnoli insists his side are ready to ‘compete’ ahead of their trip to the Emirates.

“We are looking to be competitive,” says Giovagnoli. “It’s a tough group. But we want to compete. Why not? Maybe we can upset somebody.”

Read – Who are Dundalk FC? Arsenal’s Irish opponents in the Europa League explained