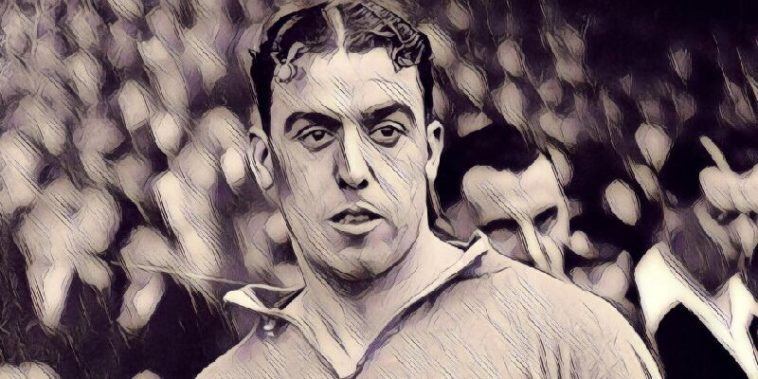 Football fans around the world may well have heard of Dixie Dean but for many, that’s as far as it goes. Dean is one of those historic figures from the bygone days of football that we are aware of, but often know next to nothing about.

Even at Everton, the club to which he is so inextricably linked, some modern fans might only know him by the burly statue that stands in front of Goodison. He was a legend, a local hero and a player fans of clubs around the world should recognise.

These days it seems as though elite footballers fall into two physical categories, light and nimble, like Messi, Sterling and Neymar or muscle bound colossuses like Ronaldo, Bale or Zlatan. Even players like Frank Lampard or Wayne Rooney, so often labelled as “fat” can reveal a six pack under their shirts but when we think of players from the past we imagine men who were a bit more like ourselves.

“He belongs to the company of the supremely great, like Beethoven, Shakespeare and Rembrandt.” – Bill Shankly

Normal blokes of average size and build who just happened to be great footballers. Dean was a modern player in an age of cotton shirts and big shorts pulled up to the nipples. He was huge, with a muscular frame developed through a childhood working on a farm and an adolescence working as a fitter for the railway. He worked nights so that he could have his days free to play football for his local side Pensby United and it was there that he attracted the attention of Tranmere Rovers.

In thirty games for Tranmere, Dean scored twenty seven goals which earned him a lot of interest from some of the top clubs in the country including Arsenal and Newcastle United but there was only one team that he wanted to play for, Everton FC.

In 1925 Dixie Dean made his dream move to Everton and immediately made an impact, scoring thirty two goals in his first full season at the club. But soon after disaster struck. He was involved in a motorcycle accident that left him with a fractured skull and jaw.

There were doubts as to wether or not he would ever play the game again. But Dean was made of stern stuff. This was a player who once, and this is true, lost a testicle while playing in a game for Tranmere. In his first game back for Everton, he scored. It was a header. In fact this was where the vast majority of his goals came from and my God, there were so many goals.

In the 1927/28 season he found the net a record 60 times! Sixty goals in a single season! We shake our head with wonder at the numbers Messi and Ronaldo score nowadays, thirty goals a season was the benchmark of a hero in the 90’s, but Dean, as mentioned, was a man before his time.

His goals, unsurprisingly, led the Toffees to the First Division Title that year and though they were relegated in 1930 his goalscoring saw them return immediately as Second Division Champions. Everton continued their winning run with another Championship in 1931 and an FA Cup win in 1932, Dean, of course, scored in the final.

Throughout a glittering career at Everton Dixie Dean scored an incredible 349 goals in 399 appearances, including 37 hat-tricks. He wasn’t bad for England either, scoring 18 goals in 16 games, (they didn’t have so many international matches at the time). Perhaps even more amazingly, given the physical nature of the game, Dean was never even booked in a career that lasted almost 20 years.

The fitting inscription below his statue at Goodison reads, “Footballer, Gentleman, Evertonian”. It’s only right that Evertonians should hold him such high regard but football fans the world over should never forget the impact he had on the game. When they speak of the greats, Matthews, Pele, Eusebeo, Best, they should always remember Dixie Dean.