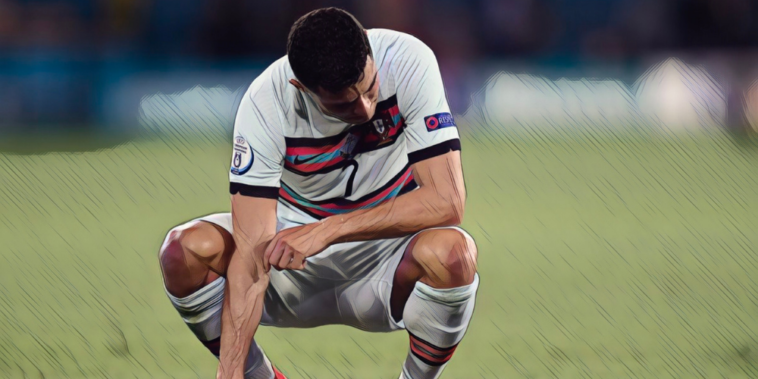 Portugal are out of Euro 2020 after losing a narrow last-16 tie to Belgium last weekend, the holders quest to defend the trophy ending in the first knockout round.

The early exit of Cristiano Ronaldo and co may surprise some, but continues a recent history of the defending champions struggling to replicate their previous performance at the European Championship.

Here is the disappointing record of the reigning European champions at each Euros since 1984.

West Germany had reached the final in each of the previous three European Championship finals, winning the trophy in both 1972 and 1980 before disappointing group stage exit at Euro 1984.

The Germans had also reached the final of the World Cup two years earlier and were on the brink of qualification to the semi-finals, following a goalless draw with Portugal and win against Romania.

Their final fixture was heading towards another scoreless stalemate with Spain and progress, until Antonio Maceda’s dramatic 90th-minute goal earned La Roja three points and progress at the holder’s expense.

France claimed the 1984 trophy after winning a maiden major tournament on home soil, Michel Platini the star of the show after scoring a record-breaking nine goals in just five appearances.

Les Bleus finished third at the World Cup two years later, but endured a torrid qualification period before Euro ’88, incredibly winning just one of eight fixtures to finish third in the group behind both the Soviet Union and East Germany.

It marked the start of an indifferent period for France, who qualified for one of just four major tournaments staged between 1988 and 1994.

Amongst the most respectable defences by European Championship champions, the Netherlands reached the last four in 1992 – four years after Marco van Basten had inspired the Dutch to a first major trophy.

Their defence was ended following a penalty shoot-out loss to underdogs Denmark in the semi-finals, who later upset the odds to beat Germany in the final.

Van Basten – who won the tournament’s Golden Boot during their victorious ’88 success, saw his spot-kick saved by Peter Schmeichel as the Dutch crashed out.

The Danes progressed and were crowned as the continent’s finest in shock fashion, despite only being admitted entry to the tournament following Yugoslavia’s expulsion.

Denmark drew 0-0 with Portugal in their opening fixture, before being thrashed by Croatia in their second fixture. A comprehensive win over Turkey restored pride, but was not enough to seal progress as the Danes bowed out in the group stage.

Euro 2000 promoted a mass rethink and restructure from the German Football Association, following Die Mannschaft’s woeful defence of the trophy in the Netherlands and Belgium.

Germany were drawn in the Group of Death alongside Portugal, England and Romania, though failed to pick up a single win as they finished bottom of the group with just a single point.

France were the premier international team in world football at the turn of the millennium, following their 1998 World Cup success with victory at the 2000 European Championship.

📅 #OTD in 2004, Greece beat holders France to secure their place in the EURO semi-finals 👏

How did you react to to this game? 🤯@EthnikiOmada | #EURO2020 pic.twitter.com/msChkbhUFC

France progressed from a group containing England as winners, though found themselves stunned by surprise package Greece in the quarter-finals, who edged a 1-0 win before becoming champions in shock fashion.

Greece’s victorious Euro 2004 campaign ranks as the biggest shock in the tournament’s history, having begun the competition as rank outsiders and without as much as a win in just two previous finals appearances.

The holders failed to upset the established order once again four years later, losing all three group stage fixtures to exit without a single point.

Spain became the first team in European Championship history to defend the trophy in 2012, following their 2008 triumph with a second successive success in Poland and Ukraine.

La Roja failed to conceded a single goal after their opening fixture and thrashed Italy 4-0 in the final, sealing a third consecutive major tournament triumph after also winning the World Cup in 2010.

Spain’s all-conquering side remains perhaps the greatest international team the game has seen.

Spain’s quest for a third European Championship in a row began positively at Euro 2016, victories over the Czech Republic and Turkey securing qualification to the knockout rounds with a game to spare.

Defeat to Croatia in that final fixture saw La Roja overhauled by their opponents however, leaving Spain facing a difficult last-16 tie against Italy in Saint-Denis.

Portugal are the latest champions to see their defence ended early in the competition, having been beaten 1-0 by Belgium in the last-16 on Sunday.

Fernando Santos’ side claimed a first ever major trophy after winning Euro 2016, but failed to repeat those exploits this summer.

Thorgan Hazard’s fine strike saw Belgium progress at Portugal’s expense, with the latter having been drawn to face the world’s number-one ranked nation after finishing third in the tournament’s ‘Group of Death’ behind both France and Germany.

Cristiano Ronaldo did his utmost to inspire Portugal’s charge with a tournament-leading five goals, becoming the record goalscorer in European Championship history in the process.

However, a talented side ultimately fell short and will be watching the rest of Euro 2020 from home as a new champion emerges in the latter stages.