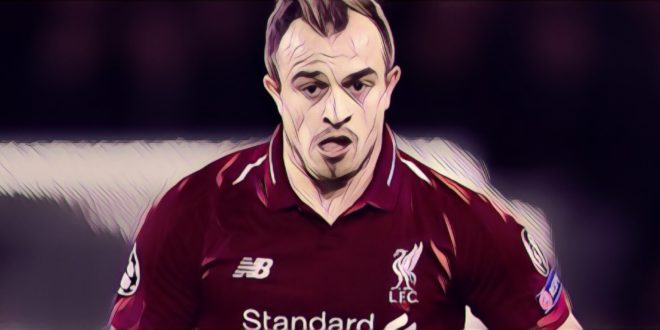 ‘Disappointed’ Shaqiri looking for ‘a solution’ to lack of Liverpool opportunities

Xherdan Shaqiri has admitted that he is looking to ‘find a solution’ to his lack of opportunities at Liverpool.

The Switzerland international joined Liverpool last summer in a £14 million move from Stoke City, where it was always expected that he would become a squad player in Jurgen Klopp’s side.

He did make 30 appearances in all competitions, winning a second Champions League winners medal along the way, but was restricted to just 11 Premier League starts during his debut campaign at Anfield, and seemed to gradually fall further down the pecking order as last season wore on.

With the European transfer window open until September 2nd, there have been suggestions that he could still leave the club this summer, and the 27-year-old has admitted he is ‘disappointed’ at his lack of chances and is keen to find a ‘solution’.

“I’m disappointed that I did not play anymore,” Shaqiri told Langenthaler Tagblatt.

“Nobody likes to sit on the bench. It’s clear that I want more time. I have to look at the situation and find a solution.”

He has been linked with moves to France and Turkey, with Galatasaray and Monaco said to be interested, although he insisted he hasn’t received any offers as of yet.

“I have no idea where this came from. I do not know about these offers,” he added.

Klopp: Liverpool have to improve defensively