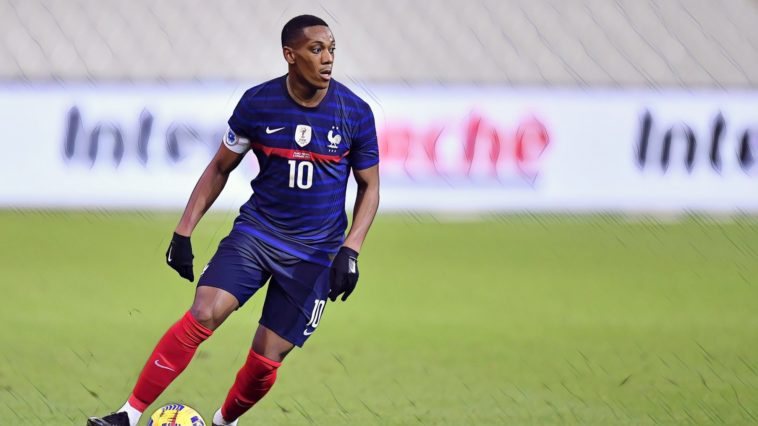 Didier Deschamps has praised the new-found ‘maturity’ and determination in Anthony Martial’s game following the forward’s return to the international fold with France.

Martial has recently forced his way back into the national side after previously struggling to convince Deschamps of his talents, the forward having been left out of the squad that lifted the 2018 World Cup in Russia.

The 24-year-old returned to the fold following a career-best season at Manchester United last term, scoring 23 goals in all competitions and being named as the club’s Player of the Season after being returned to a centre-forward role under Ole Gunnar Solskjaer.

Whilst those goalscoring exploits are yet to be replicated for France with just one goal in 25 appearances for Les Bleus, his recent all-round performances have seen him move into contention to become a regular starter in the side.

The forward will now be looking to cement his position for the world champions and impressed during France’s 1-0 win over Portugal in the Nations League, his improved showings earning praise from France boss Deschamps.

“He lacked in finishing – it seemed a little bit clumsy,” Deschamps admitted in an interview with TF1. “But sincerely, having watched the moments again, it came down to small margins.

“He is part of the group of players who have not been here for a long period of time, but he has changed during this period, on the pitch and off of it.

“With years, he has also gained maturity. He is much more determined – he already had quality. Things are more concrete.

“I feel a bit unfortunate for him because he was not rewarded with a goal, but he is very promising.”

Martial will now be hoping to continue his momentum when returning to Premier League action this weekend, the star set to return from a three-game suspension for Manchester United’s clash with West Bromwich Albion on Saturday evening.