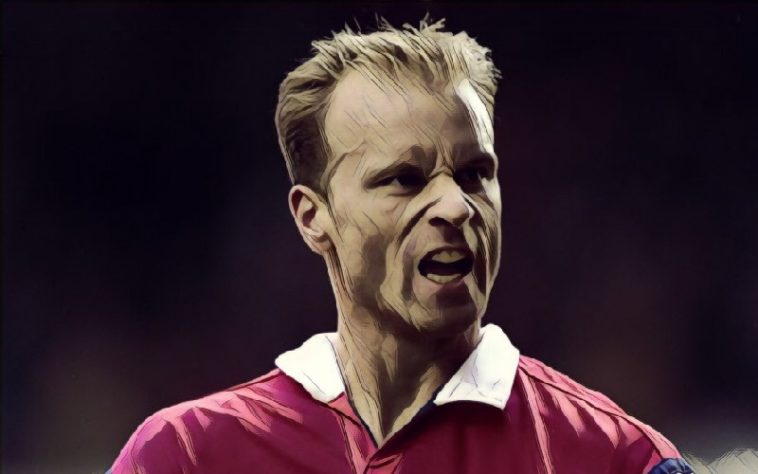 There are players in the game who transcend club allegiances. No matter who a person supports they go all misty eyed when they think of the things that player could do with the ball. Dennis Bergkamp was one of those players.

Born in Amsterdam and named in honour of Manchester United legend Denis Law, Bergkamp signed for Ajax when he was just 11 years old and learned how to play the game in their famed youth system but even then and within that group of talented players he was unique in his desire to improve his skills and understand how the ball moved. “Most of the time I was by myself, just kicking the ball against the wall, seeing how it bounces, how it comes back, just controlling it. I found that so interesting” he said of his youth.

He would strike the ball at the wall, aiming for individual bricks, hitting the ball at different angles and with varying pace, learning how the ball spun and how to control it when it came back in different ways.

Bergkamp made his full debut for Ajax in December 1986 under the management of Johan Cruyff and scored his first senior goal for the club just two months later. Over the next few years he continued to improve as a player and became an integral part of the team, eventually helping Ajax to their first title in five years when they won the Eredivisie in 89/90. The following season he bagged 29 goals in 36 games and the following season he won the Uefa Cup. By the time he left the club in 1993 he had been the league’s top scorer for three years in a row.

His exploits for Ajax rightly attracted interest from some of the biggest clubs in Europe and he settled on a £7.1 million move to Inter. Unfortunately things didn’t really work out for Bergkamp in Italy, he failed to fit in to the side and in 1995 another move was on the cards. He signed for Arsenal in June 1995 for £2.5 million, a club record. It was a transfer that would prove to be the most significant of his career and one of the most important of Arsenal’s recent history.

News of his signing caused great excitement among both the fans and the playing staff at the North London club, as memorably remembered by Ian Wright who spoke of how he went nuts after he happened to meet Bergkamp at a petrol station just after he signed.

Many believe that Bergkamp was the most important signing that Arsenal have ever made as he seemed to completely change the way they played and approached that game. The Dutchman had failed in Italy where he was often isolated but at Arsenal the team began to form around him. Though he struggled to adapt at first he soon found his footing and finished his first season with 11 goals helping the team to reach the Uefa cup with a winner against Bolton on the last day of the season.

When new manager Arsene Wenger arrived he immediately recognised his ability, those skills Bergkamp had honed playing against the wall as a child were embraced by the squad and they soon became one of the most attractive teams in the league.

Supported by a mean defence, Wright, Pires, Overmars and Henry were given free reign to express themselves with Bergkamp at the centre of it all conducting the play and dictating the way they played. he could pass beautifully, he could hold the ball up and he could score. He was incredible. He didn’t just score a lot of goals, he scored amazing goals.

Goals against a bitter rival will always win a player a place in supporter’s hearts and his stunner against Spurs in November 1996, where he turned Stephen Carr inside out with a stunning first touch before slamming the ball home, would often be enough to earn a place in a club’s folklore but that is really just a minor moment in the Dutch master’s highlight reel.

Arsenal were on the move, finishing in third place that season but by the following year they had arrived. Bergkamp’s 22 goals, including one of the greatest hat-tricks ever, led the Gunners to a league and cup double and a Players Player of the year Award for Bergkamp himself.

He continued to be instrumental in Arsenals progress. They were now established as title contenders and finished second to Manchester United the following season, bowing out of the FA Cup to the same opponents. That was the Treble Winning United side though so there is no shame in that, though Bergamp’s missed penalty did eventually lead to United’s winner.He never took another spot kick for the Gunners but his 16 goals and 13 assists prove that really was just a momentary blip.

By the 2001/02 season, Arsenal were back among the trophies when they won their second double under Arsene Wenger and Bergkamp was still scoring magical goals. In fact he may have scored one of the greatest goals of all time. It was and still is a goal that defies logic and is difficult to explain. Laying the ball off to Robert Pires, Bergkamp made his way to the edge of the Newcastle United box where he received Pires’ return.

The ball fizzed towards him, he had his back to goal and a defender tight against him but with one flick of his left boot he was away. He pushed the ball to his right, spun left and met the ball on the other side of his marker, where he showed great strength to get himself in to position to slot the ball past the ‘keeper. It blows my mind every time I watch it and again, for any ordinary player, that would have been enough to achieve hero status. But there was more to come.

He notched his 100th goal for Arsenal the following season as they retained their FA Cup title and in 2003/04 they regained their league title. Arsenal were at the peak of their powers at this time, completing the season without losing a single game.

Though they failed to retain the title the next season they did win another FA Cup and, encouraged by the fans to stay for another year, Bergkamp signed for one more season. Arsenal and the club’s fans were obviously in love with the Dutchman, in his final season at the club, which was also the club’s last at Highbury he was honoured with his own commemorative day and his testimonial was also the first game to be played at the new Emirates Stadium outside of which stands a statue of the player.

Bergkamp returned to Ajax to work as a coach upon retiring from the game but he will forever be synonymous with Arsenal and the period of success they enjoyed throughout the 2000’s. Providing Arsenal with 120 goals and a bag full of incredible memories, Dennis Bergkamp is without doubt a true Arsenal Legend.