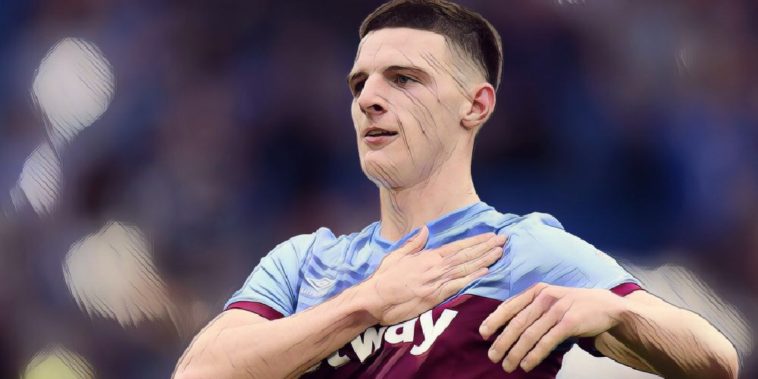 Declan Rice has revealed his happiness at West Ham, with the midfielder admitting the ‘timing isn’t right’ to leave the club.

The highly-rated youngster has made a huge impression since making his breakthrough at the London Stadium, establishing himself in the Premier League and earning senior international recognition with England following his controversial switching of allegiance from the Republic of Ireland.

The 20-year-old’s performances have seen him linked with a move to some of the division’s leading clubs, though Rice admits he is enjoying his football at West Ham and see’s no reason to leave in the near future.

When asked by FourFourTwo about reports linking him with Manchester United in particular, Rice said: “Don’t get me wrong, I think I’ve got the ability to play for a club like that.

“But it’s all about the timing and I don’t think the timing is right for me at all. I’ve still got so much to learn.

“I’m loving it at West Ham, the connection between me and the supporters is special. I’ve become one of the fans’ favourites and the manager likes me.

“It’s the best place for me to play my football.”

Rice has revealed his ambitions to be regarded as ‘legend’ at West Ham,  after committing his long-term future to the club by signing a new five-year deal in December of last year.

“I’ve signed a contract here for the next few years and I’m looking forward to playing this season and the season beyond, so we’ll just see where it goes,” he added.

“To be called a West Ham legend in the future, maybe, would be a real honour.”